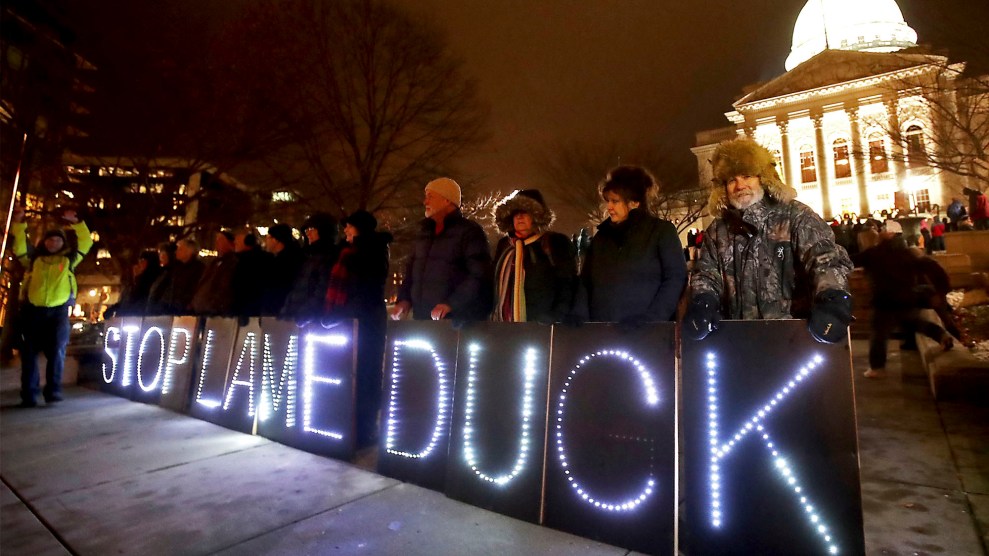 Opponents of a bill submitted by Wisconsin Republican legislators hold "Stop Lame Duck" signs at a rally outside the Wisconsin state capitol in Madison on Monday.John Hart/Wisconsin State Journal via AP

After an all-night legislative session marked by raucous debate, Wisconsin’s Republican-controlled legislature voted on Wednesday morning to limit the power of the state’s incoming Democratic governor and make it harder for Wisconsinites to vote.

The new legislation, which is expected to be signed by outgoing Gov. Scott Walker, limits the ability of incoming Democratic Gov. Tony Evers to make administrative changes to state laws and prohibits the governor from making key legislative appointments. It also prevents incoming Democratic Attorney General Josh Kaul from withdrawing from federal lawsuits initiated by the state without legislative approval, likely blocking Kaul from removing Wisconsin from a multi-state lawsuit by Republicans challenging the Affordable Care Act. The legislature also approved more than 80 last-minute appointments from Walker, many of which had never received a hearing.

One of the most controversial sections of the bill, passed during the lame-duck period before newly elected officials take office, would limit Wisconsin’s early voting period to two weeks. Currently, Wisconsin counties can decide when to begin early voting, and Democratic-leaning cities like Madison and Milwaukee allowed six weeks of early voting in 2018, which helped lead to record turnout for a midterm election.

Democrats pledged to sue, noting that the last time Wisconsin cut early voting, in 2014, a federal court struck the law down and said it was intended to “suppress the reliably Democratic vote of Milwaukee’s African Americans.”

“Wisconsin has never seen anything like this,” Evers said in a statement. “Power-hungry politicians rushed through sweeping changes to our laws to expand their own power and override the will of the people of Wisconsin who asked for change on November 6th.”

The GOP continues to disenfranchise voters in order to win and to retain power when they lose: In Wisconsin, a GOP majority passed a sweeping bill limiting incoming Dems' power by curbing early voting and shrinking the authority of the Gov. and AG.

This was the reaction. pic.twitter.com/CObmFTUxvI

Democrats won all five statewide elections in Wisconsin in 2018, and Republican leaders admitted they passed the lame-duck plan to limit the power of Democratic officials. Without the new laws, “we are going to have a very liberal governor who is going to enact policies that are in direct contrast to what many of us believe in,” said Assembly Speaker Robin Vos. (Walker criticized lame-duck sessions before he took office in 2010.)

Republicans are undertaking similar efforts to undermine Democratic power and restrict access to the ballot in lame-duck sessions in other key swing states. In Michigan, Republicans have introduced bills to take power away from the newly elected Democratic governor and secretary of state while weakening a ballot initiative enacting Election Day registration. In Ohio, which passed a major ballot initiative in May requiring congressional redistricting reform, Republicans have introduced a proposal to make it nearly impossible to put citizen-led initiatives on the ballot in the future. And in North Carolina, where Republicans first stripped power from the Democratic governor in a lame-duck session in 2016, the GOP legislature is rushing to pass a new voter ID law before Republicans lose their supermajority in January while also pushing another bill that would give Republicans control of county election boards in election years.

These lame-duck moves are part of a broader strategy by Republicans in Wisconsin and elsewhere to hold onto power by weakening the democratic process. Wisconsin’s voter ID law, which first went into effect in 2016, disenfranchised tens of thousands of disproportionately Democratic-leaning voters and helped President Donald Trump carry the state. The redistricting plans passed by Wisconsin Republicans in 2011 are among the most gerrymandered in the country: Republican assembly candidates received 46 percent of statewide votes in 2018 but retained 64 percent of legislative seats. In other states, like Arizona, California, and Florida, Republicans have falsely accused Democrats of stealing elections and called for a premature end to the counting of ballots. Meanwhile, in North Carolina, it appears that Republicans actually committed major election fraud to help a Republican narrowly win a congressional race.

The message from Republicans is clear: They’ll do what they can to give themselves a structural advantage in an election, and when those efforts fail and Democrats manage to win, they’ll pass laws to effectively nullify those Democratic victories.