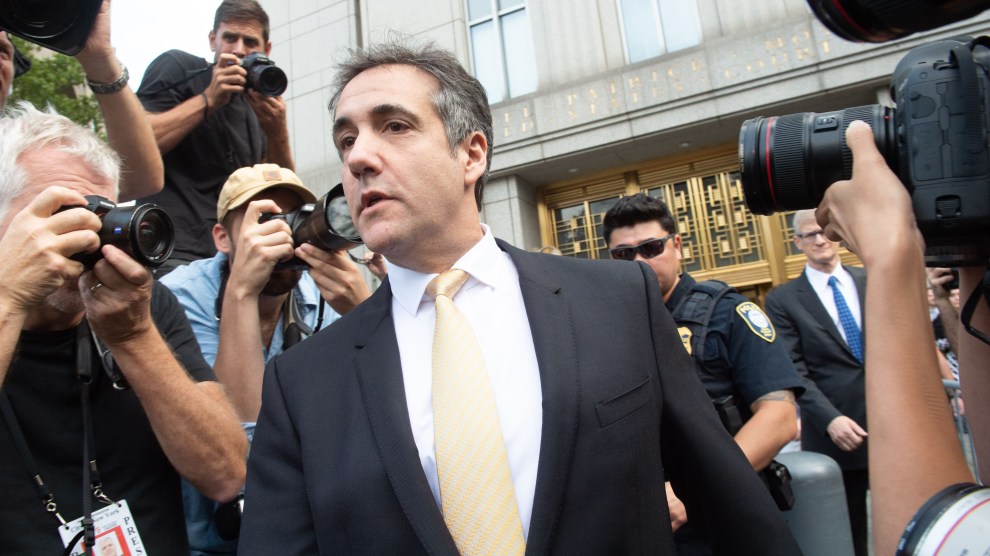 Michael Cohen, President Donald Trump’s former personal lawyer, has turned over useful information to investigators probing possible collusion between Russia and Trump’s presidential campaign, but a team of federal prosecutors says he should still be sentenced to substantial prison time. That’s according to two just-released Friday filings from New York’s US attorney’s office and from Mueller’s special counsel team in federal court. The documents, issued in advance of Cohen’s scheduled Wednesday sentencing, offer a window into the cooperation that the embattled Trump confidant has offered Mueller’s team.

In a seven-page memo, Mueller’s team said that Michael Cohen has met with them seven times, “gone to significant lengths to assist” their investigation, and provided “credible” information. This included information on “Russia-related matters” that Cohen gleaned from conversations with Trump Organization executives, and an account of outreach from a Russian national offering the Trump campaign “synergy on a government level” and proposing a meeting between Trump and Russian President Putin.

The special counsel’s filing acknowledges that Cohen provided substantial assistance to its investigation and takes no position on whether Cohen should serve time in prison. But prosecutors in New York produced a harsher document, saying that in their case against him—which is separate—Cohen has been much less forthcoming. Citing this limited cooperation, New York prosecutors recommended that Cohen receive a “substantial” prison sentence that represents only a “modest” reduction from the 51 and 63 months federal guidelines recommend, as well as a fine and the forfeiture of $500,000 of Cohen’s assets. They added that “Cohen repeatedly declined to provide full information” to prosecutors and to the special counsel “about the scope of any additional criminal conduct in which he may have engaged or had knowledge.”

Cohen first signaled he was interested in cooperating with Mueller’s team in July. The next month he pleaded guilty to making illegal six-figure payments to two different women during the 2016 campaign, to prevent them from speaking out about their affairs with then-candidate Trump. As part of a deal with New York prosecutors, Cohen pleaded guilty to two campaign finance law violations tied to the hush payments, as well as six counts related to tax and bank fraud tied to his personal finances.

In a separate agreement with Mueller’s team, Cohen pleaded guilty last month to lying to Congress about a proposed Moscow Trump Tower project. Cohen admitted to making false statements to the House and Senate intelligence committees to cover up the fact that a major Trump business venture was ongoing during the 2016 presidential election. (Trump vowed during the campaign that he had no business interests in Russia.) This revelation marked the first time that Trump’s business dealings with Russia were discussed in open court as part of Mueller’s probe—yet another signal that the special counsel may be closing in on President Trump and his inner circle.

The two Friday memos include a number of new revelations about Trump’s actions during the 2018 campaign to insulate himself from news of his affairs, and about efforts by Russian representatives to court the Trump campaign.

New York prosecutors more clearly tied the six-figure hush payments to two women—adult film star Stormy Daniels and Playboy model Karen McDougal—directly to Trump, noting that Cohen admitted that he issued the illegal funds “at the direction of” the future president. This means that federal prosecutors believe Trump directed Cohen to break the law, which itself can be a criminal act. The filing also describes how the president’s company was involved in the payments.

Mueller’s memo details a 2015 conversation between Cohen and a Russian national “who claimed to be a ‘trusted person’ in the Russian Federation.” This person offered the Trump campaign “political synergy” and “synergy on a government level” and repeatedly proposed a meeting between Trump and Putin, noting that the meeting could have a “phenomenal” impact on politics, and also on Trump’s Moscow tower venture. The person boasted there is “no bigger warranty in any project” than Putin’s buy-in. Cohen told the special counsel he did not take this person up on their invitation, in part because he was already working on the Moscow tower with another contact who had Russian government connections.

The memo also notes that Cohen shared with them useful information about “discrete Russia-related matters” that Cohen had gleaned by way of regular conversations with Trump Organization executives during the election. This appears to further contradict Trump’s statements during the campaign that he had no business interests in Russia while running for president.

You can read the full filings here or below:

Here’s one from the special counsel Robert Mueller’s office:

And here’s the other from New York prosecutors: