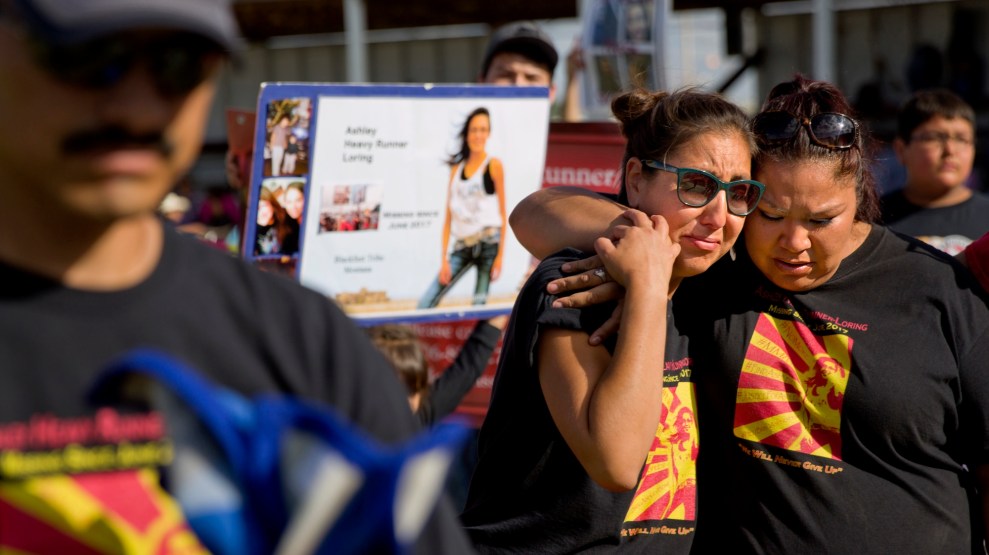 The family of a missing Native woman cries during a traditional blanket dance on a Montana Indian reservation in July. Statistics show that Native women are at greater risk of abuse or to go missing.David Goldman/AP

Taryn Minthorn was living on an Indian reservation in northeast Oregon when she was brutally assaulted by an ex-boyfriend in front of her children. Minthorn’s abuser was promptly arrested by tribal police. But because the abuser was not Native American, US federal law sent the case straight to the jurisdiction of the federal government, bypassing tribal court. The feds declined to prosecute, and Minthorn’s assailant walked free.

The reason Minthorn’s tribe, the Confederated Tribes of the Umatilla Indian Reservation, handed off the case to federal prosecutors comes down to a 1978 Supreme Court decision that stripped tribes of the authority to prosecute non-Natives for crimes committed in Indian Country. Under federal law, tribes only have sole jurisdiction in crimes in which both perpetrator and victim are Native American, and even then, the most serious crimes—including many domestic violence offenses—are automatically sent to the federal government, regardless of who is involved. The policy has long created something of a legal quagmire on tribal lands, giving them a reputation as a safe haven for many criminals. Complicating matters is that historically, the federal government has declined to prosecute many tribal cases—a problem that still continues today. In 2017, the Department of Justice declined to prosecute over a third of Indian Country cases brought to the feds.

This has all left Native women, who are disproportionately targets of domestic violence, in an extremely precarious position.

Justice for these women started to improve after 2013, when Congress reauthorized the Violence Against Women Act (VAWA) with several new provisions, including one that allows tribes to prosecute non-Natives in certain domestic violence cases. The Umatilla later implemented the new program, Special Domestic Violence Criminal Jurisdiction (SDVCJ). Last year, it returned to the Minthorn case; the perpetrator was tried in tribal court, sent to jail, and Minthorn and her children were finally able to get away. Without the help of VAWA, she would likely never have gotten justice. “To hear him saying that he was pleading to these charges, I literally felt the load come off of me, off my shoulders, off my mind, off my heart,” Minthorn told USA Today in March 2017.

But today, the landmark legislation, and the help it offers Native women, is in peril as the deadline for VAWA reauthorization looms. Funding is set to run out for the law on December 21 unless Congress strikes a compromise, which is unlikely despite bipartisan support for renewal. (Congress is also scrambling to fund a significant part of the federal government before its funding also runs out on the same day.) Part of the problem with passing VAWA is the same polarization that afflicts the rest of our politics today; for the first time in the act’s history, the main reauthorization bill has no Republican co-sponsors. But complicating matters more are Democratic legislators who are fighting to further expand the bill’s protections for Native women, saying that current law, even with the 2013 provisions, still falls short.

VAWA was signed into law by President Bill Clinton in 1994 and reauthorized with bipartisan support in 2000 and 2005. It passed again in 2013, after lawmakers inserted several new provisions regarding Native women, as well as same-sex couples and undocumented immigrants—all of which were opposed by conservative Republicans. The Native-focused provisions allowed tribal courts and police to prosecute some non-Native Americans who commit domestic violence offenses against Native American women on tribal land, which worried some on the right about potentially limiting the constitutional rights of the accused. Despite these concerns, the bill was passed, adding a necessary layer of protection to Native women who can’t find refuge in the federal court system.

“[The 2013 provisions were] a tremendous step forward and an affirmation of tribes’ authority, but they were drafted in a way in which a lot of victims were still falling through the cracks.”

SDVCJ has made progress and helped women like Minthorn, but its success has ultimately still been limited. The National Congress of American Indians (NCAI) noted in a March 2018 report that SDVCJ had led to 74 convictions of non-Native American abusers in tribal courts since 2013 and that no defendants had asked for the federal courts to review their convictions, signaling the program was working the way it was intended. But still, as of March, only 18 of the 573 federally recognized tribes in the United States had implemented SDVCJ. The slow implementation, advocates say, can be partially attributed to the challenges tribes face in adopting some of the program’s requirements, like providing free counsel to defendants who can’t afford a lawyer; many tribes have limited funds, and adhering to the regulations may require them to rewrite tribal law. Still, advocates are hopeful that more tribes will enact SDVCJ over time.

But SDVCJ has other key limitations beyond implementation. As Virginia Davis, senior policy adviser at the NCAI, notes, it only applies to domestic violence charges, which means that secondary crimes—like drug and alcohol abuse or child endangerment, which often go hand in hand with domestic violence—can’t be prosecuted by tribes if they involve a non-Native American. Davis points to another case on the Umatilla reservation in Oregon: When police responded to an instance of domestic violence by a non-Native American man against an Umatilla woman, the perpetrator, who was drunk, fled and promptly crashed his car into a neighbor’s fence. If the tribe had been able to include DUI and destruction of property charges alongside his domestic violence charge, the domestic violence case might have been easier to prosecute. What’s more, because the tribe couldn’t charge the man for his other criminal conduct, the burden of prosecution fell heavily on the victim, who changed her mind several times about whether to testify. The abuser was eventually sentenced by tribal courts to 24 months, only one of which was spent in custody. According to the March NCAI report, “Tribal prosecutors have described [the law’s limitations] as being forced to prosecute these crimes with one hand tied behind their backs.”

These shortcomings have led several lawmakers to try to further expand VAWA’s Native-focused provisions. In July, Rep. Sheila Jackson Lee (D-Texas) introduced a VAWA reauthorization bill that, crucially, would add sexual violence, sex trafficking, stalking, child violence, and violence against law enforcement officers to the list of offenses that have special tribal jurisdiction. The bill has 180 Democratic co-sponsors, but the legislation, the only comprehensive reauthorization bill introduced thus far, has given Republicans pause, particularly because it includes rules prohibiting people convicted of dating violence and stalking, not just domestic violence, from owning guns. Related bills, separate from VAWA but that specifically deal with Native issues, have been sponsored by Sen. Tom Udall (D-New Mexico) and Rep. Tom O’Halleran (D-Ariz.).

Although tribes’ right to prosecute cases like that of Taryn Minthorn isn’t dependent on VAWA being reauthorized—the provisions for tribal domestic violence cases are written into law—without reauthorization, lawmakers could be forced to draft separate legislation for the new provisions, further holding up protections for Native women at risk of abuse. Advocates are hopeful a more Democratic Congress will push the VAWA legislation through come January if it doesn’t pass now, but it’s not a sure thing. (Alternatively, Congress could pass versions of the related bills, though that seems even less likely with Republicans holding onto the Senate.)

“[The 2013 provisions were] a tremendous step forward and an affirmation of tribes’ authority, but they were drafted in a way in which a lot of victims were still falling through the cracks,” says Davis. “We really need Congress to take action.”

Although Davis thinks it’s unlikely VAWA will be saved by December 21, she’s hopeful that the bill—and an expansion of tribal jurisdiction—will in fact pass next year.

“We’re in this moment of real societal awakening about sexual violence, about violence against women,” she said, “and I think women across the country are demanding Congress do more than just change the dates on the old law.”