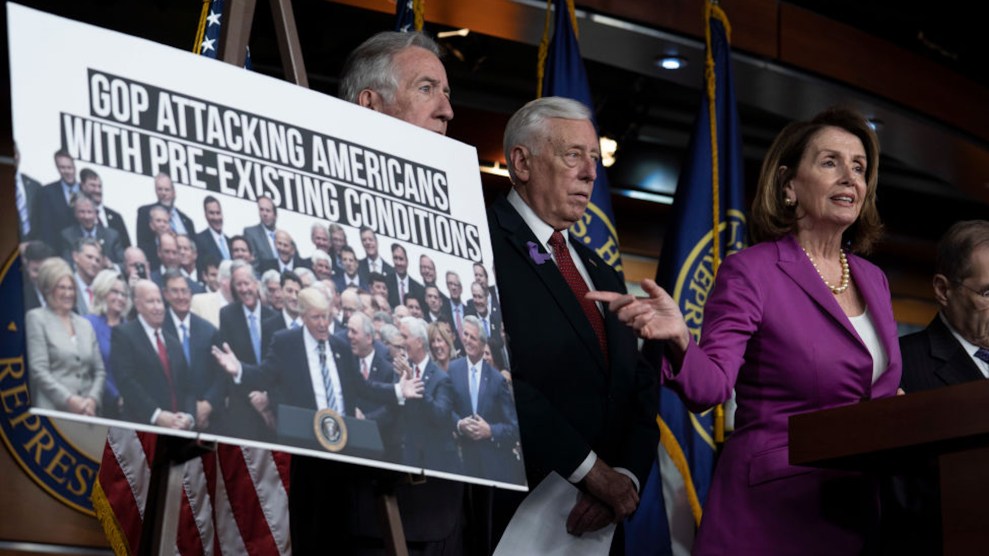 A federal judge in Texas issued a late Friday ruling finding that the entire Affordable Care Act is unconstitutional. The order came in a lawsuit filed by 20 Republican state attorneys general, who sued the federal government claiming that, because Congress eliminated last year the individual mandate that required Americans to buy health insurance, the entire law should be unconstitutional. Friday’s ruling means everything in the law—protections for preexisting conditions coverage, Medicaid expansion, provisions for young people to stay on their parents’ health care plans until age 26, even a requirement for calorie counts on restaurant menus—could be in jeopardy if it is allowed to stand.

The lawsuit, which was supported by the Trump administration, could throw the health insurance markets into utter chaos, causing millions to lose their insurance—something many Republican candidates in this year’s midterm elections promised wouldn’t happen on their watch, even as they backed the lawsuit.

In the run-up to the midterm elections, Republicans such as Wisconsin Gov. Scott Walker campaigned on dubious promises that they would protect Americans with preexisting health conditions—even as they supported the lawsuit in Texas that would gut those protections. Earlier Friday afternoon, Walker signed a set of bills passed in a lame-duck session since he lost election last month, which included revoking the incoming Democratic state attorney general’s ability to withdraw Wisconsin from the lawsuit.

Judge Reed O’Connor, who is known for issuing quick decisions in politically charged cases, appeared to sit on a decision in the Obamacare case, leading to speculation he was waiting until after the midterms to blow up the health care system in an effort to help Republican candidates. He waited just a little over five weeks after the election to issue his controversial ruling—issuing it on Friday night, just as open enrollment for 2019 Obamacare plans was coming to a close.

Liberals took to Twitter to condemn the ruling and its timing.

I'm gobsmacked. This judge honestly thinks the Constitution requires the elimination of the entire ACA — including its Medicaid expansion, its provisions about calorie counts at chain restaurants, and its new rules on biosimilars — because of an unenforceable "mandate"?

The ruling is likely to be appealed to the 5th Circuit Court of Appeals, where its fate is uncertain. President Donald Trump has appointed five new judges to that court who are extremely far-right and hostile to the ACA. But even some conservatives seemed to think the order was likely to be overturned on appeal for grossly overreaching. Conservative legal scholar Jonathan Adler agreed with Bagley, suggesting that O’Connor’s ruling was “insane” and that if it made it to the Supreme Court, it would be “lucky to get two votes.”