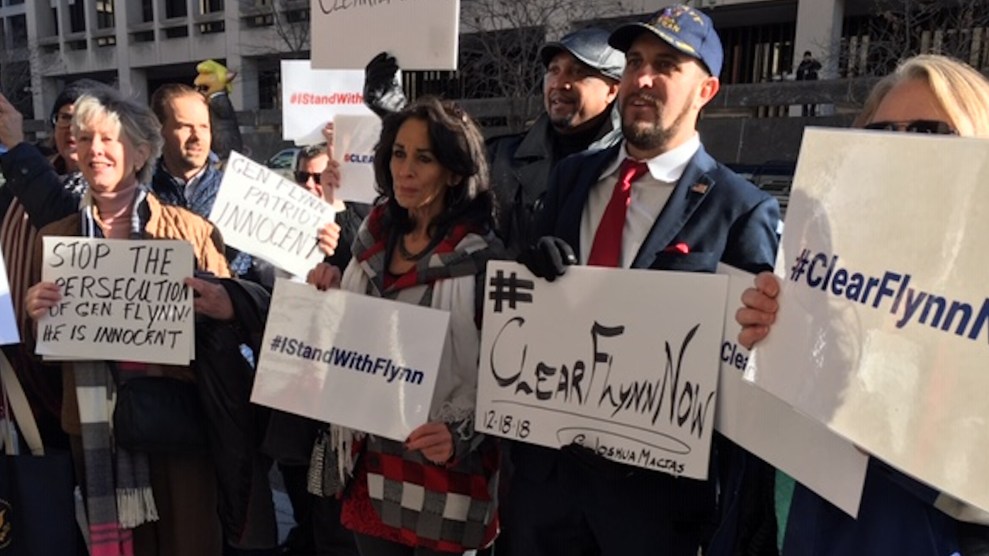 Joshua Macias, founder of Vets for Trump, and other supporters await the sentencing of Michael Flynn outside the DC federal courthouse.Stephanie Mencimer/Mother Jones

Last week, Stewart Rhodes, founder of the right-wing patriot group Oathkeepers, sent out a “call to action” requesting that members and other patriots descend on the federal courthouse in DC on Tuesday to rally in support of Michael Flynn, the former general and Trump campaign adviser. Flynn was scheduled to be sentenced Tuesday after pleading guilty to lying to the FBI about his contacts with Russia during the presidential transition. Rhodes called on his followers to stand up for Flynn’s free speech and warned that members of antifa, the militant anti-fascist group, were “expected to be there and may attempt to silence by force and intimidation, which is their standard M.O.”

For all the recent concern about rising right-wing violence and activism, though, Flynn is apparently not much of a lightning rod. On Tuesday, not even Rhodes himself bothered to show up to support Flynn. Initially, one of the few protesters at the DC federal courthouse was Chris Cox, head of Bikers for Trump.

Chris Cox from Bikers for Trump is outside the DC federal courthouse with his dog Trigger where he says he’s come to defend Michael Flynn’s family from Antifa, though admits that Antifa doesn’t seem to be here. pic.twitter.com/qRpFKMAUn4

Wearing leather chaps even though he had left his bike at home, Cox stood outside the courthouse with his German shepherd, Trigger, and explained the low turnout by saying cryptically, “This is not a soft target.” Cox told Mother Jones that he and Trigger were “here to make sure [Flynn’s] family is not assaulted or intimidated.” He conceded that there was no sign of a single anti-fascist thug anywhere in the perimeter. Indeed, the only thing even remotely anti-fascist awaiting Flynn as he left the courthouse Tuesday was an inflatable Trump rat in the back of a truck with a logo on it that said “anti-fascist.”

A few more pro-Flynn protesters eventually trickled in, organized by Joshua Macias, who founded Vets for Trump during the 2016 campaign and runs the website ClearFlynnNow.com. They held small, hand-lettered signs with pro-Flynn messages: “Stop the witch hunt now!” “General Flynn Innocent!” Macias told his fellow protesters outside the courthouse that “God’s hand is here.” When Flynn entered the courthouse, Macias and his group sang “God Bless America” while at least one counterprotester yelled, “Lock him up!”

After Flynn went inside the courthouse, I asked Macias about the signs declaring Flynn innocent, given that Flynn had admitted he was guilty and was at that moment about to be sentenced for the crime. Macias insisted the plea was the “fruit of the poisonous tree. He was pushed into a guilty plea” after special counsel Robert Mueller threatened Flynn’s family. “He did not lie. He’s an innocent man,” Macias declared, before rounding up his protesters and moving to the other side of the courthouse for further chanting. As they walked, I heard them congratulating themselves for scaring off the anti-fascists. “No antifa. We’re clear,” Macias said. “They all went home.”

“All four of them,” another quipped.

Waiting for the protesters on the other side of the courthouse was a familiar sight: Jim Griffin, a man dressed as Captain America struggling to wave a giant American flag in the wind.

Haven’t seen the Captain America flag guy since my last tea party rally. Flynn sentencing got him out again. pic.twitter.com/vmACOlhW9R

Griffin was once a staple of tea party rallies, but he says his activism has been slowed in recent years by bypass surgery and other heart problems. “The only thing keeping me going are my kitty cats,” he admitted to me. He wore an Oathkeepers patch, the only real sign of the militant group among the protesters.

The Flynn supporters had mostly petered out or gone inside for warmth by the time Judge Emmet Sullivan announced that he wouldn’t be sentencing Flynn after all. He granted Flynn a three-month delay to give the former general the opportunity to cooperate more fully with prosecutors to avoid a possible jail sentence that the judge seemed inclined to give him Tuesday. “Arguably, you’ve sold your country out,” Sullivan told Flynn. Sullivan scheduled a status hearing in 90 days, meaning the protesters will get another chance to boost their numbers, try to find some antifa guys, and do it all over again in March.