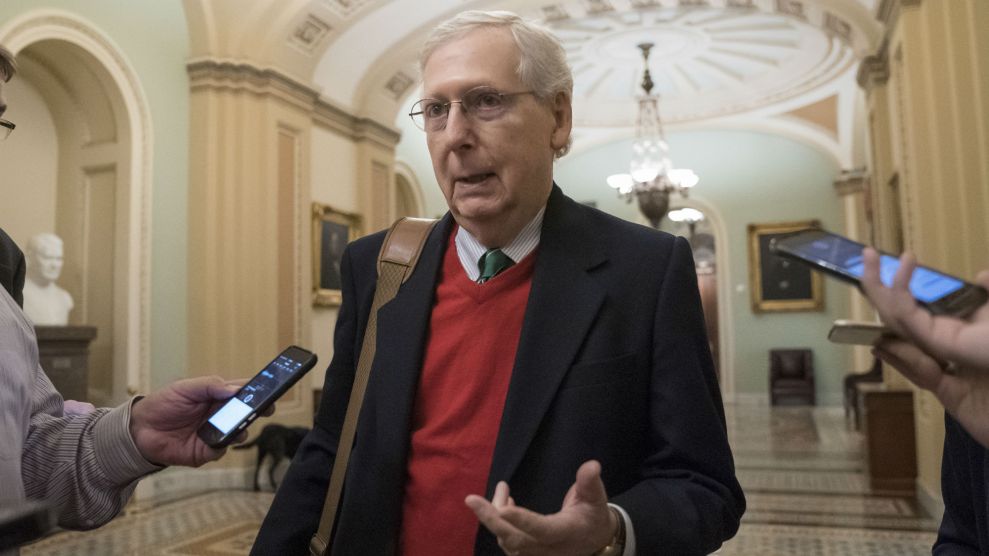 That’s what became clear on Saturday afternoon, when Senate Majority Leader Mitch McConnell (R-Ky.) closed the last-minute session of the Senate he’d called in hopes of reaching a budget agreement that would reopen the government. McConnell said that new Senate business won’t be conducted until Thursday, December 27, leaving roughly 25 percent of the government shuttered until senators return from their Christmas holiday.

Speaking on the Senate floor earlier in the day, McConnell said that the Senate won’t vote on a budget to fund the rest of the government until Trump and the Democrats can resolve their differences over the border wall.

Nine departments and dozens of federal agencies shut down Saturday after Trump upended budget negotiations this week, declaring that any funding bill he signs must include funding for a border wall. The House had passed a budget including $5 billion in wall funding on Thursday, and that version is now stuck in the Senate, where Democrats have said they will not approve any budget that includes money for the wall. Although Republicans hold a majority in Congress, they need 60 votes to pass the budget, which means some Democratic support is essential. White House officials told reporters on a call Saturday that the president will not back down from the $5 billion wall funding demand.

“We arrived at this moment because President Trump has been on a destructive two-week temper tantrum demanding the American taxpayer pony up for an expensive and ineffective border wall,” Senate Minority Leader Chuck Schumer (D-N.Y.) said on the Senate floor on Saturday. He emphasized that the Democrats are ready to work with Trump on a budget that includes funding for other border security measures, but called a wall “unnecessary” and “wasteful” and “President Trump’s bone to the hard-right people.” Schumer said that the wall-funding budget lacked even 50 votes in the Senate—implying that even some Republicans don’t support it—and urged the president to seek compromise for the sake of ending the partial shutdown.

“President Trump, if you want to open the government, you must abandon the wall, plain and simple,” Schumer said.

While Schumer and McConnell spoke on the Senate floor Saturday, Trump was having lunch at the White House with members of Congress, reportedly for the purpose of seeking compromise to end the shutdown. The only problem? There wasn’t a single Democrat at the lunch. Attendees included Vice President Mike Pence; Republican Sens. Richard Shelby of Alabama, Lindsey Graham of South Carolina, and Mike Lee of Utah; and a number of Republican congressmen who serve in the conservative House Freedom Caucus.

The White House on Friday delayed Trump’s planned departure to his Mar-a-Lago resort, where he had been set to spend 16 days on vacation over the holidays, while his wife Melania and son Barron proceeded to Florida as planned. The president’s new departure had been set, tentatively, for midday Saturday. Trump’s latest revised holiday travel plan has not been announced.