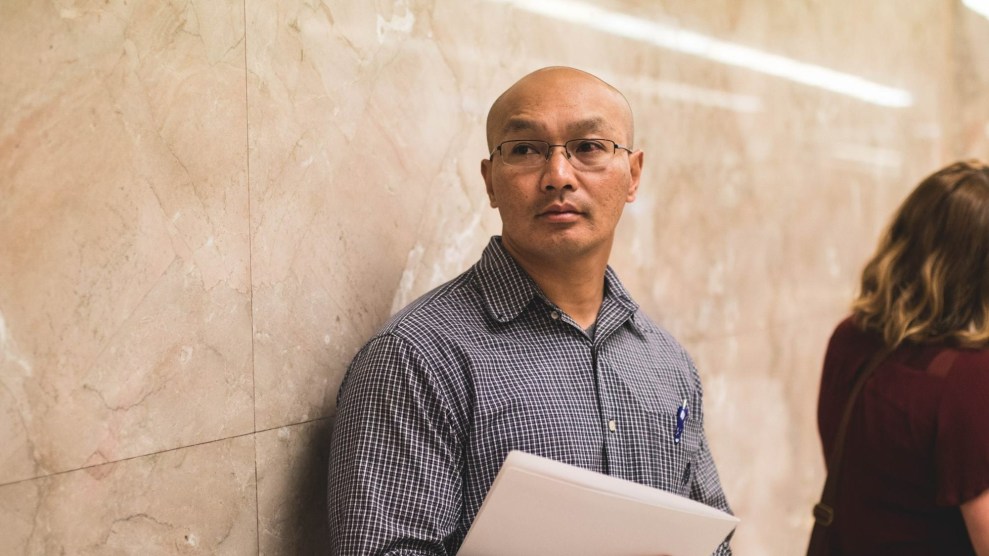 Somdeng Danny Thongsy was born 39 years ago in a Thai refugee camp, after his family had fled their native Laos following the Vietnam War. When Thongsy was two, he left the camp and resettled in Stockton, California, with his mother and older brother, leaving his father behind in Thailand. Still reeling from the trauma of war, the family found a difficult life in the United States, where they didn’t speak the language and had hardly any money to live on. Thongsy was bullied at school and, after his mother remarried, beaten by his stepfather. When he was 12, Thongsy joined a gang. When he was 17, his older brother was murdered.

Three months later, still angry about his brother’s death, Thongsy shot and killed a man and wounded two others. After being charged as an adult, he pleaded guilty to charges of second-degree murder and attempted murder and received a sentence of 27 years to life.

While he was in prison, Thongsy says, “I made a commitment to myself and to God that I’m no longer going to be that person, that horrible young man.” He started going to chapel services, then earned a GED and an associate’s degree, completing as many self-help programs as he could. He also got involved with a group that was advocating for sentencing reform so juvenile offenders like him wouldn’t have to spend their lives in jail. Those efforts eventually proved successful, and Thongsy was finally given parole after 20 years in prison.

But when he was released in December 2016, Thongsy didn’t have time to celebrate: Immigration and Customs Enforcement agents were waiting for him with handcuffs. Because of the crime he’d committed—and because he, like many refugees, had a green card but never applied for citizenship—he was ordered deported to Laos, a country he’d never once set foot in.

“I’m not sure what I would do when I get there,” he says. “I feel a sense of fear, a sense of dreadfulness.”

When he was released from prison, Thongsy didn’t have time to celebrate: ICE agents were waiting for him with handcuffs.

Thongsy is now one of more than 20 Southeast Asian refugees with criminal convictions who are asking California Gov. Jerry Brown to pardon them before he leaves office in January, in the hope of being saved from deportation. Like Thongsy, many of them are facing deportation to countries they’ve never been to or only lived in as toddlers. And many of them are more likely to be deported thanks to the Trump administration’s aggressive campaign to force countries like Laos, Cambodia, and Vietnam to accept deportees from the United States—an effort that made headlines this week when the Atlantic reported that the White House has renewed a push to deport certain Vietnamese refugees with criminal convictions who have lived in the United States for more than 20 years, despite a longstanding agreement between the two countries protecting them.

A governor’s pardon won’t automatically stop their deportations, but it will allow them to reopen their cases in immigration court. From there, refugees can usually get their deportation orders lifted, according to Anoop Prasad, a staff attorney at the Asian Law Caucus who’s representing Thongsy and some of the other refugees seeking pardons. Brown has made frequent use of his pardon power during his time in office, and before Thanksgiving he pardoned three more refugees facing deportation. That gave advocates hope he’ll offer relief to even more in a final round of pardons before Christmas.

Most of these refugees came to the United States in the 1970s and ’80s, when more than a million people fled the Vietnam War and the Khmer Rouge genocide. Many of them resettled in low-income neighborhoods with high rates of poverty and gang violence. The United States wasn’t investing much in refugee resettlement at the time, so they lacked adequate housing assistance, mental health care, and job training. Additionally, many faced hostility from residents who were still angry about the war.

Most of these refugees came to the United States in the 1970s and ’80s, when more than a million people fled the Vietnam War and the Khmer Rouge genocide.

Meanwhile, California adopted particularly harsh sentencing laws for minors in the ’90s, when some of these kids started getting into trouble with the law, and a 1996 law signed by President Bill Clinton meant that green card holders could be deported for a wider range of offenses. Some of the people now facing deportation were originally sent to prison for minor stealing offenses or joyriding, Prasad says.

In the past two decades, the United States has issued about 16,000 deportation orders to Southeast Asian immigrants, mostly for old criminal convictions. But several countries from the region have been reluctant to accept deportees. Laos still doesn’t have a repatriation agreement with the United States, and it doesn’t consider refugees like Thongsy to be citizens. As a result, Thongsy and more than 4,000 other Laotian immigrants live in the United States with orders of removal, left in limbo as the Trump administration tries to persuade Laos to take them back.

Since Laos wouldn’t issue travel documents for Thongsy after a judge ordered him deported, ICE released him from detention in February 2017 under an order of supervision, which means he has to participate in regular check-ins with the agency and could still be detained in the future. After his release, he started interning at a criminal justice organization, and eventually got a one-year fellowship with the Asian Law Caucus. He now works in field fundraising for Oakland Rising, a progressive advocacy group.

Laos still doesn’t have a repatriation agreement with the United States, and it doesn’t consider refugees like Thongsy to be citizens.

Over the summer, Thongsy’s future began to look more uncertain as the United States implemented visa sanctions against Laos—a common tactic used to persuade recalcitrant countries to accept deportees. Earlier this year, the State Department had successfully used similar sanctions to convince Cambodia to accept deportees after the country temporarily stopped because of human rights concerns. In April, this move resulted in the largest deportation of Cambodians in US history, and most of the refugees now asking Brown for pardons are Cambodian.

So far, Laos hasn’t been persuaded by the visa sanctions. But although Thongsy still has time, Prasad says seven of those asking for a pardon are scheduled to be deported to Cambodia on a flight going out next week. If Brown doesn’t act, a total of 46 immigrants will be sent to Cambodia—even more than in April. Advocates say ICE has been detaining more Cambodian immigrants immediately after a flight goes out.

Many of the refugees facing deportation have no family in the countries they’re being sent to, according to advocates, and some are supporting US citizen family members. “A lot of them have turned their lives around,” says Katrina Dizon Mariategue, director of national policy at the Southeast Asia Resource Action Center, another group advocating for refugees from the region. “In our eyes, they are not really a threat to public safety anymore.”

An ICE spokeswoman said the agency “does not exempt classes or categories of removable aliens from potential enforcement.”

In an emailed statement, ICE said it would “carefully weigh what impact, if any, the pardon has on the relevant alien’s removability or eligibility for relief from removal, and…take appropriate action consistent with the laws of the United States” in response to any pardons.

“While ICE continues to focus its enforcement resources on individuals who pose a threat to national security, public safety, and border security, the agency does not exempt classes or categories of removable aliens from potential enforcement,” wrote Lori K. Haley, a spokeswoman for ICE’s Western Region.

Though Brown has issued an unusually high number of pardons, advocates are optimistic that California’s next governor, Gavin Newsom, will be sympathetic to their cause. A new law going into effect in January will also help speed up the pardon process for people facing deportation, though that could be too late for some refugees.

Thongsy doesn’t have many options if his quest for a pardon fails. His lawyers could try to make a Convention Against Torture claim, arguing that he’ll likely be harmed if he travels to Laos. But those claims are very difficult to prove, and he wouldn’t get his green card back if he wins. In the meantime, he’s just hoping not to be picked up in the next ICE raid.

“I’m living every day with a sense of fear,” Thongsy says. “It’s a scary feeling.”

Correction: An earlier version of this story misstated where Thongsy’s father lived after his family left for the United States.