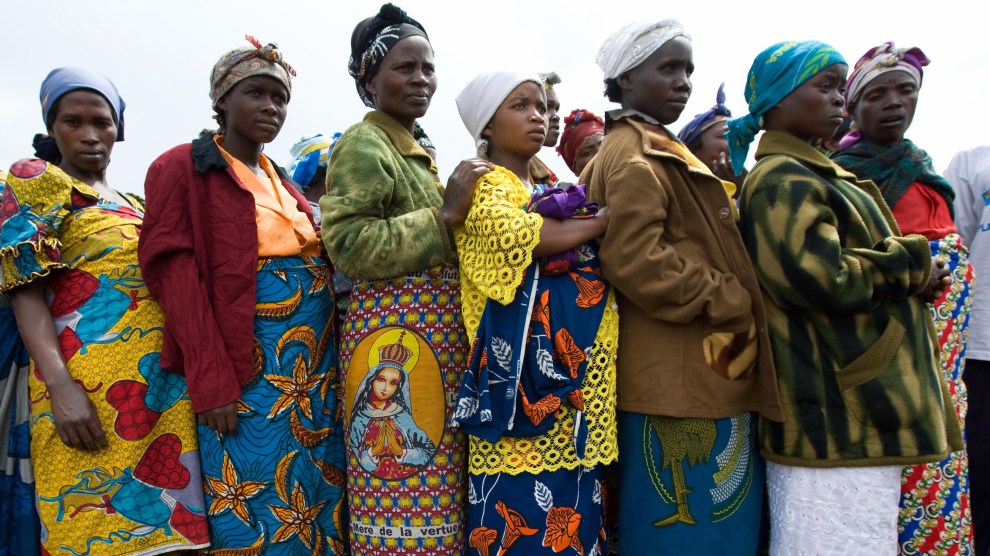 On August 1, the governor of North Kivu, a province in the northern Democratic Republic of Congo, sent out a frenzied tweet. “Urgent!!!! Urgent!!!!!” he wrote. The Ministry of Health had just confirmed an Ebola outbreak in the province. Twenty people had died since mid-July, and more cases were suspected. In a statement, the country’s health minister was clear: “The Democratic Republic of Congo is facing a new epidemic.”

For those in North Kivu, there was some hope. Since a catastrophic Ebola epidemic in West Africa three years ago, health officials have acted quickly to stop new outbreaks in their early phases. And in May, scientists unveiled an experimental vaccine which, while not yet formally approved, has proven safe and effective enough to be authorized for “compassionate use” in the event of outbreaks.

But not everyone is protected by this cutting-edge science. Even though Ebola is a severe and often fatal disease, the vaccine is not available for pregnant or lactating women because there is not enough data to show how it might affect them or their fetus. The reason there isn’t enough data? Pregnant women were excluded from nearly all the vaccine’s clinical trials.

According to a new report by medical experts, the problem is global. New vaccines are rarely designed with the specific needs of pregnant women in mind, leaving many women vulnerable to diseases which, a few months earlier, they might have been able to receive protection from. “The decision to continue to withhold this vaccine from pregnant women is not justifiable,” says Ruth Faden, a professor of biomedical ethics at Johns Hopkins University and one of the lead authors of the report. “We must listen to the voices of pregnant women in the midst of an outbreak. If they’re saying, ‘Give me the choice, I want to decide,’ how can we not respond to that? How could you not give them that choice?”

The report, penned by the Pregnancy Research Ethics for Vaccines, Epidemics, and New Technologies (PREVENT) Working Group, a team of experts specializing in disciplines including bioethics, maternal-fetal medicine, philosophy, and vaccine research, examines the urgent need to address the welfare of pregnant women in public health crises. It lays out 22 recommendations for policymakers in the United States and abroad, including directions to improve data collection so vaccines can be developed—and clinical trials conducted—with pregnant women in mind. In the event of an outbreak, the experts say, maternal and neonatal health experts should be closely consulted, and decisions should be informed by the perspective of affected women themselves—many pregnant women, Faden says, would likely opt into research to protect them and their babies, born or otherwise, from disease. And during an epidemic, the default should be to offer vaccines to pregnant women, not the reverse.

“We have got to make sure that pregnant women remain top of mind as people are planning for the next bad outbreak,” Faden says. “When the world is investing in the development of vaccines for emerging disease like Ebola, there must be a clear commitment to ensuring that there will be vaccine types that pregnant women could be given.”

There has historically been a hesitancy to include pregnant women in vaccine research because of the theoretical risk that active material in “live” vaccines could be transmitted to the fetus. But vaccinating pregnant women should be a priority, Faden says, as there is evidence that “pregnancy may make women more susceptible either to becoming infected, or more likely to do poorly should they become infected.” For some pathogens, like influenza and malaria, pregnant women are at significantly higher risk of serious disease and death. And, of course, suffering an infection during pregnancy can potentially harm two lives.

“There must be a clear commitment to ensuring that there will be vaccine types that pregnant women could be given.”

In the United States, pregnant women receive many routine vaccinations including diphtheria, tetanus, and hepatitis B, while other vaccines are offered if a doctor believes it to be in the patient’s interest. Many of these vaccines are “killed” vaccines, which do not include live viruses. Pregnant women are told to avoid some vaccines, including those for measles, mumps, and rubella and chickenpox, because of contraindications, the theoretical risk of transmission to the fetus, or because its effects on the fetus are unknown.

While women are often able to plan vaccinations before a pregnancy, that option is complicated during a sudden outbreak. Pregnant women are currently prevented from receiving vaccines for infectious diseases including Zika, Lassa fever, and hepatitis E: illnesses which can seriously harm women and their fetuses. Hepatitis E can cause sudden liver failure in women during their third trimester, while Lassa fever also affects pregnant women more severely than non-pregnant patients. Zika, meanwhile, is well known for causing microcephaly, a birth defect where a baby’s head is smaller than expected. Babies with microcephaly often have smaller brains that might not have developed properly.

Experts acknowledge the risk that may exist to a fetus should a pregnant woman receive a live vaccine. But that risk, Faden says, must be put into context during an outbreak. Researchers have found that out of every 100 pregnant women to contract Ebola, between 89 and 93 will die, compared with a 70 percent fatality rate for non-pregnant women, and an overall fatality rate of roughly 78 percent. The same data showed the virus was fatal to every single fetus. “You have to take into account not only the possible theoretical risks of taking the vaccine, but also the risk to the pregnant woman and her baby if she’s denied that opportunity,” Faden says.

Her team has recommended improvements to infectious disease surveillance systems, noting that case reports should routinely include pregnancy status and track the health of mothers and newborns. Pregnant women should also be able to take part in clinical trials, should they give “voluntary and informed consent,” the researchers said.

While the outlook may seem bleak, some research does show promise. In California and Uganda, scientists are working to develop a malaria vaccine for pregnant women, who are three times more likely to suffer from a severe form of the disease than those who are not pregnant. In the United Kingdom, a project is underway to find a vaccine to protect pregnant women against Zika, while a vaccine candidate for Lassa fever—an infection that raises the risk of miscarriage—is likely to be safe enough to administer to pregnant women if it is approved for human testing.

But there are far fewer vaccines in development for pregnant women than for the general population, and none that would protect pregnant women from Ebola. Nonetheless, in North Kivu, pregnant women and new mothers living with the fear of Ebola have made themselves clear. In recent interviews, women “clearly articulated that they wanted to choose whether to be vaccinated or not,” according to a recent UNICEF report.

“Now there is no option,” one woman said. “You just send us to death.”