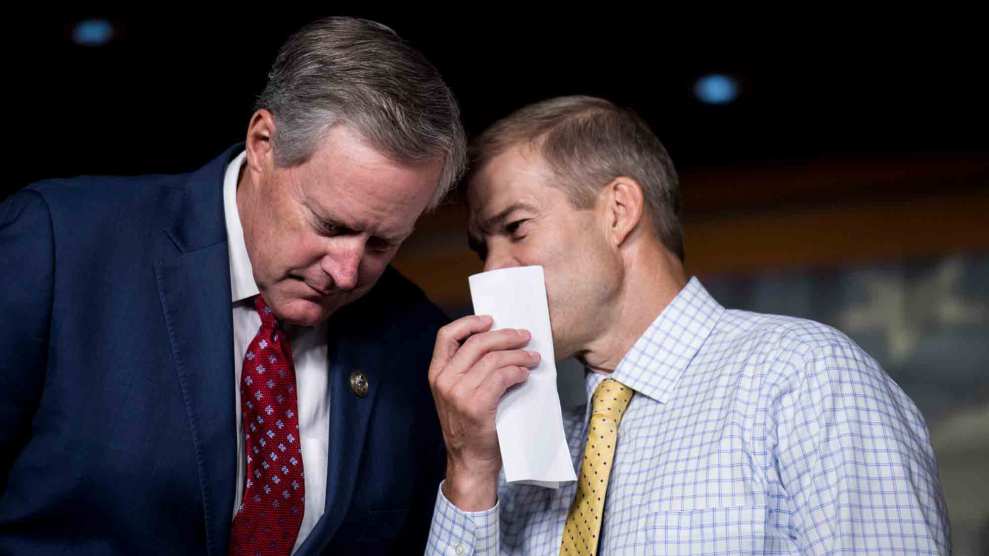 What happens when the politics of personal destruction intersect with a Trumpian conspiracy theory? Unfortunately, I’ve seen it, thanks to House Republicans who, with the help of conservative media, have waged an unfounded crusade against a former FBI official named James Baker.

This campaign has been underway for over a year, as part of the larger GOP effort to distract attention from the core components of the Trump-Russia scandal, namely Moscow’s attack on the 2016 election to help Donald Trump and interactions between Trump’s circle and Russia. As I wrote nearly a year ago, Rep. Jim Jordan (R-Ohio), one of the chief distractors, had penned a column for the right-wing Newsmax suggesting that Baker, who had been the general counsel for the FBI, had clandestinely passed me what we now call the Steele dossier: the series of private memos written by a former British intelligence officer that contained allegations that Moscow had a covert project to cultivate and co-opt Trump and that the Trump camp had secretly communicated with the Kremlin. (Yes, the documents also referenced the alleged pee tape.) I had published an article on October 31, 2016, that first revealed the existence of the Steele memos and the FBI’s interest in his reports. And this was Jordan’s point: Baker, on behalf of the bureau, had slipped me these documents as part of a secret FBI operation to thwart the election of Trump. Here was the Deep State at work! And I was a cog in its dirty-tricks machine.

The Baker testimony is not a bombshell that supports Team Trump’s unfounded claim that the real story is that Trump has been the target of a FBI-led government conspiracy. And Baker does not deserve to be turned into red meat for the right by the Dear Leader brigade at Fox News and other conservative outlets.

Well, no. When House Republicans first tried to float this conspiracy theory in December 2017, I noted that Baker, a veteran Justice Department official whom I have known for years, had not been a source for me on this article. Reporters tend not to discuss their sources, but in this instance I believed it was important to counter the dissemination of inaccurate information, especially information that was being used to demonize Baker, an innocent and dedicated civil servant. I did send a copy of the Steele memos to Baker a week after I had posted the article on them. (My story had reported that Steele, whom I had not identified by name, had already provided copies to the bureau.) I asked if anyone in the bureau could talk to me about the documents. That’s what reporters do. No one at the FBI would. End of story.

But not for the tinfoil-hat-wearing Republicans and their accomplices in the right-wing media. In October, Jordan and his partners-in-diversion, including Rep. Mark Meadows (R-N.C.), called Baker to the House for two private grilling sessions. And now conservatives are using a portion of the unreleased transcripts from those interviews to shift attention from the Trump-Russia scandal to one of their favorite tangents: how the FBI handled the Steele memos.

Their latest stab at pushing the Baker-Corn-Steele conspiracy theory is based on a portion of the Baker interviews when he was questioned by Jordan. The congressman was pressing Baker on whether he had given me any information, and Baker’s attorney, Daniel Levin, interrupted to say Baker couldn’t discuss his interactions with reporters. The key exchange:

Jordan: So he [can] talk to me only about what Mr. Corn may have gave him via information or actual documents or recordings or anything else, but he’s not allowed to talk to me about information he may have given to Mr. Corn himself?

Levin: That’ s right. As a general matter, that’s right. I mean, if you want to ask specific questions we can figure it out. But as a general matter, I am not comfortable having him talk about things he has said to reporters while the Department [of Justice] still has an ongoing investigation.

Levin was referring to a criminal leak investigation that involved Baker. He did not disclose what this probe was focused on. He did say that it was being mounted by John Durham, the US attorney in Connecticut who once investigated the CIA’s destruction of videotapes of interrogation sessions that involved torture.

Jordan and Meadows have gone to town with this, writing Durham this week and demanding information on the investigation of Baker. And right-wing media outlets have pounced on this as yet another sign of a deceitful get-Trump cabal within the FBI. Following the lead of Jordan and Meadows, Byron York, in the conservative Washington Examiner, asserted that the leak under investigation by Durham “appeared to be dossier-related.” York claimed that the Baker testimony “revealing the criminal investigation is a new and important part of the story of the FBI’s handling of the Trump-Russia investigation.” (The headline of his piece: “FBI interview makes big news—so why is it still secret?”) Another Examiner article insinuated that the leak was connected to Baker’s relationship with me. The Washington Free Beacon reported that this was the “first confirmation Baker was the subject of a criminal leak probe.”

Fox News has especially gone batty over this. In a “Hannity Watch” on the “Deep State,” Fox News’ Sean Hannity breathlessly declared the Baker news “a major development” and exclaimed, “Baker has long faced scrutiny over his ties to Mother Jones reporter David Corn. Remember, Corn was the first journalist to report the existence of Christopher Steele’s dirty dossier in the lead-up to the 2016 presidential election.” Laura Ingraham huffed, “James Baker himself is under investigation for media leaks against President Trump. It turns out he was in regular contact with Mother Jones leftist writer David Corn. Are they still publishing? Well, it’s just a coincidence, I’m sure. Remember, Jones was the first to report on that phony Steele dossier—you know, the thing that was a predicate used to start the entire Trump-Russia probe.” And on Fox News, Jordan stated that it “looks like” Baker had leaked information “relative” to the Russia investigation. He contended that the “real news” is FBI misconduct, not Moscow’s attack or Trump connections to Russia.

But none of this hyperbolic yammering was justified, for the leak investigation cited by Levin was not related to the Russia investigation, the Steele memos, or me. And there was even a question whether the Durham probe was still active in regards to Baker. In December 2017, the Washington Post reported, “Baker had been caught up in a strange interagency dispute that led to a leak probe and attracted the attention of senior lawmakers, but people familiar with the matter said the probe had recently ended with a decision not to charge anyone.” (The Post also described Baker as “one of the most trusted, longest-serving national security officials in the government.”)

Persons familiar with the Durham investigation have confirmed to me that this leak inquiry was not connected to the Steele dossier or Baker’s interactions with me. (Once again, Baker was never a source for me on the Steele memos or the FBI’s Russia investigation.) These sources also say they believe the portion of the investigation concerning Baker is indeed done. And, for the record, I have not been contacted by Durham or anyone working on his probe.

The Baker testimony is not a bombshell that supports Team Trump’s unfounded claim that the real story is that Trump has been the target of a FBI-led government conspiracy. And Baker does not deserve to be turned into red meat for the right by the Dear Leader brigade at Fox News and other conservative outlets.

His testimony, though, has made real news. The recent blockbuster New York Times article revealing that the FBI in May 2017 opened a counterintelligence investigation into Trump included a statement Baker made during his closed-door House interviews. He had explained why Trump’s firing of FBI chief James Comey was considered within the FBI a blow to national security: “Not only would it be an issue of obstructing an investigation, but the obstruction itself would hurt our ability to figure out what the Russians had done, and that is what would be the threat to national security.” CNN obtained other portions of the Baker interviews in which he stated that in 2017, FBI officials were contemplating whether Trump, in regard to Russia, was “acting at the behest of and somehow following directions, somehow executing their will.” Baker added, “I’m speaking theoretically. If the president of the United States fired Jim Comey at the behest of the Russian government, that would be unlawful and unconstitutional.”

Jordan, Meadows, York, and the inhabitants of Planet Fox refuse to recognize that the scandal at hand is about Trump and Russia.  Instead, they conjure up alternative realities, desperately prop up competing controversies, and cavalierly toss about false claims to protect Trump and his crew and to prevent a full accounting of an unprecedented attack on American democracy. In this episode, Baker has been a victim of their fact-free hit-and-run skullduggery. But more important, the American public is also a victim, as this crowd casts about conspiratorial diversions to hide the truth that they—and Trump—cannot handle.