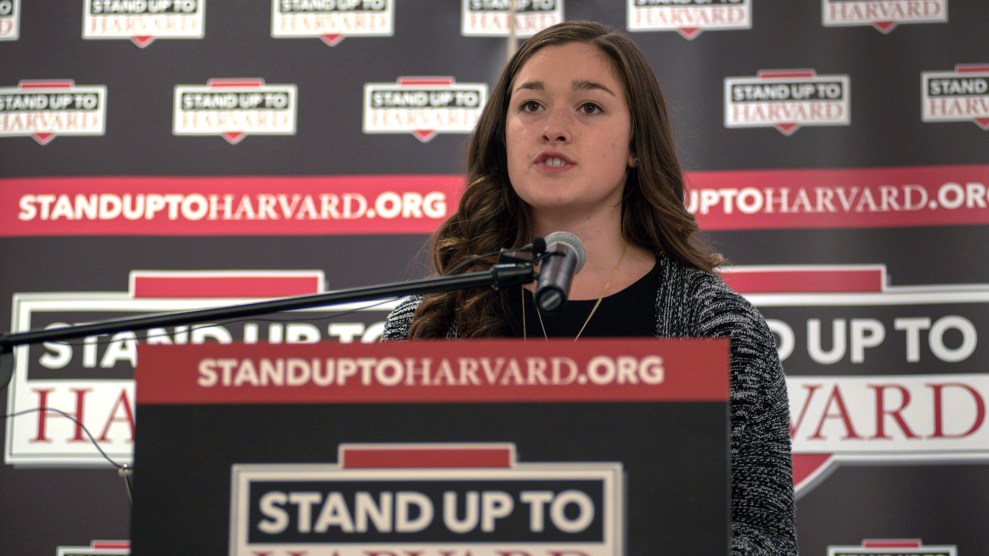 Rebecca Ramos, a 2017 graduate of Harvard University and former president of its chapter of the Delta Gamma sorority, speaks at a news conference. Collin Binkley/AP

When Rebecca Ramos first joined the Delta Gamma sorority during her freshman year at Harvard University in 2014, she wasn’t sure how involved she wanted to get. But she found a closeness and support system in her sorority, one of several women-only Greek organizations and clubs that formed at the university in the early 1990s in response to a social scene that had long been dominated by clubs that only admitted men. “Frankly speaking, throughout my time at school, Harvard is a hard place to be, and it’s a hard place to be female,” Ramos recalls.

In 2016, the school blew up its small Greek scene when it introduced a sanctions policy that penalized members of single-gender organizations, criticizing them for “enacting forms of privilege and exclusion at odds with our deepest values,” as then-President Drew Faust wrote. Some groups went co-ed, but others closed their doors. Nearly all of Harvard’s nine women’s groups ceased to exist as single-gender clubs.

In 2018, a year after Ramos graduated, Delta Gamma’s Harvard chapter disbanded. Now, the sorority is one of six Greek letter organizations suing Harvard in state and federal court, arguing that its sanctions on frat and sorority members violate bans on gender-based discrimination and free association. Legal experts expect that the lawsuits, which come amid growing calls to eliminate, reform, or limit Greek organizations on campuses nationwide, will have far-reaching implications on how gender discrimination laws are applied to colleges and single-gender clubs.

Legal experts expect that the lawsuits will have far-reaching implications on how gender discrimination laws are applied to colleges.

The North American Interfraternity Conference and the National Panhellenic Conference, which oversee the majority of college fraternities and sororities, are publicly supporting the Harvard lawsuit. “We feel that if we did not pursue the rights of our students to join organizations, other universities would feel like they could follow suit and do what Harvard has done,” Carole Jones, chair of the NPC, told Mother Jones. “We’re being proactive so that other universities know they cannot put in place the same policies.”

Harvard announced its sanctions policy following the release of a report that scrutinized final clubs’ role in campus sexual assault. (An earlier survey found that nearly half of female seniors who participated in final clubs reported non-consensual sexual contact, as opposed to 31 percent of all senior women.) The report’s authors identified single-gender groups as a problem area and called out the “deeply misogynistic attitudes” of the final clubs. In May 2016, the school issued an ultimatum to single-gender groups: Go co-ed, or their members would be blocked from receiving endorsements for prestigious scholarships or taking leadership positions in sports teams or university-recognized clubs. (Harvard’s final clubs and other single-gender organizations cut all official ties with the university in 1984, when Harvard demanded that they admit women.)

The policy sparked an immediate backlash, with many critics fearing it would disproportionately affect women’s groups. About a quarter of Harvard’s undergrads at the time were members of a single-gender social club, nine of which were for  women, and 12 for men. Days after the policy was announced, Ramos helped organize a demonstration against it, which drew hundreds of women into Harvard Yard. “It was spearheaded by a group of women, most of whom were in sororities, but it was also joined by women who valued the existence of women’s groups and their right to exist,” she says. While some single-gender organizations avoided the sanctions by going co-ed, sororities could not admit men without violating their national organizations’ rules and being subsequently disbanded. (One sorority, Alpha Phi, returned to campus as the sole women-only social organization in November.)

Both suits allege that the school’s policy discriminates against both men and women who join all-male or all-female groups. By placing the blame for sexual assault on all-male organizations and contending that single-gender organizations subordinate women, the school is relying on sexist stereotypes, the lawsuits argue. “Discriminating against someone because that person does not walk, talk, or dress like a stereotypical man or woman is sex stereotyping of this sort,” the federal complaint reads. “So is discriminating against a person because he or she chooses to join a single-sex rather than co-ed social club in college, in defiance of stereotypes about how ‘modern’ men and women should behave.”

The suit alleges that Harvard penalizes “men who choose to socialize with men” and that the school “acted out of bias against men.”

The federal complaint against Harvard alleges that the school’s policy disproportionately affects certain male students “for no other reason than because they are men who choose to socialize with men,” concluding that the school “acted out of bias against men.”

Rachael Dane, a Harvard spokeswoman, says that the sanctions policy’s goal was to dedicate the school’s resources to groups that focus on inclusivity and to diminish the negative impact of single-gender groups. “For more than a century, Harvard has not had a Greek system on campus,” Dane says. “It is the expressed expectation of this community that Harvard should not become a Greek school. Harvard should not have to change its commitment to non-discrimination and educational philosophy for outside organizations that are not aligned with our long-standing mission.” Harvard is expected to file a response to both suits in February.

Peter Lake, an education and law professor at Stetson University, says that the Greek lawsuits are evidence of a more aggressive reinterpretation of Title IX, a shift that has gained support from the Department of Education under the Trump administration. Previously, suits have argued that Title IX protects women from sex discrimination, but Lake notes that a complementary argument can be made that the law entitles individuals—including men—to protections based on gender. “The next generation of Title IX argument is a much broader equity argument,” Lake says. “I wouldn’t even be surprised a little bit of [the men’s rights argument] gets introduced in this case. They could argue that women’s groups get overt protections, but if men don’t, isn’t that discriminatory against them?”

That strategy has already been used by activists for men’s rights on campus, with the most high-profile cases centering on how schools handle sexual assault cases and the rights of the accused. Other activists have lodged complaints against universities for their women-only scholarships and programs, arguing that these efforts to support female students discriminate against men. Under Education Secretary Betsy DeVos, the department has opened formal investigations into four schools in response to complaints that women-only and women-focused programs are unfair to male students.

As a private institution, Harvard has more freedom in crafting its policies than a public school. Tim Burke, a lawyer at Fraternal Law Partners, whose work focuses on fraternities, sororities, and other student life organizations, notes that most public schools would not have pursued a similar sanctions policy for fear of violating students’ rights of association under the First Amendment. Yet in the state case filed against Harvard, the plaintiffs allege that the school has violated freedom of association guaranteed under the Massachusetts Declaration of Rights. This approach mirrors that of a pending case in which Greek letter organizations are suing the University of Southern California for a policy that prohibits freshmen from joining sororities and fraternities until their second semester.

In Cambridge, rulings in favor of either Harvard or the plaintiffs would affect how similar policies are formed and challenged in the future. In the federal case, Lake says, a win for the Greeks would affect nearly every school in the country as a new precedent under Title IX. “If they win in either of those cases, I think it will discourage other universities from trying to follow the Harvard path,” Burke said. “That may slow down the effort in schools that are looking to do away with single-gender organizations.”