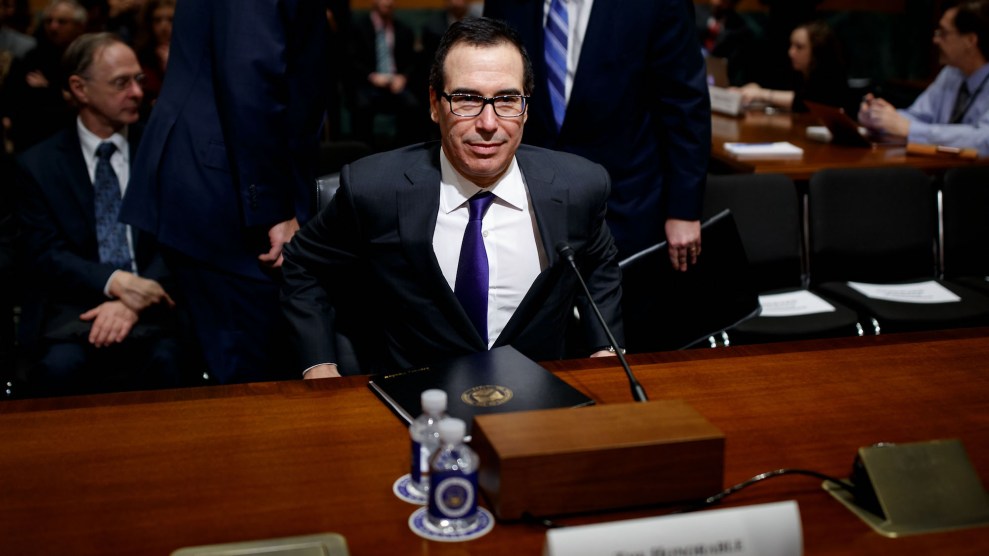 House Democrats are demanding answers from Treasury Secretary Steven Mnuchin on why his agency removed companies owned by Russian oligarch Oleg Deripaska from its list of sanctioned companies last month. Deripaska, who is close to Russian President Vladimir Putin, made his fortune through his control of Russian energy and aluminum companies, several of which were placed under strict sanctions by the US Treasury Department in April 2018. At the time, Mnuchin said that the sanctions—which also hit six other Russian oligarchs—were in response to the Russian government’s involvement with “malign activity” around the world and the reality that oligarchs “profit from this corrupt system.”

In December, Treasury announced it was planning to lift the sanctions on Deripaska’s companies on January 19, after Deripaska agreed to divest large portions of the three companies he owns—En+ Group LLC, a large mining and energy conglomerate; UC Rusal PLC, one of the largest aluminum mining companies in the world; and JSC EuroSibEnergo, Russia’s largest private power company. The Democratic chairmen of five House committees sent a letter to Mnuchin on Tuesday asking him to meet with them to explain the decision to remove the sanctions.

While Deripaska has indeed agreed to give up control of portions of his companies, the Democrats pointed out he will retain significant ownership of them—for example, he will reduce his stake in En+ from 70 to 44.95 percent. The letter from Democrats also noted that Deripaska is transferring the shares of his sanctioned companies to VTB Bank, which is majority-owned by the Russian government and also sanctioned by the US government. Sanctions experts, however, say that VTB is on a different sanctions list than Deripaska’s companies. Under the sanctions targeting the Russian oligarch, Americans were prohibited from doing business with his firms, says Peter Harrell, who worked on sanctions at the State Department during the Obama administration. VTB Bank, on the other hand, Harrell says, is on a list which limits its access to capital and loans, but doesn’t bar Americans from doing business with the bank.

Mnuchin will provide a classified briefing to lawmakers Thursday on the decision, according to Politico.

Under the law, Congress has 30 days from the announcement of the sanctions delisting to counter the move. Harrell says that to block the decision, both houses of Congress would have to pass resolutions opposing the delisting—and by majorities that can survive a potential Trump veto. By giving the 30-day notice of delisting on December 19, just days before the end of the last Congress, the administration made it harder for congressional opposition to organize, Harrell says.

“It’s going to be a challenge, particularly in the Senate, where it’s not even clear to me that Mitch McConnell would be willing to hold a vote on such a thing,” he says.

In their letter, Democratic lawmakers asked Mnuchin to extend the amount of time Congress has to consider the issue.

Deripaska has come under scrutiny in connection with the Trump-Russia scandal. The Associated Press has reported that in 2005, Paul Manafort signed a $10 million deal to lobby for Deripaska. Deripaska subsequently sued Manafort for allegedly absconding with a $19 million investment. During the presidential campaign, Manafort offered, through an intermediary, to provide Deripaska with private briefings on the presidential campaign in an apparent effort to repay his multimillion-dollar debt to the Russian magnate.