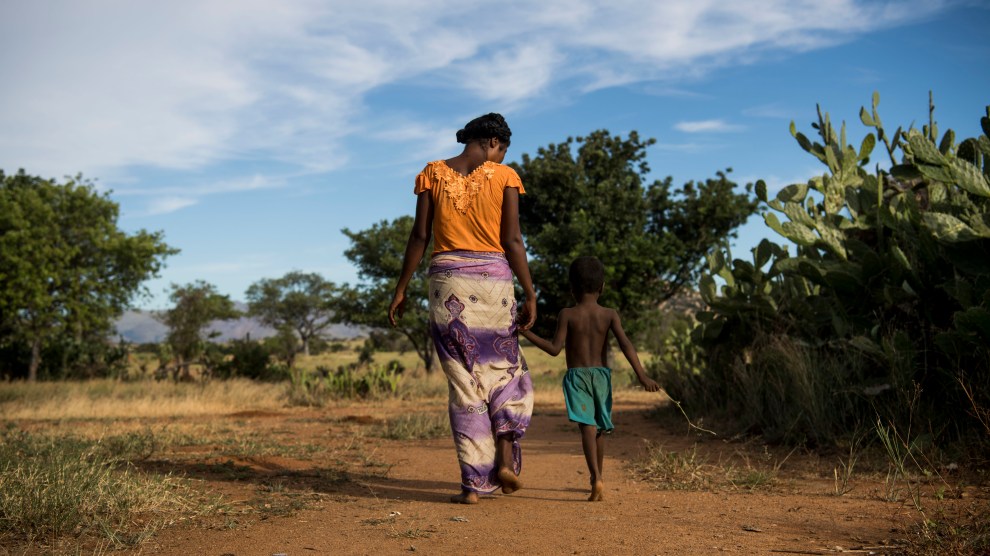 Nana, 24, walks back to her home in Betsingilo, Madagascar, with her five-year-old son. She has two children and recently received a birth control implant from a Marie Stopes International mobile clinic. Carolyn Van Houten/Washington Post/Getty Images

In early 2017, Family Health Options Kenya (FHOK), the longest-running network of family planning clinics in the African country, faced a dilemma. For five decades, the organization had helped the community’s most vulnerable with services like HIV, testing, cervical cancer screening, free contraceptives, and abortion counseling and referrals.

But that year, as one of his first acts in office, President Donald Trump banned federal aid for international organizations that so much as talk about abortion. So Family Health Options had to decide: stop offering abortion referrals and education to patients in need or lose $2 million in international aid. “It was a catastrophe,” Melvine Ouyo, a nurse and then a Family Health Options clinic director in Nairobi, said. Ultimately, her organization decided it couldn’t sacrifice the quality of care it provides to patients and refused to agree to the Trump administration’s new stipulations. “As someone who has ethically declared that I will provide these services, I don’t discriminate against which service to provide and which not to provide.” Ouyo said. “As long as the patient comes to me seeking my help, I can provide it.”

Soon, the organization’s 16 clinics began to run out of contraceptives. More women sought help for unplanned pregnancies. In August 2017, seven months after Trump’s policy was implemented, FHOK saw its first clinic close: a center in Mombasa that had provided free services to marginalized communities, including drug addicts and sex workers. By then, the organization had also ceased most of its outreach efforts, which had brought care to another 76,000 women in remote parts of the country annually. Two more clinics were shuttered the following year, and those remaining saw staff numbers continue to drop drastically, Ouyo said. When she left the organization last May to pursue an advanced degree in reproductive health policy at Harvard University, her closest clinic was staffed by a single nurse. “He would act as the pharmacist, the person in the lab, the person at reception, as well as the clinician to see the patients,” Ouyo said. “He was basically doing everything.”

Women in Latin America were three times more likely to have an abortion under the global gag rule.

When Trump signed an executive order to reinstate the memorandum known as the global gag rule in January 2017, its effects were designed to be felt by people like Ouyo, who serve communities in some of the world’s poorest provinces. Proponents said the policy, first pushed by anti-abortion activists during the Reagan administration, would reduce the number of abortions in developing countries. The ban has been dismantled by every Democratic president, and reinstated by every Republican, since.

But research published in November shows that, in some countries, the global gag rule backfires spectacularly. Between 2001 and 2008, when the gag rule was in effect under former President George W. Bush, women in Latin America, for example, were three times more likely to have an abortion, according to the book The Global Gag Rule and Women’s Reproductive Health by Yana Rodgers, professor and director of the Center for Women and Work at Rutgers University. Rodgers looked at data from 51 countries, covering roughly 6.3 million women and making her analysis the most comprehensive on the effects of the global gag rule to date. Latin America wasn’t the only region that saw a jump in abortion rates under Bush’s gag rule; women in sub-Saharan Africa were twice as likely to terminate their pregnancies.

“To find it tripled in Latin America was startling,” though not entirely surprising, Rodgers told Mother Jones. The gag rule severely restricts funding for health clinics providing contraceptives, and as a result, many of those clinics were forced to reduce services or close altogether. “It means less contraceptive access, and probably more unintended pregnancies,” Rodgers says. That’s what Ouyo noticed at her clinic: A shortage of contraceptives caused by the gag rule has driven more women to her clinic with unplanned pregnancies. “I was recently counseling a woman who had missed her Depo [birth control] injection” after her local clinic ran out of supplies, Ouyo said. Four months pregnant, the woman was living in a Nairobi slum with her husband and a baby. She didn’t know how she would provide for another child. In the past, researchers have looked at the global gag rule’s effect on specific countries in isolation. In 2011, researchers at Stanford University were the first to measure the effect of the policy anywhere on the ground. Focusing only on sub-Saharan Africa, those researchers also showed that the number of abortions increased in countries where US support for nongovernmental organizations was cut the most.

Rodgers’ research also suggests that, because there were fewer clinics providing abortion services, women in Latin America and sub-Saharan Africa increasingly turned to higher-risk and unsafe methods, such as black-market abortion pills and other at-home procedures, to terminate their pregnancies without the help or advice of medical professionals. Recent estimates suggest that at least 22,000 women die annually from complications after unsafe abortions, according to the Guttmacher Institute, a think tank that researches reproductive health.

Rodgers found no effect on abortion rates in Eastern Europe and Central Asia, and her research showed that women in South and Southeast Asia were slightly less likely to have an abortion under the global gag rule.

The United States is the world’s largest provider of global health aid. While the original gag rule banned international clinics from using US money toward abortion services, the Trump administration’s order goes a step further by barring clinics from receiving US aid if the clinics provide any type of abortion service, including referrals, regardless of whether the federal money goes to those services. In other words, as Human Rights Watch has explained, a clinic receiving half of its funds from non-US sources to provide services related to abortion and the other half from the United States to provide vaccinations for babies could lose its US funding—and with it, its vaccination program—under the new policy. The new gag rule puts all $8.8 billion of US global health aid at risk, up from approximately $600 million in family planning funding under previous administrations.

“There’s no question that a global gag rule of this sort would be unconstitutional if applied to Americans.”

When health clinics providing comprehensive care are forced to close, experts say, whole communities—not just pregnant women—are affected. Human Rights Watch reports that the policy now affects funding to programs addressing the prevention and treatment of tuberculosis and malaria, and even to water, sanitation, and hygiene initiatives. In particular, efforts to stem HIV infection have been severely impacted. The Center for Health and Gender Equity last year reported that in Gaza Province, Mozambique, where almost a quarter of the population is HIV-positive, the number of people tested for the virus after losing funding dropped from nearly 6,000 to fewer than 700 over a three-month period. NGO workers in the province also said they feared that girls as young as 12 who become pregnant would likely never return to school.

In Washington, DC, the president’s expansion has inspired a push to repeal the global gag rule for good. In January 2017, Rep. Nita Lowey (D-N.Y.) was joined by 128 legislators in cosponsoring the Global Health, Empowerment and Rights (HER) Act, a bill that would remove abortion-related restrictions on recipients of global health aid. The bill was also introduced in the Senate by Sen. Jeanne Shaheen (D-N.H.) and had 46 bipartisan co-sponsors.

Supporters of the new bill note that the gag rule reaches beyond US law when it bans providers from educating their patients on abortion care. “There’s no question that a global gag rule of this sort would be unconstitutional if applied to Americans,” said Brian Dixon, senior vice president of the Population Connection Action Fund, a reproductive health advocacy group. “You can’t condition receipt of a government benefit on sacrificing your rights to free speech.” The Global HER Act, he said, would make it impossible for another president to unilaterally impose the policy and would ensure that foreign health care providers could plan for the future.

Even if funding was reinstated, the wider ramifications of the policy may endure. In a report released in January, Planned Parenthood warned that the expanded global gag rule may also have helped stall national movements toward a more liberal abortion policy. In Mozambique, abortion was decriminalized in 2014 after more than a decade of debate, but even in areas where health providers were aware of the new law, more than half told researchers that they would not be willing to provide an abortion. Planned Parenthood’s local partner organizations indicated that this was likely due to fear of losing funding from the United States.

But for health care providers on the ground, the impact of the Trump administration’s expansion is an immediate reality. In Kenya, Ouyo said another FHOK clinic is in danger of closing soon. If it does, residents of Kibera, Kenya’s largest slum community, will be left without potentially lifesaving services. “It’s extremely important that this policy be repealed,” she said. “Women will die as a result of this. It’s about human life.”