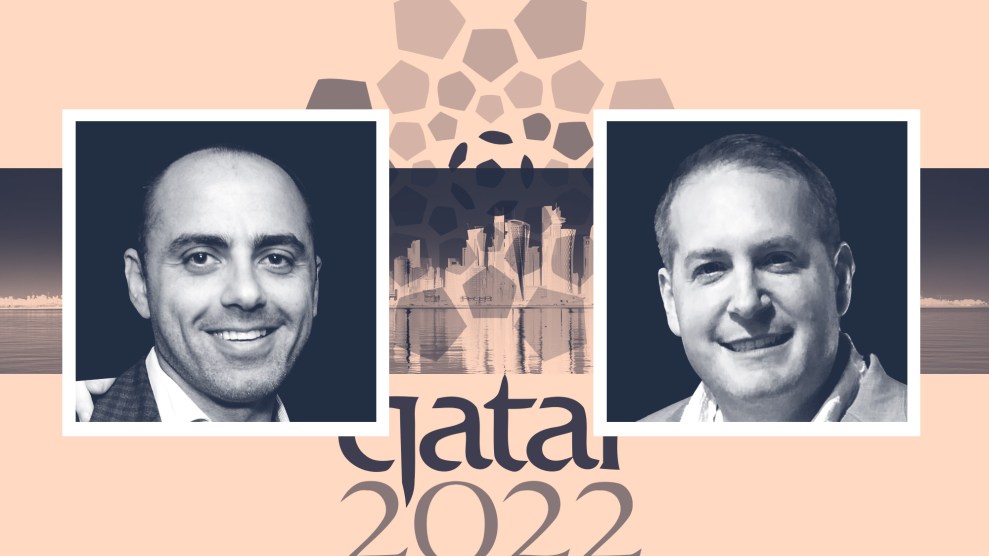 Two lobbyists known for helping Qatar curry favor among allies of President Donald Trump received nearly $4 million from a mysterious PR firm that appears to be tied to the Qatari government—another indication that a shadow war in the Middle East has taken root in the DC swamp with little oversight.

Nick Muzin and Joey Allaham have previously attracted attention for their unconventional lobbying in the United States for Qatar. This work involved courting 250 people they believed could influence Trump’s view of the small Gulf state and earned them more than $3 million. But filings submitted to the federal government reveal that Stonington Strategies, a firm Muzin runs, received another $3.9 million in payments in the fall of 2017 for work related to Qatar. Muzin, a former top aide to Sen. Ted Cruz (R-Texas), reported paying $2.3 million of that sum to a consulting company set up by Allaham, who once owned several high-end kosher restaurants in New York City.

These recently revealed payments highlight the unusual and lucrative work that Muzin and Allaham did for Qatar, a natural-gas-rich state that has eagerly sought help from plugged-in lobbyists, as the Qatari government has engaged in a fierce competition for influence in Washington against a coalition of its regional neighbors. (The leading members of that coalition, Saudi Arabia and the United Arab Emirates, have enlisted an army of their own lobbyists.)

In two submissions to the Justice Department—required by the Foreign Agents Registration Act—Muzin declares that the $3.9 million in payments came from Blue Fort Public Relations LLC, a firm that claims on its website to have offices in Doha, the Qatari capital, as well as London and Washington. The filing says that over the course of the contract with Blue Fort, the lobbyists “arranged senior level introductions, arranged trips, and fostered dialogue between American and Qatari companies and their executives.” It notes that the assignment also involved helping Qatari investors find business opportunities and lists 15 US executives contacted as part of the project, including Steve Witkoff, a billionaire real estate developer and Trump backer, and Philip Rosen, co-head of the real estate practice at powerhouse law firm Weil, Gotshal & Manges.

The filings were submitted more than a year after they say the work had started. Justice Department rules require foreign lobbying to be reported within 10 days of signing a contract or performing work.

Blue Fort appears to have acted as a conduit for lobbying payments. But it is hard to pin where the money originated. On its bare-bones website, Blue Fort Public Relations does not list any of its officers, owners, clients, or employees. An inquiry sent to an email address on the website went unanswered. The London and Doha office addresses listed on Blue Fort’s website appear to be shared workspace locations.

The firm’s website does suggest it is affiliated with Spark Digital, an advertising company that shares the same office address in Doha. Nino Kader, Spark Digital’s CEO, indicated in a message that he also runs Blue Fort. But Kader denied that the firm made any payments to Muzin and Allaham. “You must be mistaken,” Kader told Mother Jones when asked if his firm had sent payments to Muzin or Stonington Strategies. “We don’t pay Muzin or his firm.” When Mother Jones shared forms with him indicating that Blue Fort paid Muzin’s firm $3.9 million—which included a contract between Blue Fort and Stonington Strategies—Kader replied, “Looking into this…” He did not respond to further questions.

Muzin and Allaham declined to answer questions. But there is no reason for Muzin to register under the Foreign Agents Registration Act unless he believed the Qatari government could be considered a beneficiary of his lobbying work. An American investor, who asked not to be named and who is among those cited by the lobbyist, said Muzin and Allaham connected him to the Qatar Investment Authority, a state-run wealth fund.

One of the forms Muzin filed states, “To the best of Stonington’s knowledge, Blue Fort is a private firm that is incorporated in Qatar with offices in London, UK and Washington, DC.”

Spark Digital says on its LinkedIn page that it “was created by the team that brought you the Qatar 2022 World Cup bid website and social media campaign.” The firm’s website was registered in 2011 by Ahmad Nimeh, a Qatari who played a key role in the country’s bid to host the 2022 World Cup. Qatar’s successful World Cup bid prompted charges that its representatives had bribed officials and engaged in dirty tricks to hurt competing bids.

In July, the British Sunday Times reported that a top official in the New York office of an international PR firm, Brown Lloyd James, sent an email to Nimeh in 2010 that reported that Brown Lloyd James had “undertaken an extensive campaign to undermine the 2018/2022 candidacies of competitor countries.” A whistleblower told the Times that so-called “black ops” were mounted “to undermine the public support in the United States and Australia first and foremost, and the UK” and were funded by Qatar. When Nimeh registered Spark Digital, he listed the same Washington address where Brown Lloyd James had an office. In an email, Nimeh told Mother Jones he was not “involved with any PR efforts” with Muzin and Allaham. He did not respond when asked why he had registered Spark Digital’s website.

The Qatari Supreme Committee for Delivery and Legacy, which oversees the planning and infrastructure of the 2022 FIFA World Cup, has said it “rejects each and every allegation put forward by The Sunday Times.” Brown Lloyd James did not respond to inquiries.

Muzin, an Orthodox Jew with legal and medical degrees, worked for Trump’s campaign after Cruz’s presidential bid failed. But rather than seek a White House job, he joined a K Street gold rush, becoming one of a number of Republican operatives who tapped their conservative connections to win multimillion-dollar contracts for lobbying work. Muzin partnered with Allaham, a Syrian-born Jew who touts personal connections to an array of luminaries, including Syrian President Bashar al-Assad, the Trump-boosting attorney Alan Dershowitz, and former Trump adviser Steve Bannon.

Since becoming foreign lobbyists, Muzin and Allaham have raked in big fees but have also encountered some controversy. Last year, Muzin registered as a lobbyist for the conservative Democratic Party of Albania, an opposition party to the ruling Socialist Party, with Allaham on board as a consultant. The party paid a modest $25,000 per month, but Muzin reported that he had also been paid $500,000 to lobby for the Albanian party by another entity: a mysterious Scottish shell company called Binatta Trade LP. As Mother Jones reported in March, Binatta Trade had a complicated corporate structure but appeared to be controlled by Russian nationals.

In July, Muzin and Allaham announced they were launching a lobbying firm with a surprising partner: former Trump national security adviser Michael Flynn. Flynn’s involvement was striking because he was also working as a cooperating witness for special counsel Robert Mueller, after pleading guilty to lying to the FBI about his contacts with Russia. Flynn also admitted in his plea that he lied to the Justice Department to hide his secret work as a lobbyist for Turkey. Flynn backed out of the planned venture with Muzin and Allaham on the same day that they announced it.

In March, Elliott Broidy, a former top Republican fundraiser and prominent critic of Qatar, sued Muzin, Qatar, and others, alleging that, due to his public attacks on Qatar, which he accused of funding terrorism, they had conspired to steal and distribute his emails, which revealed embarrassing details about his personal and professional life. All the defendants denied Broidy’s allegations. A judge threw out the charges against Muzin and other defendants on jurisdictional grounds in August.

In June, Muzin and Allaham announced they had ceased working for Qatar. But they have now reported around $7 million combined for their lobbying on behalf of Qatari interests. And they had hoped for more. During a deposition taken during Broidy’s suit, Allaham claimed that he and Muzin considered filing a lawsuit to recover “five to ten million” dollars more that they believed the Qataris pledged to pay them. Allaham also said during the deposition that he considered opening an offshore account in Nevis to receive payments. But he said that he eventually decided “it is a hassle,” adding, “If the Qataris want to pay me, they should pay me in the United States.”

It is not clear what the Qataris would have paid such a large sum for, or why they allegedly reneged. What is clear is that due to weaknesses of the Foreign Agents and Registration Act, the public cannot always see who really pays lobbyists for foreign interests.