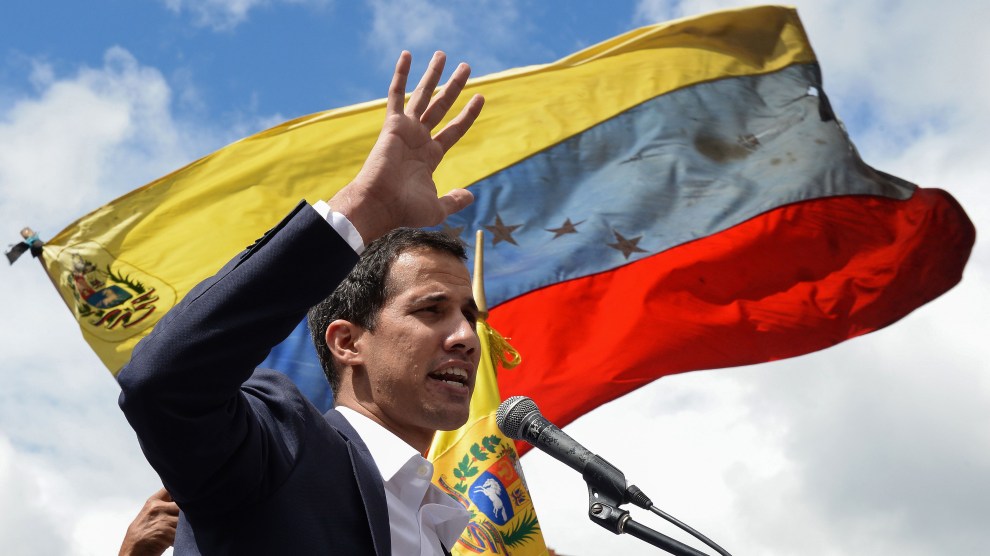 Thousands of protesters took to the streets of Venezuela’s capital, Caracas, on Wednesday to demand that the country’s longtime president, Nicolás Maduro, step down. They were led by Juan Guaidó, a previously little-known politician who has reenergized the Venezuelan opposition by challenging Maduro’s rule as unconstitutional. The protests come after four years of economic collapse and massive inflation, during which millions have fled the country. Those who remain face widespread hunger and shortages of medicine and other necessities.

Despite deteriorating conditions, the dictator was granted a second six-year term when he was reelected in a widely disputed election in May. Now, opposition leader Guaidó is leading the anti-Maduro movement, claiming that the election was rigged. As head of the National Assembly, the country’s legislative body, Guaidó has asserted that without a legitimate leader, the constitution puts him in charge of the country.

On Wednesday, President Donald Trump recognized Guaidó as the country’s rightful head of state. He was quickly joined by other countries including Canada, the United Kingdom, Argentina, Brazil, Colombia, and Panama. Meanwhile, Russia, China, Turkey, and Syria issued strong statements in support of Maduro. When asked whether a military intervention by the US was being considered, Trump said, “We’re not considering anything, but all options on the table.” In response, Russian President Vladimir Putin warned against “destructive interference” in Venezuela, calling it “a catastrophic scenario.”

“It raises the stakes,” said Dr. Jennifer McCoy, a political science professor at Georgia State University and co-author of International Mediation in Venezuela. “At this point, with two people claiming to be president—one side with the military and the other with the people—it’s a very fragile and volatile situation.”

We spoke to McCoy to find out what might be next for Venezuela.

Mother Jones: Why are we seeing these protests?

Jennifer McCoy: This young politician, Juan Guaidó, has burst on the scene. He was just elected in Venezuela’s National Assembly, and he’s there by chance because the more senior members of his party are all in exile or under house arrest. Nobody had heard of him before. He’s a great speaker, and he’s really inspired people. Until Wednesday, he had been being very prudent, saying he was prepared to become interim president of Venezuela if he had the support of the people and of the military. But he had not asserted that he was the interim president.

But on Wednesday, as these big marches were happening, Guaidó surprised even some of his own coalition members by being sworn in as interim president of Venezuela, at the same time as the United States and other countries recognized him as interim president. So now, there’s a huge constitutional and political crisis in Venezuela. Where will the military go, between Maduro and Guaidó? Where will the people go? What will happen next?

“So now there’s a huge constitutional and political crisis in Venezuela. Where will the military go, between Maduro and Guaidó? Where will the people go? What will happen next?”

MJ: How long has this been building?

JM: I think it’s really been building since Hugo Chávez died in 2013. Nicolás Maduro was elected to replace him in a special election, which was very, very close. The opposition protested and said it wasn’t a fair and free election. But he maintained power.

Since then, the economy has gone into a free fall. The opposition has always refused to legitimize his rule, and there have been various cycles of big protests and arrests. The last major protest cycle was in 2017, and many people were arrested. There were over 100 deaths. But it didn’t result in any change in the government, so people became very demoralized. It’s only been in the last two weeks that this new wave of energy has really sprung up, thanks to Maduro’s inauguration on January 10 and Guaidó’s election.

MJ: What kind of relationship does the United States have with Venezuela’s current regime?

JM: The United States has had a tense relationship with Venezuela for many, many years, since Hugo Chávez became president in 1999. [Former President Barack] Obama imposed some sanctions on individual leaders, and Trump has continued and expanded them and also put more severe financial sanctions on the country.

Now Trump has been talking about sanctions on Venezuela’s oil exports to the United States. That would be a very serious move, because oil is the main source of income for Venezuela. The United States had not done it before because it didn’t want to hurt the Venezuelan people, who would suffer if that government revenue was shut off. But the people have been suffering so much in recent years, because of hyperinflation and shortages of food and medicine—so while the sanctions would be devastating, their lives are in such misery already that it wouldn’t be the first cause.

MJ: Why is the current administration interested in Venezuela?

JM: This administration has taken Venezuela on as one of its causes, I think primarily pushed by Sen. Marco Rubio. It’s important for the United States in policy terms. Venezuela is beginning to destabilize the entire region because of its massive immigration and refugee flow to its neighboring countries. Three million people have left in recent years. So that’s of concern to the United States.

MJ: Do you have a sense of what it feels like on the streets right now?

JM: I’ve been in contact with Venezuelans who are there, and there’s just so much uncertainty. They’re trying to figure out what’s happening. There are so many mixed messages coming over social media and the news. Looking at the bigger picture, many of us were hoping that we would see some kind of negotiations towards a transition. In 1958, there were negotiations over several months between the political parties and different factions of the military who realized that the dictator in office at that time needed to go. They negotiated behind the scenes and pressed the dictator, Marcos Pérez Jiménez, to finally leave the country.

MJ: Maduro has just announced he is breaking diplomatic ties with the United States, and ordered American diplomats to leave the country within 72 hours. The Trump administration is defying that order. What does that mean?

JM: Maduro’s expulsion of all US diplomats, and the Trump administration ignoring that order, raises stakes even higher. Guaidó invited the United States and other countries to keep their diplomatic personnel in the country. If Maduro tries to use force to remove them, that opens the possibility of US military force to protect them. It would be a high-risk gamble for Maduro. On the other hand, if Maduro and military do try to hold the diplomats hostage in some way and Trump is forced to respond, it’s a high-risk strategy for the United States to contemplate military action as well.

MJ: Is this the end of Maduro?

JM: There have certainly been times in the past when people thought Maduro would have to resign or the people would have to remove him. The question was how anyone could continue to support this situation, with a completely failing state and its own people in misery. But he’s survived up until this point. His inner circle’s survival is dependent on this government’s survival. They fear their own imprisonment or extradition to the United States if it falls. While there’s definitely momentum now, and the people opposed to him are feeling hopeful again, I hesitate to say, definitively, that it will be.

MJ: What happens next?

JM: Right now it’s a fragile situation, and it could potentially erupt into violence. The government could try to arrest Guaidó, which would probably bring more people out into the street and could cause more repression, more violence. We’re waiting to see what the government does. Will they react like they’re in a corner and lash out, as they have in the past, with repression? Will the military go along? Because the troops themselves and their families have been suffering from hunger as well. The National Assembly has passed a law giving amnesty to people in the military and security forces if they join a new transitional government. It’s important, because many in the military have been accused of human rights abuses, and it could entice some of them to leave. But we did see some violence and some repression from the security forces on Wednesday, so at least some of them have continued to carry out government orders.