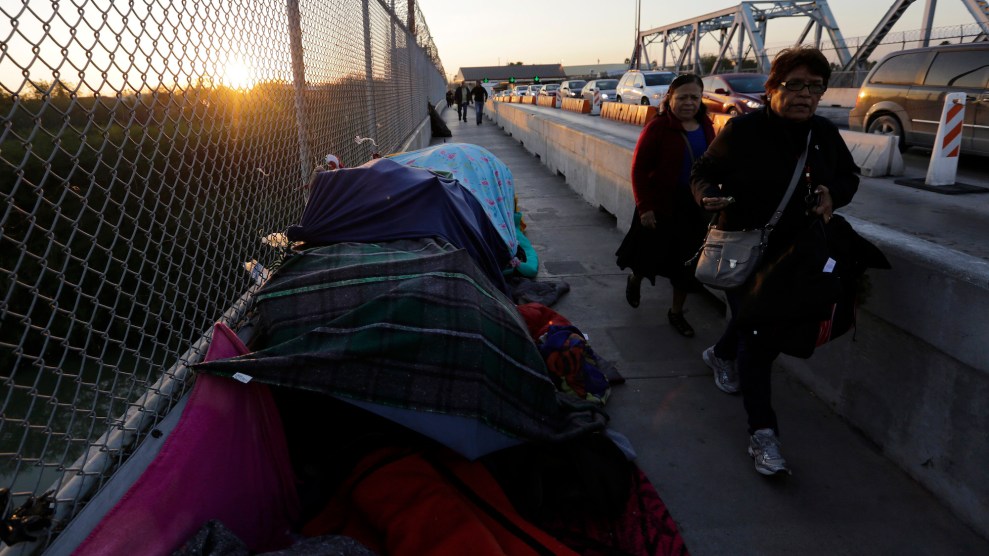 The Trump administration is set to begin its latest crackdown on asylum-seekers, forcing some of them to wait in Mexico instead of letting them make their cases for protection from within the United States. The policy will require people fleeing persecution to wait in violent border cities for months and potentially years.

It could end up being the Trump administration’s most effective effort to deter asylum-seekers after a series of moves that have accomplished little. The dangerous waits in Mexico could discourage many people from making the journey north, given that only a small share of Central Americans seeking asylum receive it. The policy is being implemented as record numbers of Central American families come to the United States.

The administration planned to start sending asylum-seekers coming through Tijuana back to Mexico on Friday, but according to Al Otro Lado, a Tijuana legal services organization, that didn’t happen. Still, the returns could start any day, and as with so many of the Trump administration’s immigration crackdowns, the new policy raises a basic question: Is it legal?

Mother Jones spoke with Stephen Legomsky, who served as the Obama administration’s chief counsel for US Citizenship and Immigration Services, the agency responsible for legal immigration. Legomsky is an emeritus law professor at Washington University in St. Louis and the co-author of an immigration and refugee policy casebook that has been used by more than 180 law schools. He also served as an immigration adviser to the George H.W. Bush administration.

Mother Jones: What is the Trump administration’s legal justification for sending asylum-seekers back to Mexico?

Stephen Legomsky: Their legal argument is that a provision in the Immigration and Nationality Act allows the government to return certain foreign nationals to Mexico or Canada while they’re waiting for their removal proceedings. But the statute is so convoluted that you would think it had been written by either an evil genius or a practical joker.

The same provision that allows the government to return certain foreign nationals creates a specific exception for people who arrive without valid US entry documents, typically because those individuals are applying for asylum. In my opinion, there is no legal authority to force these latter individuals—this would be mainly Central American refugees—to remain outside the country while they await their hearings.

MJ: You told HuffPost in November that if a student in your class wrote that statute, he or she would get an F. Why?

MJ: How are asylum-seekers normally received when they reach the border?

SL: Normally when you arrive at the border and you apply for asylum, the law gives you a screening interview to determine whether you have a “credible fear” of persecution. If a credible fear is found, then you’re scheduled for a full hearing before an immigration judge.

MJ: Remain in Mexico will be challenged in court. What are the odds that it will be temporarily or permanently blocked?

SL: I think it’s highly probable that the lower courts will have little trouble issuing temporary injunctions. The Supreme Court is always a big question mark. Now, with five very conservative judges, it’s hard to predict. My guess is that this could turn on the vote of Chief Justice [John] Roberts, and that’s hard to know in advance.

MJ: What are the humanitarian concerns raised by forcing asylum-seekers to wait in Mexico?

SL: I think safety is far and away the most important concern. The border area is an extremely dangerous place, especially for refugees who are traumatized and highly vulnerable, particularly mothers and children. They are at risk of kidnapping or extortion at the hands of drug cartels, gangs, and common criminals. Just a few weeks ago, two children were murdered in the border area [in Tijuana].

I think the policy makes it nearly impossible for refugees to access any legal assistance. That’s critical, because studies consistently show that asylum-seekers who don’t have counsel face overwhelming odds against succeeding. In order to succeed with an asylum claim, you need meticulous documentation. You also have to be able to articulate—in [a] legally precise form—the basis for your asylum claim. Without counsel, that’s extremely hard to do.

They changed the name from [Remain in] Mexico to the Migrant Protection Protocols. I think changing that name to migrant protection would have made Orwell blush.

ML: What can be done to improve the asylum system?

SL: There are long-term solutions and short-term [ones]. One essential element of any long-term solution is a serious assistance plan and trying to help Central American source countries fight root causes of flight to the United States, which include endemic violence, poverty, and probably government corruption. That would not solve the problem overnight. My view is that until the problem is solved, the administration simply needs to obey US and international law and reinstate the orderly asylum process that has served us well for decades.

The bottom line for me is that the United States has no obligation to grant asylum to every individual who requests it. But we do have a legal obligation, and in my view a moral obligation, to give each person a fair chance to present his or her claim and be heard before we deliver the person back into the hands of those who will harm them.