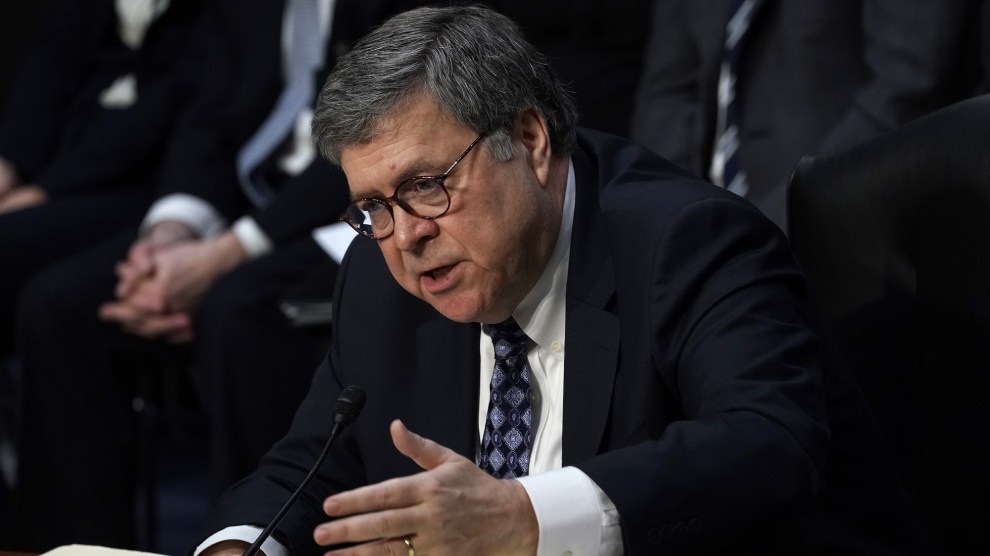 Based on Tuesday’s testimony by William Barr, Donald Trump’s attorney general pick, the president may already regret the nomination.

Trump has spent nearly two years raging against the Justice Department for allowing special counsel Robert Mueller to investigate the Trump campaign’s ties to Russia. But Barr said in testimony before the Senate Judiciary Committee that he will protect Mueller’s investigation from political interference. “On my watch, Bob will be allowed to finish his work,” he said.

Barr, 68, who served as attorney general under former President George H.W. Bush, said his age and experience puts him “in a position to be independent” and “do the right thing and not really care about the consequences.” Barr proclaimed that he won’t “be bullied into doing anything wrong” by Trump or anyone else and asserted that he gave Trump “no assurances, promises, or commitments of any kind” about what he would do as head of the DOJ.

Trump has suggested that the attorney general should represent him legally and “protect” him from investigation. Barr said Tuesday that the attorney general is not the president’s lawyer. Trump repeatedly decried former Attorney General Jeff Sessions’ decision to recuse himself from the department’s investigation into Russian interference. Barr testified that Sessions “did the right thing recusing himself.” Trump calls the Russia probe a witch hunt. “I don’t believe Mr. Mueller would be involved in a witch hunt,” Barr said.

Trump has demanded an end or quick conclusion to Mueller’s probe, a demand some congressional Republicans have echoed. Barr testified that he will not interfere with Mueller’s investigation and will give the special counsel the time and resources to do his job.

Trump has claimed that Mueller has conflicts of interest that should disqualify him from the Russia probe, asserting, among other things, that Mueller and former FBI Director James Comey, who Trump fired, are “best friends.” That claim is false according to Comey, who says he is not close personally with Mueller. Who is close with Mueller? Barr, who called Mueller’s family his “good friends” and said they will remain so after Mueller’s probe ends.

When asked Tuesday to pledge not to fire Mueller without cause, Barr not only did so, but said it is “unimaginable to me” that Mueller would do anything that warrants dismissal.

So why would Trump nominate Barr as his attorney general? For one thing, Barr’s promises may be less ironclad than they appear. Barr’s written testimony included the qualification that his power to block Trump’s whims are limited. “Where judgments are to be made by me, I will make those judgments based solely on the law and will let no personal, political, or other improper interests influence my decision,” he wrote.

This is significant because Barr has previously advocated an expansive view of executive authority, suggesting he might deem the president as exercising decision-making power over many DOJ issues. Barr’s broad view of executive power was on display in the unsolicited memo he sent to Deputy Attorney General Rod Rosenstein last year that criticized Mueller’s investigation into whether Trump obstructed justice.

Democrats said the 18-page memo appeared to be a way for Barr to audition for the attorney general nomination—a claim Barr denied on Tuesday, arguing he would not have sent a lengthy memo to the DOJ, rather than to the White House, if he were seeking Trump’s attention. But Barr in fact said in a letter to Judiciary Committee Chairman Lindsey Graham (R-S.C.) that he also sent copies of his memo to White House special counsel Emmet Flood; White House counsel Pat Cipollonel; Trump lawyers Jay Sekulow and Marty and Jane Raskin; and attorney Abbe Lowell, who represents Trump’s son-in-law Jared Kushner. Whatever Barr intended, it seems likely that Trump selected him based partly on the views outlined in his memo.

Barr also testified Tuesday that he met personally with Trump in June 2017 to discuss working as one of Trump’s lawyers. Barr didn’t detail what legal advice he may have offered, but he said he told Trump he didn’t want the job. It’s possible Trump got a different impression.