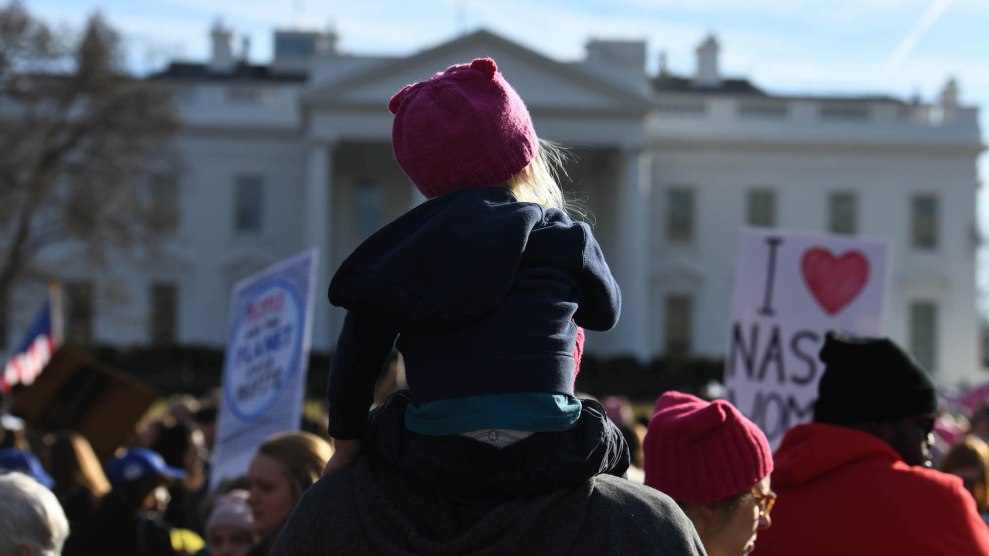 In January 2017, over 3 million women descended on Washington, DC (and millions of others in more than 600 cities around the world) to march for women’s rights and protest the inauguration of President Donald Trump.

But despite that broad turnout, the movement has been under scrutiny for not creating an inclusive environment; the first march was criticized as a “display of white privilege” that excluded trans and non-binary women. Leading up to its third year, it’s the very leadership that was originally brought on at the national organization before the first march to fix diversity issues that has put the group under fire.

The controversy took new prominence in March, when it was revealed that Tamika Mallory, one of four co-leaders of National Women’s March, was present at a speech where Nation of Islam minister Louis Farrakhan made anti-Semitic remarks, calling Jews “satanic.” It wasn’t the first time Mallory had publicly associated herself with Farrakhan. In May 2017, just months after the first Women’s March, Mallory posted on Instagram calling Farrakhan “the GOAT” (greatest of all time) and writing “Thank God this man is still alive and doing well.”

After Mallory’s attendance at the speech was revealed, the Women’s March issued an statement claiming that “Minister Farrakhan’s statements about Jewish, queer, and trans people are not aligned with the Women’s March’s unity principles.”

But the bad press for the group continued. In November, one of National Women’s March’s original founders, Teresa Shook, came out against the group’s current leadership. “I have waited, hoping they would right the ship. But they have not. In opposition to our Unity Principles, they have allowed anti-Semitism, anti-LBGTQIA sentiment and hateful, racist rhetoric to become a part of the platform by their refusal to separate themselves from groups that espouse these racist, hateful beliefs,” she wrote in a Facebook post. “I call for the current Co-Chairs to step down and to let others lead who can restore faith in the Movement and its original intent. I stand in Solidarity with all the Sister March Organizations, to bring the Movement back to its authentic purpose.”

A day later, on November 20, Linda Sarsour, a national co-chair, released an apology on behalf of the organization. “It’s become clear, amidst this media storm, that our values and our message have—too often—been lost,” she wrote. “That loss caused a lot of harm, and a lot pain. We should have been faster and clearer in helping people understand our values and our commitment to fighting anti-semitism. We regret that.”

In December, Tablet published a scathing feature detailing more internal leadership drama, including claims that anti-Semitic statements had been made in private meetings as early as 2016. The article included criticism from a number of former organizers who expressed disappointment with leadership. It also called into question the group’s finances and pointed out that at least six regional groups had disaffiliated themselves from the national group. In cities like New York, where an unaffiliated women’s march collective exists independent of the national organization, accusations of anti-Semitism have widened the schism. (Dozens of local women’s march organizations sprung up in late 2016, several of which have been enmired in trademark disagreements with the national outfit.)

The very leadership that was brought on to fix diversity issues has put the group under fire.

A number of prominent organizations including the NAACP, Emily’s List, NARAL Pro-Choice America, the National Abortion Federation, and the AFL-CIO partnered with the Women’s March in past years but have dropped out in 2019. With the exception of Kirsten Gillibrand, who plans to attend a march in Iowa, 2020 Democratic contenders will also be conspicuously absent this year.

Leading up to Saturday, leaders of the march have continued to battle claims of anti-Semitism. This week, the Women’s March announced the launch of a 33-member steering committee, which includes three Jewish women. In a Monday appearance on ABC’s The View, Mallory distanced herself from Farrakhan’s comments but stood by her past praise of the Nation of Islam leader. “I didn’t call him the greatest of all time because of his rhetoric,” Mallory told host Sunny Hostin. “I called him the greatest of all time because of what he’s done in black communities.” The next day, Mallory broadly condemned anti-Semitism in an appearance on radio show The Breakfast Club, calling it a “real, serious problem.”

“It’s one that black folks particularly need to pay attention to, because there are forces that want to use anti-black racism and anti-Semitism and racism in the Jewish and black communities to keep us apart,” she said. “The same white nationalism that Donald Trump stands for is the same white nationalism that aims to oppress both Jews and black people.”

Still, it’s unclear if the waning interest in the Women’s March is solely driven by recent scandal or is simply a tipping point for a long-embattled movement.

Shanthi Blanchard, a 31-year-old co-founder of a New York City consulting firm for female entrepreneurs, said that while she attended the 2017 Women’s March, she was discouraged by discrimination she saw at the event, including the mocking of Native American protestors. She said she sat out 2018’s demonstration, waiting to see if the organization would address some of its issues. Blanchard added that recent comments suggest to her that the organization still has a lot of work to do.

Blanchard said she believes that the problems with the Women’s March are reflective of a larger conversation women need to have about what it means to create intersectional movements that actively discuss issues around race and religion. “I’m hesitant to stand by an organization that I’m not necessarily 100 percent sure where they are in that conversation,” said Blanchard. “I think the real solution is going to come from including more voices in that conversation around race, around religions, and about past grievances.”

Justin Larue, a 43-year-old father from Minneapolis, is set to attend the DC march with his 15-year-old daughter as they have every year. He says that while he is aware of the controversy and is disappointed in Mallory’s comments, he thinks the organization’s new steering committee suggests improvements are coming.

He and his daughter plan to hand out stickers and pins for mental health awareness, an issue she is passionate about.

“It’s just such a gigantic platform,” he tells Mother Jones. “I think they really have to keep the momentum going to 2020. I see this being a yearly venture until he’s out of the office.”