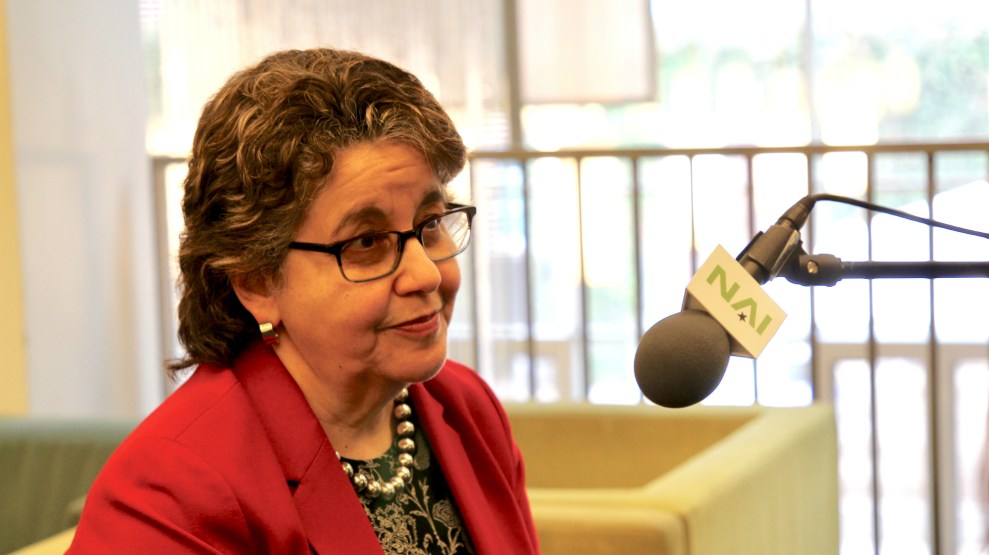 Ellen Weintraub, the sole Democratic commissioner on the Federal Election Commission, just became chair of the agency in January—and she’s already trying to shake things up at her “dysfunctional” agency. The FEC chairmanship, which rotates among the commissioners each year, is mostly a ceremonial role among equal commissioners with minimal power besides the bully pulpit, but Weintraub is coming up with novel solutions to force action at the agency charged with overseeing campaign finance.

Weintraub, who last chaired the agency in 2013, recently announced that she is going to take the drastic step of not allowing FEC lawyers to defend the government when the FEC has been sued for not enforcing the law, effectively an effort to sabotage her own agency. She has become increasingly frustrated by the FEC’s gridlock and lack of enforcement of campaign finance law, which she feels has led to less disclosure, less transparency, and more dark money within the campaign finance system.

The new FEC chief recently sat down with Mother Jones to talk about the potential ways dark money could become a vehicle for foreign influence in elections, the impact of Citizens United and how she plans to respond to it within the FEC, and whether the FEC should be restructured altogether.

Mother Jones: How do you plan to approach your chairmanship?

Ellen Weintraub: The issue of campaign finance and corruption in government is a very hot topic these days. A lot of candidates ran and won on those issues. There’s new legislation in Congress. I think there’s an opportunity for rule-making here if we can get consensus on it, which is, you know, it’s an uphill battle to get a consensus on that [disclosure or transparency] here. But I think there are other ways of drawing attention to these issues by talking to people on the Hill, by speaking out here using the bully pulpit.

MJ: What did you learn from your chairmanship in 2013, and will you employ any different or new strategies this time?

“The issue of campaign finance and corruption in government is a very hot topic these days. A lot of candidates ran and won on those issues.”

EW: So the last time I was chair, Don McGahn was the vice chair, and we had a fairly contentious relationship. He wasn’t really interested in working together on much of anything, which I always thought was kind of sad because we had both been private practitioners and I thought there probably were issues that we could have agreed on had there been any interest in having that happen. But it didn’t work very well in 2013.

But I like Matt Petersen [the new Republican vice chair] and I get along with him and I’m hoping that he’s going to be more interested in helping me get the work of the agency done. We’ll see. But as I said, I’m eager to reach out to people on all sides of the issues to try and break through the gridlock, break through the polarization and people’s silo-ing of information. But at the end of the day, if people are not prepared to enforce the law, I think that’s our obligation. And I’m not going to be shy about calling people out on that.

EW: I think the most significant change would be to change the appointment process for commissioners and try and take it out of the hands of the people who are most directly affected by our decisions. It’s not the usual case that an industry that is regulated actually gets to choose their regulators. But that’s what happens in campaign finance. The politicians on the Hill and in the White House get to choose who’s going to sit on the FEC.

And there have been a variety of proposals on how to redo this agency. But one feature that I’ve seen come up in several different proposals, and I believe is also part of the proposal in HR 1, is to try and provide at least some separation between the politicians and that process of choosing who’s going to be on the commission.

We could have a blue-ribbon commission of people who would then recommend potential appointees, potential commissioners, rather than have the politicians themselves hand-select them, and I think that would be really useful.

MJ: So what is your take on the current state of campaign finance and where it’s headed?

EW: The court has been pretty bold and consistent on this topic of the benefits of a vigorous disclosure. Yet any time you try and expand disclosure to cover the dark-money loopholes, somebody’s out there saying, “Oh no, you’d be violating somebody’s First Amendment rights.”

When somebody’s spending millions of dollars to try and influence your vote, I think you’ve got a right to know about it. I think they sacrifice a little bit of their privacy interests when they want to spend that much money to try and get their way on public matters.

In terms of resolving this tension, for the longest time I have felt that there is a deal to be had out there on campaign finance legislation. There ought to be a deal out there where you say, okay, maybe we’ll raise some disclosure, will raise some contribution limits, or will either raise or even eliminate the party-coordinated spending limits in return for enhanced disclosure of big donors. You know, not $25 donors, but $10,000 donors, $50,000, donors, million-dollar donors. There ought to be a deal that could be struck in Congress where spending limits are raised to appease the Republicans but also have greater disclosure to please the Democrats.

MJ: What about protecting the rights of the minority of people who interpret the First Amendment as the ability to spend unlimited amounts of money to influence politics?

EW: Well, what is the minority that we’re protecting here? Billionaires. I mean, seriously, I don’t think the current system is protecting and ensuring that “minority” points of view are getting across. The First Amendment, if you go back decades ago, it used to be the jurisprudence used to be designed to protect unpopular viewpoints to make sure that people who had no political power still had the opportunity to get their point of view across. But now it’s been twisted to the point where it seems to be predominantly protecting the most powerful segments of society.

If you look at income inequality in this country, it’s not unrelated to the way our campaigns are being financed, and these trends were exacerbated after Citizens United, because of the creation of these super-PACs—where people can plow millions and millions of dollars into these super-PACs which try to influence key elections. This has really had, in my view, a very deleterious impact on the way our elections are financed and in how debate has developed in this country.

MJ: Has there been any change regarding Citizens United at the FEC? What are your thoughts on it now?

EW: The problem is that the last time the commission wrote its coordination rules was before Citizens United, and we didn’t have super-PACs. The rules that we have on the books now are not sufficient to withstand the weight of all this extra spending by these outside spending groups. We are operating in an entirely different universe than we used to, and we still have not rewritten the coordination rules since Citizens United in 2010. It’s just mind-blowing.

MJ: Do you feel like, strategically, there are any novel or unique ways of trying to actually write those rules now on Citizens United?

You know, there’s been so much information that has come out on the degree to which foreign entities were trying to influence our elections. It is no longer an academic topic. It’s not hypothetical. It’s happening.

It happened in 2016. It continues to happen, and it’s probably going to happen in 2020 if we don’t enact some stronger laws to prevent it. So I think that there is much heightened attention to this issue, which creates, perhaps, an opportunity.

MJ: You said back in 2011 that “the notion that we are a fierce investigative agency that people are quaking in their boots about is probably not the case” and that “back in ’06 and ’07, they said we were feckless and toothless. I’m not sure what the adjective would be today.” What would be the adjective today?