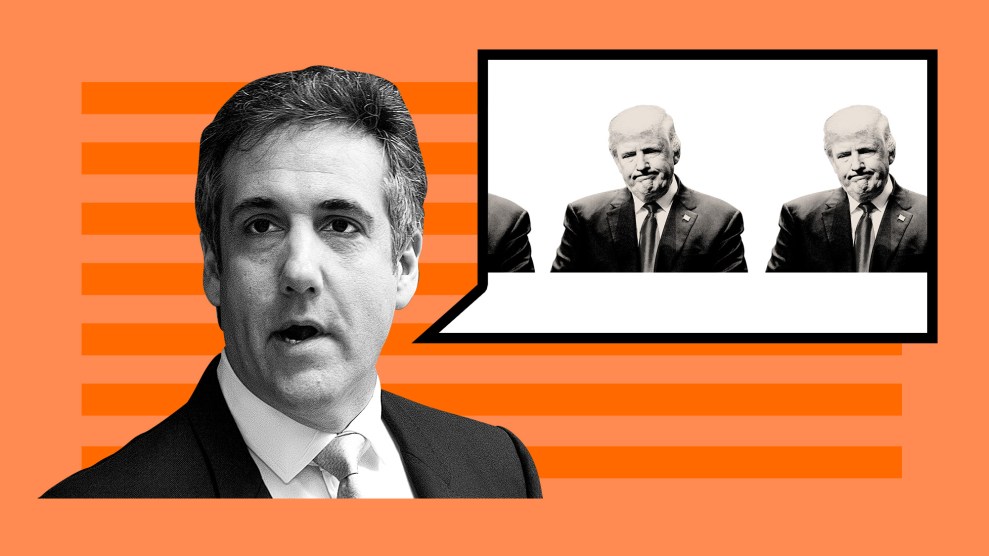 Perhaps the most significant—and overlooked—aspect of the Trump-Russia scandal is that Donald Trump and his crew aided and abetted the Russian attack on the 2016 election by repeatedly denying or downplaying the clandestine Russian intervention aimed at assisting the president. Put aside the issue of direct collusion—say, Trump huddling with Russian President Vladimir Putin to figure out what Democratic emails to hack—the public record already establishes that Trump and his gang are guilty of echoing and reinforcing the Kremlin’s we-didn’t-do-it disinformation efforts, even after they had information indicating Moscow was covertly intervening. In that way, Trump helped Putin’s covert assault—an act of brazen information warfare—against the United States. And Michael Cohen’s historic and dramatic congressional testimony on Wednesday yielded new leads in this regard.

It’s already been demonstrated that Trump and his lieutenants possessed private knowledge that the Kremlin wanted to secretly assist the Trump effort during the campaign. In early June 2016, Donald Trump Jr., Paul Manafort, and Jared Kushner—Trump’s top three campaign advisers—met in Trump Tower with a Russian emissary after being told she would deliver them dirt on Hillary Clinton as part of a Moscow plot to help Trump. Two months later, Trump, then the Republican presidential nominee, received a briefing from the US intelligence community in which he was told US analysts had concluded Moscow was behind the hack-and-dump attacks targeting Democrats. And from mid-June on, there were many media reports noting that cybersecurity experts and US intelligence agencies had fingered Russia as the culprit in the cyber break-in of the Democratic National Committee.

Yet throughout the campaign, the Trump team consistently declared in public that there was no reason to blame the Kremlin. (These denials prompted other Republicans, notably Senate Majority Leader Mitch McConnell and House Speaker Paul Ryan, to say little or nothing about the Russian attack.) Cohen’s testimony offered further reason to believe that Trump knew—or should have known—he was lying when he said Russia was not attacking the US election.

In his prepared statement, Cohen testified that he suspected that Trump was told by Trump Jr. about the June 2016 Trump Tower meeting. His testimony was not a slam dunk. Cohen noted that in the summer of 2017 when news of the Trump Tower meeting emerged, he recalled being in Trump’s office in early June 2016 and seeing Trump Jr. enter the office, walk behind the desk, and say in a low voice to his father, “The meeting is all set.” Cohen told the committee, “I remember Mr. Trump saying, ‘Okay good…let me know.'”

Cohen said he believes this sotto voce conversation between father and son was related to the Trump Tower meeting, but he did not produce any evidence to back up his suspicion. But Cohen did explain, “Mr. Trump had frequently told me and others that his son Don Jr. had the worst judgment of anyone in the world. And also that Don Jr. would never set up any meeting of any significance alone—and certainly not without checking with his father. I also knew that nothing went on in Trump world, especially the campaign, without Mr. Trump’s knowledge and approval.” Cohen’s statement echoed a comment made by Steve Bannon, Trump’s campaign manager and White House strategist, who said there was “zero” chance that Trump did not know about this meeting.

This makes two Trump intimates who maintain Trump was in the know about the Trump Tower meeting.

Cohen also testified that he was in Trump’s office in mid-July 2016 when Trump received a phone call from Roger Stone, Trump’s longtime adviser and a self-proclaimed political dirty trickster. According to Cohen, Trump put Stone on speakerphone, and Stone told Trump that he had just spoken with Julian Assange, the founder of WikiLeaks, and that Assange had said that within days there would be a massive dump of emails that would damage Clinton’s campaign. Trump essentially replied, Cohen recalled, by saying, “Wouldn’t that be great?” Days later, on the eve of the Democratic convention, WikiLeaks did make public over 20,000 emails stolen from the Democratic National Committee.

Cohen testified that he did not remember Stone and Trump discussing the origins of these emails. But weeks earlier, it had been reported that Russian hackers had penetrated the servers of the DNC. So it would not have been farfetched for Stone or Trump to assume the coming email dump was related to the Russian operation. And this testimony raises the possibility that Trump and/or Stone were in a position to obtain information about the WikiLeaks end of the Russian hack-and-dump attack. It is not proof of a connection between the Trump crowd and WikiLeaks. But when asked whether his claim that Stone and Trump discussed the WikiLeaks dump in advance could be corroborated, Cohen remarked, “I suspect that the special counsel’s office and other government agencies have the information that you’re seeking.”

So far, special counsel Robert Mueller has not disclosed any evidence that Stone, who’s been indicted for lying to Congress, was in direct contact with WikiLeaks. But Cohen’s comments deserve further congressional scrutiny that derives answers for the public. It’s notable that Trump, according to Cohen’s testimony, never spoke to the FBI or any law enforcement authorities after being told that Stone had an inside line to WikiLeaks.

Cohen told the committee that he had no evidence of direct collusion between Trump and the Russian attack. But he repeatedly characterized Trump as an inveterate liar who would say anything, however false, to serve his interests. And he stated that Trump continuously conveyed the message to Cohen and others around him that they were always to say there was no collusion and that the Trump-Russia investigation was nothing but a “witch hunt.” Cohen’s testimony reinforces the case that Trump lied during the campaign to divert attention from the Russian intervention—an act that benefitted a foreign adversary assaulting the United States. (Cohen also provided a firsthand account that Trump lied to the public about his secret effort to negotiate a deal in Russia, worth hundreds of millions of dollars, while campaigning for president.)

Throughout the hearing, Republican members of the committee, who fixated on discrediting Cohen, showed not a scintilla of concern that during the 2016 campaign Trump misled the public about both the Russian attack and his own private dealing in Russia. And Trump defenders will certainly latch onto Cohen’s assertion that he witnessed no clear evidence of direct collusion. But Cohen, who repeatedly acknowledged he had previously lied to Congress, offered testimony that buttressed a core component of the Trump-Russia scandal: Trump helped Putin’s cover-up. And that’s a crucial part of the story that should not be allowed to get lost.