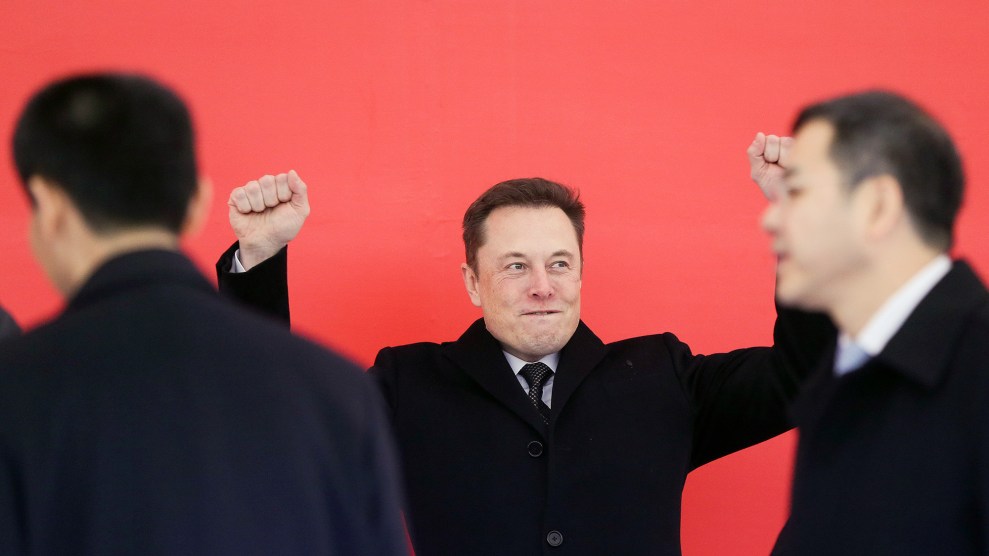 Twitter CEO Jack Dorsey said that he likes “how @elonmusk uses Twitter” during an interview conducted Tuesday on his company’s platform.

Dorsey offered up Telsa CEO Elon Musk in response to a question from tech journalist Kara Swisher on who he considered “the most exciting influential on Twitter right now,” even though Musk has used the platform to incite harassment and spread misinformation—applications that contradict Dorsey’s stated goals for Twitter.

“He’s focused on solving existential problems and sharing his thinking openly. I respect that a lot, and all the ups and downs that come with it,” Dorsey wrote of Musk.

In a sense, Musk may indeed be Twitter’s most exciting user. His open thinking on the platform has opened not just a can of worms for him and his company, but entire barrels of them. He’s likely one of the only CEOs to have triggered a federal investigation of his own company with his own tweets. He’s also likely one of the only high-profile CEOs, if not the only one, who has been sued for defamation over his tweets.

Musk’s tweets haven’t just hurt himself and his businesses. His incessant battling with journalists on the platform has helped incite harassment of female reporters. Dorsey has repeatedly said “improving the health” of conversations and curbing abuse on the platform are key priorities for him. So it’s anyone’s guess as to why he likes, and gave such a prominent endorsement to, Musk’s record. Here are five times Musk’s tweets have gotten him in trouble or done exactly what Dorsey says he doesn’t want people to do on Twitter:

Tesla shares shot up by roughly 10 percent by the end of the day.

Except, according to a subsequent investigation by the Securities and Exchange Commission, Musk had not actually secured funding. The SEC sued him for securities fraud over the tweet, and the two ultimately settled the case for $20 million and his agreement to resign from Tesla’s board for at least three years. The company never went private.

In May 2018, Erin Biba detailed in the Daily Beast what it’s like to be critical of the Tesla CEO on Twitter—and have him respond. That triggered Musk’s fans, who harassed her not just on Twitter, but also went after her via her email and even in the comments of her pictures on Instagram.

Biba also included the accounts of six other women in journalism who have endured similar treatment after criticizing Musk on Twitter.

In her piece, Biba quoted Shannon Stirone, a freelance journalist who covers space. “Sadly there is a pattern to what happens after criticizing Elon. There is a reason I don’t do it very often because I don’t enjoy dealing with the backlash from the army of men who come out to defend him. I’ve gotten replies calling me a ‘stupid bitch’ and names along the same vein. They are so deeply angry and instead of using their words they lash out in the only way they seem to know how, which is to be abusive and demeaning.”

After Biba’s article was published, Musk claimed the story was “incredibly dishonest” and seemed to dismiss that women disproportionately face harassment on Twitter.

Hello, have you met the Internet? Everyone gets harassed regardless of gender, especially if they say false things. Saying I’m against science is like saying Beyoncé doesn’t know beats. Blowback from latter (all genders) would make my comment stream seem like Socratic dialogue.

Musk’s “funding secured” tweet was not the first time he misled investors about the fate of his company.

Tesla Goes Bankrupt
Palo Alto, California, April 1, 2018 — Despite intense efforts to raise money, including a last-ditch mass sale of Easter Eggs, we are sad to report that Tesla has gone completely and totally bankrupt. So bankrupt, you can’t believe it.

On April 1, Musk wrote an outlandish tweet about Tesla going “So bankrupt, you can’t believe it” as an April Fools’ Day joke. Financial experts didn’t find it funny, as the company had recently endured a round of news stories highlighting production and fiscal difficulties. Musk tweeted the joke on a Sunday when markets were closed.

After being particularly frustrated with press coverage of him and Tesla, Musk tweeted that he would create a website to vet and rank news outlets. Musk’s motivations for creating such a site were immediately questioned by members of the media. Musk likened their critiques to logic deployed by tyrants.

The absolute granddaddy of Musk tweets gone awry was when he casually called one of the rescue divers on the team trying to save the group of Malaysian boys trapped in a cave over the summer a pedophile. The tweet has since been deleted.

After being called out on the claim, Musk doubled down.

After being challenged again, Musk defended himself by writing that if he was wrong, then the diver, Vernon Unsworth, would have sued him.

You don’t think it’s strange he hasn’t sued me? He was offered free legal services. And you call yourself @yoda …

Unsworth did end up suing Musk for damages from alleged defamation.

The Tesla CEO initially got frustrated with Unsworth after the diver criticized Musk’s attempts to aid the rescue mission with a specially designed submarine. Some cave rescue experts characterized the plan as misguided and opportunistic.

“He can stick his submarine where it hurts,” Unsworth said in an interview with CNN. “It just had absolutely no chance of working. He had no conception of what the cave passage was like.”