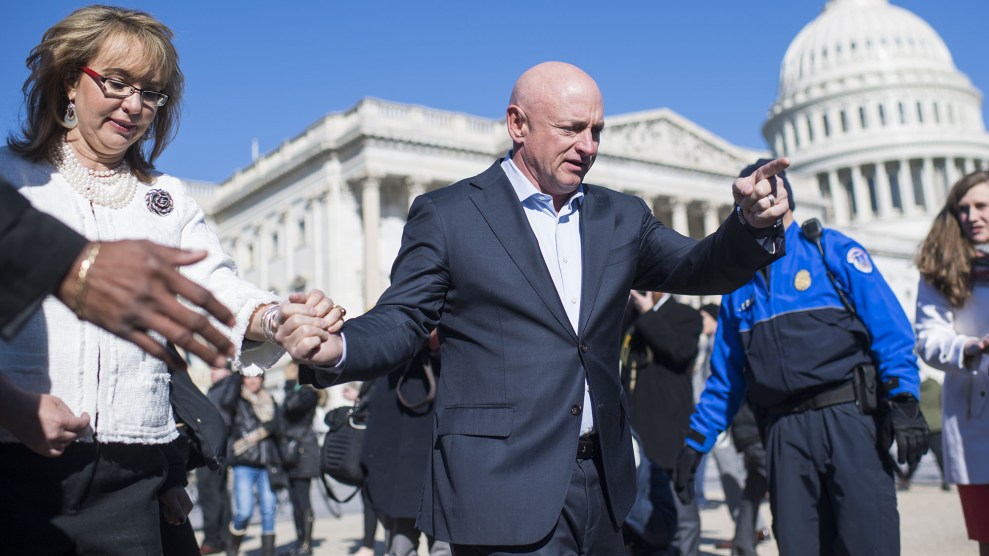 Mark Kelly spent much of the past year on the campaign trail during the midterms, stumping for Democrats who pledged to push for stricter gun laws, a key issue for Kelly and his wife, former Arizona congresswoman and mass shooting survivor Gabby Giffords. The organization they founded together in 2013, now known as Giffords, spent almost $7 million last year to unseat Republicans who sided with the National Rifle Association. Kelly, a former astronaut who took four Space Shuttle trips, made seven stops for veteran Democratic candidates running for Congress who, like Kelly, advocate responsible gun ownership. Nearly every candidate who hosted Kelly and Giffords now occupies the congressional seat or governor’s mansion they sought, and more than three-quarters of US House candidates who received their endorsement won their race.

On Tuesday, Kelly announced he’ll run for Senate in Arizona in 2020 in a special election to replace the late Sen. John McCain. But the politics of guns in Kelly’s home state may not be like the swing districts where Giffords succeeded in the fall. The state Legislature has remained solidly under Republican control for decades, and as a result Arizona has some of the most permissive gun laws in the country. Unlike other states, it hasn’t closed any of the loopholes that exist in the federal background checks, it has no waiting period for firearm sales, and it doesn’t require a license to carry a concealed weapon in public. Giffords’ Law Center, the legal arm of the foundation, gives the state’s gun laws an “F.”

Democratic operatives have long eyed Kelly as a strong contender for Arizona politics given his military, science, and advocacy background. He served as an officer in the Navy during the Gulf War before his career as an astronaut and engineer with NASA. 314 Action, a group that encourages more scientists to run for Congress, had been recruiting Kelly since last month. But since his wife’s shooting, Kelly’s been wholly focused on gun violence prevention, rising to national prominence alongside his wife as they’ve crisscrossed the country supporting stricter gun laws.

Thomas Volgy, a political science professor at the University of Arizona who served as a Democratic mayor of Tucson from 1987 to 1991, says it’ll be hard to predict exactly how Kelly’s gun work will play to a statewide audience. “We haven’t had any kind of referenda to figure out where people stand,” he tells Mother Jones. “No one has really run very clearly on these issues before, at least not in recent times. [Arizona’s newly elected Democratic Sen. Krysten] Sinema didn’t put it at the center of her campaign, and I don’t recall any previous Senate campaigns doing that.” Volgy notes that, like much of the country, Arizona’s vast metropolitan areas and surrounding suburbs have demonstrated a sympathy for gun control measures while more rural areas have not.

“It’s one thing to be an advocate for a cause; it’s another to run for Senate.”

There are signs of a thaw. The Legislature is considering a bipartisan bill that would prohibit those who have been convicted of domestic abuse from owning a firearm, closing a so-called boyfriend loophole that exists in federal law, which only disarms spouses who have such convictions. On the day of Kelly’s announcement, more than 100 volunteers spent the day at the Statehouse in Phoenix lobbying legislators to vote for the measure.

“This is the first time we’ve been able to advocate for something instead of taking the defensive,” says Kara Waite, who has volunteered with Moms Demand Action in Arizona for the last three years.

Jennifer Longdon, a shooting survivor who was just elected to the Arizona Statehouse, agrees. Like Kelly, Longdon is a gun owner, and worked with Kelly through Giffords’ Arizona-based coalition and credits the group’s early endorsement for giving her campaign its “biggest bump” during the primary. “We’re seeing a slight moderation on some of those discussions,” Longdon says. “I dropped two gun bills this session. I’m not confident any of them will make it through, but we’re finding more common ground than I think perhaps we were all prepared to. I think once we move past the hyperbole, we find more opportunities to agree.”

But that doesn’t mean Kelly will put the issue front and center. His announcement did not highlight his six years of advocacy. The four-and-a-half-minute video included footage of the mass shooting in Tucson that left six dead and Giffords critically wounded but makes vague reference to his subsequent activism, noting only that Giffords “needed an advocate” after the massacre. Meanwhile, Kelly didn’t shy away from other policy initiatives Democrats have lately championed: Affordable health care, climate change, and job growth all got a shoutout.

But if Sinema’s success in the fall is any indication, that’s an advisable tack for Kelly to take. As the first Democrat elected to the Senate in a quarter-century, Sinema also did not put gun reform at the center of her campaign platform, opting instead to emphasize access to health care, services for Arizona’s increasingly aging population, and the economy. And all of these issues, Volgy says, have been leaning in favor of Democrats lately. “I cannot find a defining issue right now that’s trending toward Republicans in the state,” he says.

Volgy also wouldn’t read too much into the early gestures, noting that Kelly’s work in the gun space is well known, while his other positions may not be. “He’s done a lot of important advocacy work, and that’s clearly understandable given what happened to Gabby,” Volgy explains. “It’s one thing to be an advocate for a cause; it’s another to run for Senate. He’ll be very clear as to where his positions are, but I don’t think the campaign is going to be focused specifically on any one issue.”

A spokesperson for Giffords says Kelly will step down from his official capacity as a spokesman and strategist for the organization as he focuses on his Senate campaign. But if he decides to put gun reform front and center, his opponent will be a prime foil: According to the Center for Responsive Politics, Republican Sen. Martha McSally—the appointee currently serving in McCain’s seat—received the second-most contributions from the NRA of any candidate during the 2018 cycle.