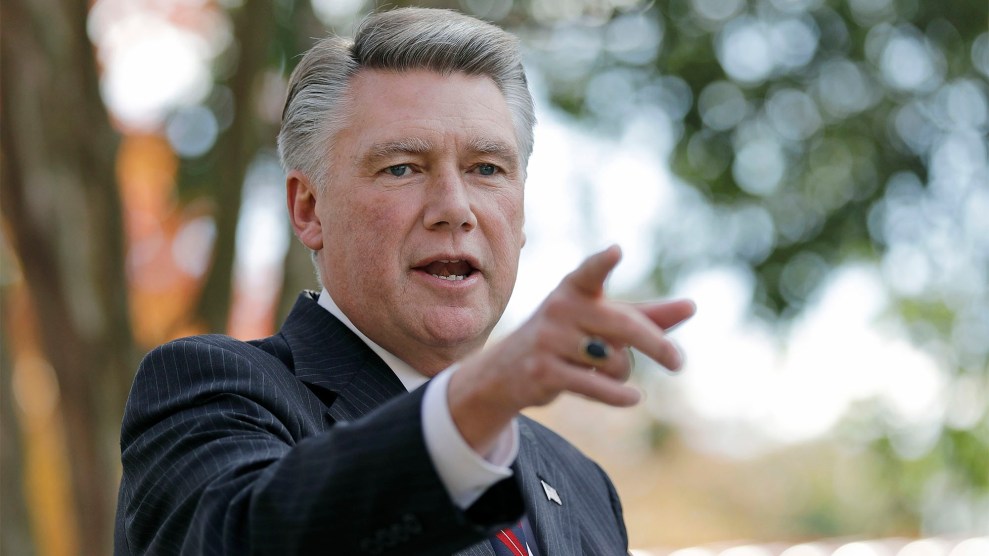 There’s still one empty seat in the House of Representatives because of serious accusations of election fraud. And now Republicans might block the process to call for a new election there.

North Carolina’s 9th Congressional District has been vacant since November, when Republican Mark Harris defeated Democrat Dan McCready by 905 votes, but the state board of elections refused to certify Harris after evidence emerged that a consultant hired by his campaign may have committed widespread absentee ballot fraud to help the Republican campaign.

Gov. Roy Cooper, a Democrat, appointed new members to the board of elections on Thursday, but Republican members could block a vote to hold a new election in the 9th District. The previous election board was dissolved after a court found that the Republican-controlled Legislature had unconstitutionally stripped Cooper of the power to appoint a majority of its members. Democrats now have a 3-2 majority on the new board, but it takes four votes to order a new election, giving the Republican members veto power.

Democrats have accused a consultant hired by the Harris campaign, McCrae Dowless of Bladen County, a rural area in southeastern North Carolina, of illegally tampering with absentee ballots that he collected from voters. Harris—who has acknowledged hiring Dowless—won 61 percent of Bladen County’s mail-in ballots, even though just 19 percent of those mail-in ballots came from registered Republican voters. Dowless stands accused of not submitting absentee ballots that may have been marked for McCready, while filling out some ballots for Harris without voters’ consent. In a razor-thin election, this may have changed the outcome of the race. Dowless, a convicted felon, has also drawn scrutiny for his handling of absentee ballots in previous elections dating back to 2010. North Carolina officials asked the Justice Department in January 2018 to investigate Dowless for absentee ballot fraud alleged to have occurred in 2016.

Democrats have a 3-2 majority on the new board, but it takes four votes to order a new election, giving the Republican members veto power.

North Carolina Republican Party Executive Director Dallas Woodhouse told the Raleigh News & Observer that the GOP members would resist calls for a new election. “Our team are confident that our nominees…will come to the only reasonable conclusion, that is (the) race should be certified because Dr. Harris won more legal votes and we believe no evidence can possibly show otherwise,” he said. Woodhouse had told CNN in December that his party would support a new election if the evidence of election fraud proved that Harris did not rightfully win the race. Despite hyping discredited claims of voter fraud for years, Republicans have said little about the election fraud that allegedly occurred in North Carolina.

The state board of elections has the power to call for a new election if the evidence of fraud or voter disenfranchisement is “sufficient in number to change the outcome of the election” or “irregularities or improprieties occurred to such an extent that they taint the results of the entire election and cast doubt on its fairness.”

One new Republican member of the board, Ken Raymond of Winston-Salem, has a long history of supporting efforts to curb access to the ballot. In 2014, as chair of the Forsyth County Board of Elections, Raymond led the effort to close an early-voting site on the campus of Winston-Salem State University, a historically black college. Four years later, as a member of the previous state board of elections, he supported closing a voting site at North Carolina State University, which he said would benefit students over the rest of the electorate, and opposed efforts to allow early voting on Sundays, when black churches traditionally hold “Souls to the Polls” voter mobilization drives.

“From what I’m hearing from the speaker and the general feeling that I’m getting is that people are going to walk away from this, listening to this, believing black people can’t vote unless it’s on Sunday, so we have to have voting on Sunday, and I want to straighten that out: African Americans can find the polls during the week, we can,” Raymond, who is himself African American, said at a board meeting. A federal court found that a law passed in 2013 by North Carolina’s Republican-controlled Legislature curtailing Sunday voting targeted African American voters “with almost surgical precision.”

The other Republican member of the board, David Black, the former chair of the elections board of Cabarrus County, outside Charlotte, has made few public statements about voting rights.

If the state board of elections deadlocks, the US House, which has already declined to seat Harris, could declare a vacancy in the 9th District, giving North Carolina’s governor (a Democrat) the power to schedule a new election.

The board is scheduled to hold an evidentiary hearing in February on the contested election, and it will meet next week to set a specific date for the hearing. At a court hearing last month, a lawyer for the state said “it’s an open question who won this election,” suggesting that absentee ballot fraud could have put Harris over the top.