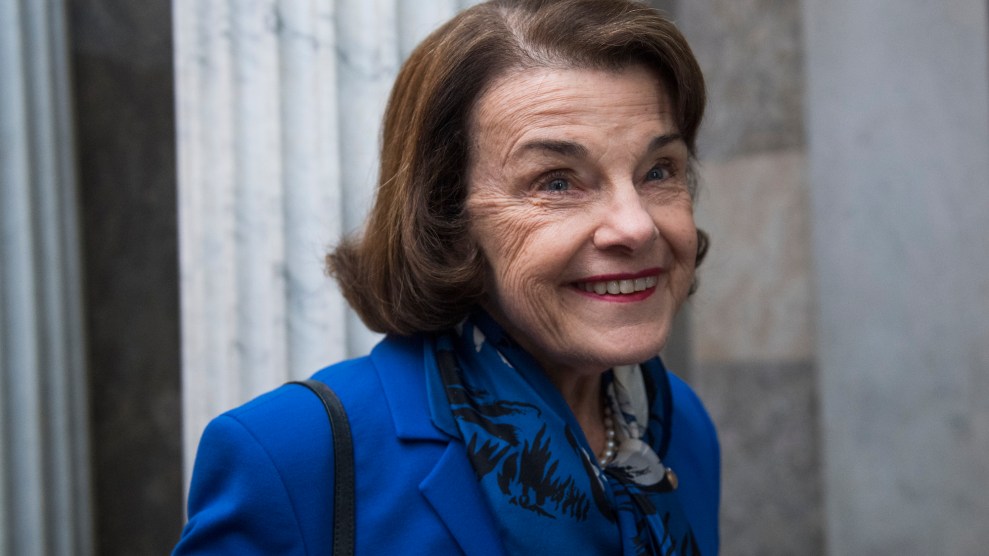 The internet lost its mind on Friday evening when the Sunrise Movement, a climate activism group composed of youthful volunteers working to gain support for the Green New Deal, shared a video of school-age activists visiting Sen. Dianne Feinstein’s (D-Calif.) San Francisco office to ask her to support the resolution. Senate majority leader Mitch McConnell (R-Ky.) has promised to hold a vote on the Green New Deal, which aims to transition the US to 100 percent renewable energy by 2030, as early as next week, a vote that is expected to divide centrists Democrats from their progressive colleagues who back the proposal.

The six-term senator who recently won reelection has her reasons for being skeptical about the Green New Deal—mainly, according to the exchange, the funding required for the plan and the ambitious 10-year timeline proposed for the transition. But her reactions to the earnest young constituents who presented her with a letter about the subject ranged from dismissive to derisive, and the encounter went viral.

This is how @SenFeinstein reacted to children asking her to support the #GreenNewDeal resolution — with smugness + disrespect.

This is a fight for our generation's survival. Her reaction is why young people desperately want new leadership in Congress. pic.twitter.com/0zAkaxruMI

One reason was Feinstein’s argument that the activists were naive and she’s not. “I’ve been doing this for 30 years,” she tells the group. “I know what I’m doing.” And just to show how much more experienced she was, she used political jargon to explain that the margin of her reelection win meant she could navigate climate policy better than they ever could. The New York Times’ Maggie Haberman couldn’t quite wrap her head around that logic:

It got worse when the activists tried to explain they are her constituents, and therefore she has to listen to them. Apparently, that all depends on how one defines “constituents.” When she learns the activists aren’t old enough to vote, she says, “Well, you didn’t vote for me.” The exchange apparently left CNN’s Rebecca Buck in tears.

Feinstein asserted that she has an alternative “responsible resolution” that would be a more effective means of combating climate change than the Green New Deal. When a protester suggested that any resolution that doesn’t take “bold, transformative action is not going to be what we need,” Feinstein shot back. “Well, you know better than I do,” she said, “so I think one day you should run for Senate, then you should do it your way.” There was a slight problem with that logic, as Varshini Prakash, the co-founder and executive director of the Sunrise Movement, noted:

“I think that one day you should run for Senate. Then you do it your way”

We have 12 years to transform our entire fucking economy to stop climate change.

The child Feinstein was talking to won’t be old enough to run for Senate by the time her future will be condemned to chaos.

Proponents of the Green New Deal and climate allies expressed outrage over Feinstein’s reaction. Longtime climate activist and 350.org founder Bill McKibben said Feinstein proved the point that Rep. Ocasio Cortez and the youth-led Sunrise Movement has been trying to make: Younger generations have to fight for climate change because the the older generations won’t.

Well, say this for her: @SenFeinstein has demonstrated once and for all why young people need to be in the lead in the climate fight. The job of the rest of us is to have their backs. https://t.co/lal7deOwlL

The widely-circulated two-minute video had been edited down from a livestream the Sunrise Movement did from the office, something Feinstein defenders were quick to note. In the full 15-minute video, Feinstein does offer a tentative “yes” vote on the Green New Deal, engages the activists in a conversation about substantive climate policy and, at one point, offers one of them an internship with her office. But the tone of Feinstein’s remarks still came through in the full exchange, something New York writer Rebecca Traister noted in her defense of the internet’s outrage:

After wading through gross insults re evil environmentalist children AND gross insults re DiFi as dinosaur who needs to die, I watched full video. No, it's not AS BAD as edited version, but actually, I still think it's pretty bad. https://t.co/GbKb0cw6yJ

Not everyone slammed her. Right-wing commentators Ben Shapiro, Erick Erickson, and Curt Schilling set aside their party affiliations to celebrate Feinstein’s rejection of the resolution.

But that wasn’t the end of Feinstein’s climate politics woes on Friday. Later that evening, Oil Change US, a climate advocacy group that encourages politicians to reject campaign donations from fossil fuel companies, revealed that Feinstein had broken the “No Fossil Fuel” pledge she took during her 2018 reelection campaign. According to FEC filings, Feinstein had received $12,500 from oil companies last cycle.

BREAKING: We just delivered this letter to @SenFeinstein's office, detailing her breaking of the #NoFossilFuelMoney Pledge she signed. Read it here: https://t.co/kA0Y7dE8kj pic.twitter.com/6jdZmjcUrl