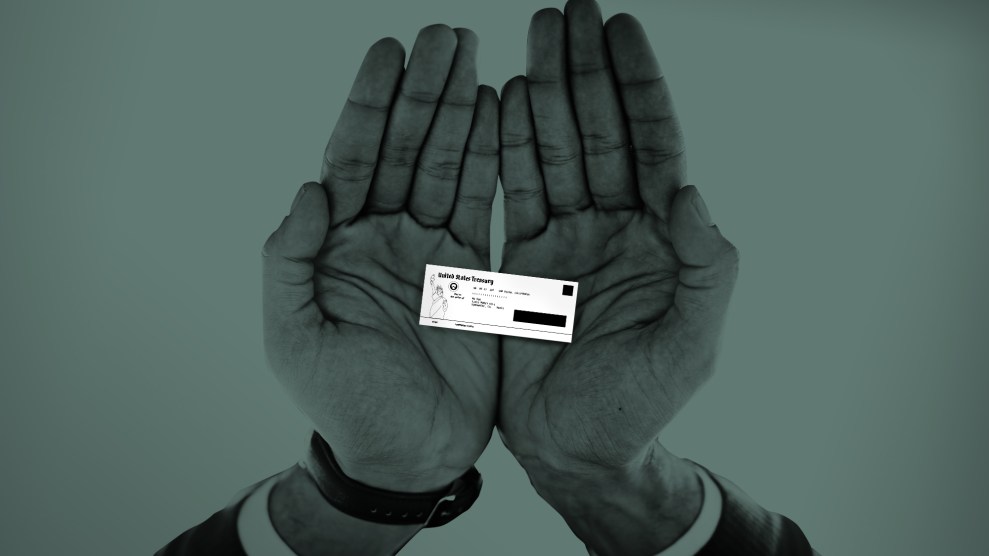 If you’ve already filed your taxes this year, perhaps you’ve felt a certain sting: The one where Turbotax gets to the final screen or your accountant gives you a number and you learn that your 2018 refund is lower than you’d hoped. Maybe by a lot. Or worse, that after years of collecting refunds, suddenly you owe taxes.

Americans everywhere are having these unpleasant experiences as they file taxes for the first time under the Republican tax reform bill passed during President Donald Trump’s first year in office. Outraged taxpayers have taken to social media and the press, and official numbers back up their complaints: Internal Revenue Service statistics show a 26 percent decrease in the number of refunds issued compared to the same time last year, a $39 billion decrease in the total amount of money refunded, and a 17 percent decrease in the average refund size. Meanwhile, news reports show that about 3 million more Americans will owe taxes this year.

Mother Jones: So there has been all this news coverage about lots of people seeing smaller tax refunds, and IRS statistics back that up. What are some of the possible factors contributing to this change?

“The tax laws that were passed in 2017 have really changed people’s tax situations.”

Joseph Rosenberg: We are still relatively early in filing season. So we have IRS data from the first two full weeks, but it still represents a fairly small share of returns and, in particular, refunds that will be issued. It is certainly the case that over those first two weeks, the number and amount of refunds is down. But we also know it’s still early and we also have potentially lingering effects from the shutdown or just maybe general delays as people adapt to the new law and might be filing later than they would have in previous years.

That being said, the tax laws that were passed in 2017 have really changed people’s tax situations. So there are two things going on. One, they’re filing under the new tax laws and that will change from prior years. But also there was a change in withholding amounts put in place last year in response to the tax cuts. The net of those two effects is going to show up in refunds.

MJ: Got it. Tell me a little bit more about the withholding piece. How exactly are changes to withholding tables affecting returns?

JR: So for employers who withhold federal taxes out of their employees’ paychecks, every year the IRS releases tables and formulas so employers know how much to withhold. Last year’s reflected not just the normal changes but also the effects of the new tax law. Overall, people that have federal income taxes withheld would have seen that number drop, being reduced early in 2018—which meant that they took home a larger paycheck every two weeks or however often they get paid. The rub then becomes that when people go to file their 2018 tax return, they’re going to be weighing the amount of the tax cut they received through lower withholding last year versus the actual tax cut they’ll be receiving now. And it’s that difference that is the change in the refund.

MJ: So even as people are seeing smaller refunds, the majority of people will still have a smaller overall tax bill?

JR: Certainly, that’s the case. This was a very large tax cut—about $1.8 trillion. Most taxpayers will pay less under the new rules than they would under the old rules. We have estimates that if you take everybody, about two-thirds of taxpayers should expect to see their taxes decreased as a result of the bill. About 6 percent will see a tax increase, and the remainder being about the same.

MJ: That lines up with Treasury Department estimates that also said the vast majority of people should see an overall tax decrease. If that’s the case, why do you think there’s been such a hubbub over the decreased refunds, even if overall, people will actually pay less in taxes?

“A lot of people…their tax refund may be their biggest financial transaction of the year.”

JR: This is an interesting case of something that we know is true and that behavioral economists study. What happened last year is some of that tax cut went out in little increments in the form of higher take-home pay that, in some cases, might have even been larger than the tax cut. So now they’re making up the difference—they’re going to see either a smaller refund or actually owe taxes. And it’s generally the case that for relatively small changes in withholding—if your paycheck goes up by $10, $20, and $50—you may notice that at first. But it’s something that you get used to and that will be less noticeable than a large payment or refund at the end of the year.

MJ: What is the broader social and economic impact of so many people getting a smaller one-time lump sum, even when their overall tax bills are actually lower?

JR: You should certainly expect some economic effect. In terms of the overall economy, what we’re talking about is relatively more of the tax cut slowly delivered over the course of last year versus being delivered in the early part of 2019. That might have an effect on the economy: People have less money coming in from refunds, so they have less money to spend on consumption and other uses.

The other social or political impact I find fascinating is that this was a very large overall tax cut—$1.8 trillion—yet it’s been remarkably unpopular. Look at public opinion polls and at complaints that there were more benefits to corporations and high-income individuals and less to lower- and middle-income taxpayers.

This issue about the size of refunds is feeding on that effect. People don’t seem to care that they might’ve gotten a little bit more in their paychecks, but they are upset at the notion that either their refund was reduced or—in a more extreme case—that they actually went to owing taxes when they’re used to getting a refund every year. That reinforces the perceptions about the tax bill.

MJ: So a lot of people are upset about a change in process more than about a negative financial effect. Overall, they haven’t lost money—it’s just that their refund is smaller.

JR: It’s a special case, where you’re talking not just about the level of taxes itself, but how much is delivered as a refund. And the negative surprise ends up more salient than the positive surprise.

MJ: So you think the frustration about refunds is a broader reflection of the unpopularity of the tax cuts and jobs act?

JR: Simply, the majority of Americans pay less in taxes as a result of this bill, but far fewer than that percentage say they support it or like it. So it is a question about, okay, well why do people seem so sour on this tax bill?

MJ: What are the possible answers to that question?

JR: There are some people that view this very large tax cut as not worth the cost in terms of the increased deficits. But there’s also the distributional aspect to it: While the law did cut taxes for most people, it cut them relatively more for higher-income people than it did lower-income people. We know from public opinion that raising taxes on the wealthiest is politically popular. So what we’re seeing is the reverse of that, where tax cuts for high-income people are unpopular.

MJ: Switching gears: How big of a contributor do you think the new State and Local Taxes (SALT) deduction cap is to smaller refunds?

JR: It’s certainly one of the contributors. If you look at the tax bill overall, there are a couple of major changes that were used to reduce the overall size of the cut, to offset the enacted reductions in tax rates. One of those was the $10,000 SALT deduction cap, as well as some other changes; the main other one was eliminating personal exemptions, which were rolled into the larger standard deduction. But if you claimed more than $10,000 in state and local taxes last year, the SALT cap is one of those factors that will either reduce your tax cut—or, actually, it’ll throw you into the 6 percent of people who will see higher taxes.

MJ: How do you think what’s going on with refunds will change perceptions of the tax bill?

“It was a very costly bill that will do relatively little for growth.”

JR: It’s a little too early to say. If refunds are a little bit down but stay roughly the same, this may not turn out to be such a big deal. If there really is a big change in refunds, you’d expect it to have some effect. Again, what that means is that more of the tax cut was delivered last year relative to now. But if opinion in general follows the money, when the money comes out, you would expect it to have some effect. I think it’s too early to draw broad conclusions.

This focus on what level refunds are and how they compare to last year is more about timing of the tax change than it is about the effects. Unless we think we got the effects completely wrong, refunds don’t provide a ton of new information in terms of evaluating the bill.

MJ: So then what should be used to evaluate its pros and cons?

JR: We did a number of analyses at the time [the bill passed], and the takeaways were that it was a big tax cut; it had some distributional concerns, mainly that it delivered on average larger gains as a percentage of income to higher-income people than lower-income people; it would have some positive effects on the economy in the short run but relatively little over time; and, while there were some features of simplification and reform, it didn’t do a whole lot of deep reform, at least in the individual income tax system. And, of course, it’s all temporary: Most of the individual provisions will expire at the end of 2025.

So that analysis that we did is still how I think about the bill: It was a very costly bill that will do relatively little for growth. But that view is relatively unaffected by what we’ve seen in the last couple of weeks.

MJ: So that’s the tax expert perspective. But do you think that for most people, the focus on refund levels will be an important lever by which they judge the bill?

JR: I think that’s certainly the case. The lens by which a tax expert looks at the bill will not necessarily be the same one that ordinary taxpayers will use.