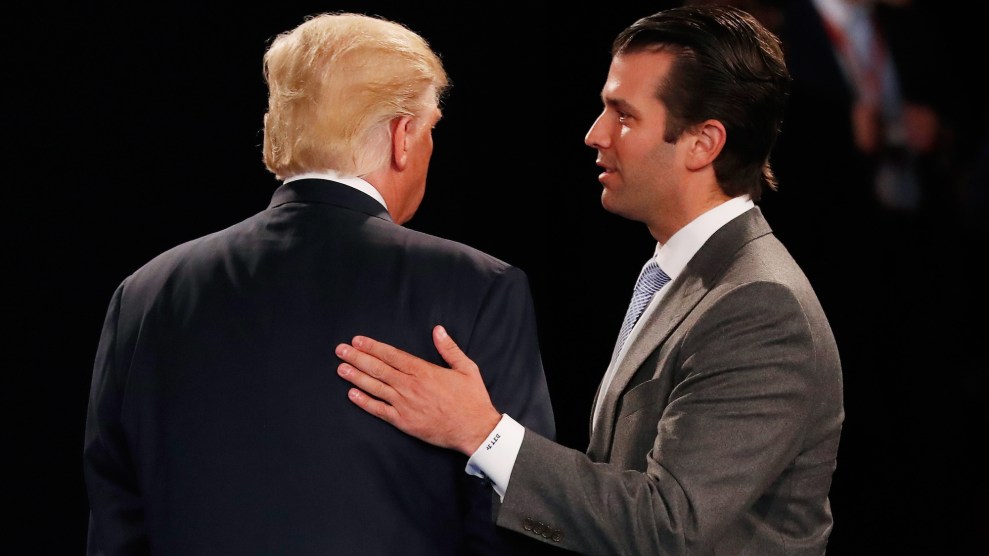 Donald Trump Jr. has a new investigation to worry about. House Oversight and Reform Committee Chairman Elijah Cummings (D-Md.) says that Michael Cohen’s blockbuster testimony this week will fuel new investigative efforts by the panel—and those likely will target the president’s son. “All you have to do is follow the transcript,” Cummings told reporters Thursday. “If there are names that were mentioned or records that were mentioned during the hearing, we want to take a look at all of that.” And another Democratic member of the committee tells Mother Jones that Trump Jr. “certainly is at the top of the list.”

Cohen’s testimony implicated Trump Jr. in multiple potential crimes. Cohen suggested Trump Jr. took part in a conspiracy to evade campaign finance laws (regarding the hush-money payments Cohen made to porn star Stormy Daniels) and lied to congressional committees about what he knew of Russian contacts with Trump advisers during the 2016 election. Cohen, who will soon be heading to federal prison for having previously lied to Congress and other crimes, also referred to possible insurance and financial fraud at the Trump Organization, where Trump Jr. is a top executive. As a result of Cohen’s testimony, the House intelligence committee is expected to call Trump Organization Chief Financial Officer Allen Weisselberg in for questioning, and it will hold what the panel’s chair, Rep. Adam Schiff (D-Calif.), said will be an open hearing on March 14 with Felix Sater, with whom Cohen secretly pursued Kremlin support for a deal to build a Trump-branded tower in Moscow even as Trump told voters he did not have any business in Russia.

The president’s eldest son is already under scrutiny by special counsel Robert Mueller and prosecutors in the Southern District of New York. Attention from the oversight committee could worsen his plight. Unlike federal prosecutors and the House and Senate intelligence committees, the oversight committee tends to operate in public, with open, high-profile hearings. This adds a form of pressure for witnesses that the other congressional probes so far have lacked. And the panel has effectively unlimited jurisdiction and a larger investigative staff than other congressional committees, giving it power to dig into almost any matter, criminal or not. Moreover, a congressional investigation can go further than a criminal inquiry because it is not limited to only pursuing illegal acts; it can scrutinize and publicize wrongdoing or questionable conduct that might not lead to prosecution.

There’s a lot of stuff for an oversight investigation to examine regarding Trump Jr.

During his Capitol Hill appearance, Cohen presented checks he received from Trump in 2017 reimbursing Cohen for the $130,000 hush-money payment that the longtime Trump fixer personally made before the election to Stormy Daniels, who says she had a sexual affair with Trump when he was married. Cohen has already pleaded guilty to violating campaign finance laws by paying off Daniels, and in that criminal case he implicated Trump in an apparent conspiracy to violate campaign finance laws. On Wednesday, Cohen shared new details, describing how Trump, even after he was sworn in as president, directed a scheme to disguise the payments reimbursing Cohen as legal retainer fees. Cohen said Weisselberg, who received limited immunity to testify before a federal grand jury in New York about this case, and Trump Jr. had both signed checks that he received. One of the checks released by the committee appears to bear Trump Jr.’s signature.

In an exchange with Cohen, Rep. Ro Khanna (D-Calif.) noted that this arrangement, as Cohen described it, involved extensive fraud. “The president directed transactions in conspiracy with Allen Weisselberg and his son Donald Trump Jr. as part of a criminal conspiracy of financial fraud?” Khanna asked. “Is that your testimony today?”

And there’s more. Trump Jr. has testified privately before three congressional committees about the infamous June 9, 2016, Trump Tower meeting during which he, Jared Kushner, and Paul Manafort met with a Russian emissary whom they expected to provide them with dirt on Hillary Clinton as part of a secret Russian government effort to help the Trump campaign. In his testimony to the Senate Judiciary Committee—the only one of these interviews for which a transcript has been released—Trump Jr. testified that he did not tell his father about that meeting in advance. Donald Trump also reportedly made the same claim in written answers he has provided to Mueller.

Cohen tells a different story. He testified that around the time of the meeting, he overheard Trump Jr. tell his father, “The meeting is all set.” Trump responded, “OK, good…let me know,” according to Cohen. The longtime Trump fixer said he later concluded that this furtive exchange was about the Trump Tower meeting, though he noted he was not certain.

Trump Jr. already faced accusations that he lied to Congress about the Trump Tower meeting. When asked in his Senate Judiciary Committee interview about a misleading public statement that he issued after news of the meeting broke, Trump Jr. claimed he said he never spoke to his father about the statement and suggested the president was barely involved. Trump’s lawyers, however, later admitted that he “dictated” the statement. Trump Jr. apparently made similar claims to the House intelligence committee. “Donald Trump is lying or Donald Trump, Jr. lied during the House Intel investigation,” Rep. Castro (D-Texas), a member of the House intelligence committee, tweeted after news of the president’s close involvement in the statement.

And still there’s more. Cohen pleaded guilty to earlier lying to Congress about Trump’s efforts during the 2016 campaign to develop a Trump Tower in Moscow. During his appearance before the oversight committee, he went into detail about the deal and Trump’s lies about it—and he offered testimony that could be trouble for Trump Jr. Cohen testified that he had briefed members of the Trump family—he later specified that he meant Trump Jr. or Ivanka Trump—on the Moscow tower deal “approximately 10 times.” That account belies claims by both Ivanka Trump and Trump Jr. that they knew little about the deal. The problem for Trump Jr.? He has made this assertion under oath.

In 2017, Trump Jr. told the Senate Judiciary Committee that he knew little about the project: “I was peripherally aware of it, but most of my knowledge has been gained since as it relates to hearing about it over the last few weeks.” He made similar claims to the House and Senate intelligence committees, according to an aide familiar with his statements to both panels.

Members of Congress have already made it clear they find this and other sworn statements by Trump Jr. suspect. “There’s at least two occasions where he lied to the committee,” Rep. Jackie Speier (D-Calif.), a member of the House intelligence committee, told CNN in December. That panel has formally sent the Justice Department transcripts of all its interviews of Trump-Russia witnesses, a step Schiff has said could lead to perjury charges against some witnesses.

Likewise, Senate Intelligence Committee Chairman Richard Burr (R-N.C.) says he has asked the Justice Department to prosecute witnesses for lying to his panel. “I won’t tell you the number of times, but we have made referrals to the special prosecutor,” Burr said in November. Asked if Trump Jr. was the subject of one of those referrals, a Burr spokeswoman declined to comment.

Last summer, responding to questions about the veracity of Trump Jr.’s statements to Congress, his attorney, Alan Futerfas, said his client had been “professional and responsible” when interviewed by lawmakers and Mueller. “We are very confident of the accuracy and reliability of the information that has been provided by Mr. Trump Jr., and on his behalf,” Futerfas said. Futerfas, who also represents the Trump Organization, did not respond to questions about Trump Jr.’s statements to Congress. A woman who answered the phone at Futerfas’ law firm hung up when told the call related to Cohen’s testimony about Trump Jr.

It is now clear that in the wake of Cohen’s testimony, Trump Jr. will have to contend with an aggressive oversight committee probe. “This is not the end of the process, but the beginning,” Cummings said Wednesday.