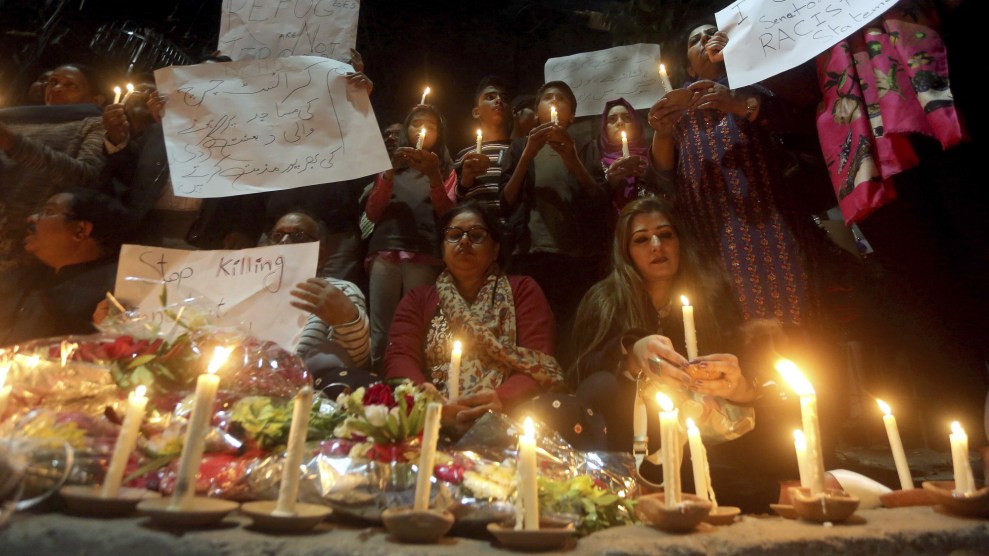 A vigil for the Christchurch victims in Lahore, Pakistan. K.M. Chaudary/AP

A Pakistani man who tried to stop the shooter during a massacre in Christchurch, New Zealand, will be honored with a posthumous national award, Pakistan’s prime minister announced on Sunday. Naeem Rashid, 50, tried to tackle the gunman outside of one of the two mosques before being shot and killed along with his 21-year-old son, Talha.

Pakistani Prime Minister Imran Khan tweeted on Sunday that Rashid was “martyred trying to tackle the White Supremacist terrorist,” and that his courage would be recognized with a national award. He also declared Monday a national day of mourning. “I blame these increasing terror attacks on the current Islamophobia post-9/11 where Islam & 1.3 bn Muslims have collectively been blamed for any act of terror by a Muslim,” he tweeted on Friday, soon after the attack.

Rashid was a teacher who moved to New Zealand almost a decade ago, and had been in the midst of planning his son’s wedding. “We were talking to Naeem about the family coming to Pakistan for Talha’s wedding,” Khurshid Alam, Rashid’s brother, told the Washington Post. “Now we are talking about his death and funeral arrangements.”

“I still can’t understand or believe why and how this happened,” Ambreen Rashid, Naeem’s wife, told the Khaleej Times, a newspaper based in the United Arab Emirates. “But, I know that my husband is a hero. He always helped people and even in his last moments, he did what he could to help others.”

Seven other Pakistanis were killed at the shooting, which claimed the lives of at least 50 people. The suspect, a 28-year-old Australian man named Brenton Harrison Tarrant, has been taken into custody and charged with murder.

While New Zealand police have yet to release a detailed account of the incident, other stories of bravery have emerged: At the Linwood Mosque, Abdul Aziz, 48, immediately tried to confront the shooter, throwing a credit card machine at him and later a discarded shotgun at the man’s car before he drove away. “It was like my mind wasn’t working,” Aziz, who emigrated from Afghanistan, told the New York Times. “It was automatic reaction, like anybody. I was prepared to give my life to save another life.”