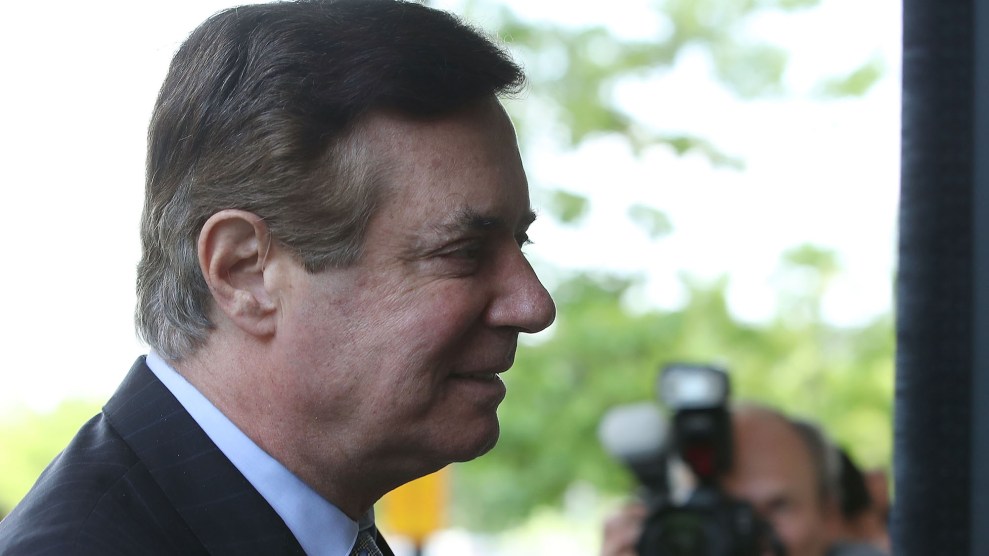 Paul Manafort arrives at a May 23, 2018, court hearing in Washington, DC.Mark Wilson/Getty Images

Let our journalists help you make sense of the noise: Subscribe to the Mother Jones Daily newsletter and get a recap of news that matters.
A federal judge in Virginia sentenced former Trump campaign chair Paul Manafort, 69, to 47 months in prison on tax and bank fraud charges on Thursday.
The sentence follows Manafort’s conviction in August on charges that he failed to pay taxes on at least $16 million he was paid in the early 2010s for consulting and lobbying work for former Ukrainian President Viktor Yanukovych, a pro-Russian leader who fled to Moscow after a 2014 uprising, and his allies. Manafort was also convicted of defrauding multiple banks to secure large loans after his consulting income dried up in 2015.
Manafort, who prosecutors say has not accepted responsibility for his crimes, sought to convey humility in remarks in court prior to receiving his sentence Thursday. “My life, personally and professionally, is in shambles,” he told US District Judge T.S. Ellis. Manafort told the judge that he appreciated the his fairness. “I know it is my conduct that brought me here,” Manafort added. “I ask you to be compassionate,” he told the judge, speaking from a wheelchair and wearing a green prison jumpsuit.
The sentence imposed by Ellis was lenient, falling short of sentencing guidelines calling for a maximum prison term of nearly 25 years. Ellis called that range “excessive” and said Manafort, a longtime lobbyist known for representing foreign autocrats who sought influence with the US government, “has lived an otherwise blameless life.” Manafort is scheduled to be sentenced by DC District Judge Amy Berman Jackson on separate charges of conspiracy and witness tampering next week. Manafort pleaded guilty to those charges late last year, agreeing to cooperate with special counsel Robert Mueller. But in November, prosecutors declared that Manafort had breached his agreement by lying to them about several matters. Jackson agreed that he had lied, suggesting she may impose a 10-year maximum sentence on Manafort. Jackson could make the sentence consecutive to the 47 months imposed by Ellis or allow them to run concurrently, limiting his prison time.
In a sentencing memo last month in the DC case, Mueller suggested Manafort receive a stiff sentence. The longtime lobbyist “presents a grave risk of recidivism” if he were released, prosecutors argued in the filing, noting he had admitted to committing crimes even after he was indicted. “Manafort chose repeatedly and knowingly to violate the law—whether the laws proscribed garden-variety crimes such as tax fraud, money laundering, obstruction of justice, and bank fraud, or more esoteric laws that he nevertheless was intimately familiar with, such as the Foreign Agents Registration Act,” the memo says. “His criminal actions were bold.”