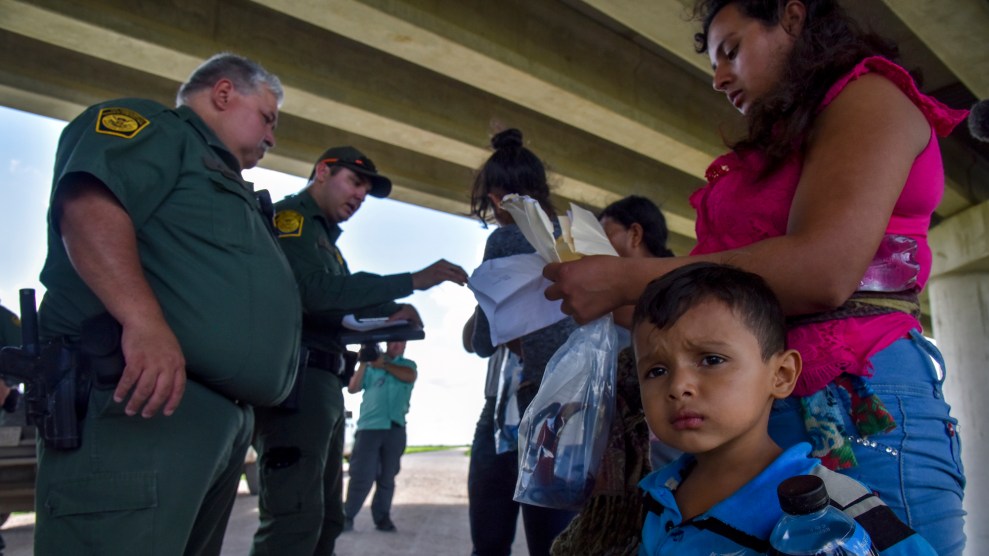 A three-year-old boy from Guatemala and his family are detained by Border Patrol agents after crossing into Texas without authorization in June.Jahi Chikwendiu/Getty

The Trump administration’s efforts to stop families from crossing the border are collapsing—and the administration is more or less admitting as much.

With family migration numbers at record highs, Customs and Border Protection announced this week that it will begin releasing some families who cross the border into Texas’ Rio Grande Valley, rather than transferring them to Immigration and Customs Enforcement for possible detention. The policy, which CBP said would be temporary, isn’t hugely significant on its own, since ICE has already been releasing most families because it does not have enough capacity to detain them. But measured against what the Trump administration set out to do, it’s a major defeat.

Donald Trump has essentially defined his presidency as a battle to stop people from crossing the border. Every step of the way, his tactics have failed spectacularly. Last spring, to deter migrant families from coming, the administration separated thousands of families by prosecuting parents who crossed the border without authorization. After the family separation policy disgusted Americans across party lines, Trump was forced to scrap it. Then he used national security powers to prevent people from receiving asylum if they crossed the border without authorization—only to have the plainly illegal move blocked in court. Finally, he squandered more political capital by (unsuccessfully) pushing Congress to give him extra money for a border wall, a vanity project that would do almost nothing to stop families from seeking asylum.

What does Trump have to show for all his cruelty and grandstanding? Less than nothing. Border Patrol agents encountered more than 163,000 family members and unaccompanied children from October through February, breaking the previous record of 157,000 set during the entire 2018 fiscal year. They are overwhelmingly Guatemalan and Honduran families looking to turn themselves in to Border Patrol, the first step in the asylum process, not the dangerous invaders Trump portrays them as.

Trump appears increasingly aware that there’s not much he can do to stop these families from coming. “We’re at a point where we’re just going to have to say…that there’s nothing we can do,” he said last Friday, adding, “The only option then is to release them, but we can‘t do that either.” Whether he admits it or not, that is the policy his administration has been forced to adopt.

What does Trump have to show for all his cruelty and grandstanding? Less than nothing.

The administration has little ability to deter asylum-seekers regardless of whether CBP transfers families to ICE. The latter agency does not have the capacity to detain most families, so it generally releases them, often with ankle monitors. The families that are detained by ICE can’t legally be held for more than about 20 days due to an Obama-era court ruling. And the overwhelming majority of detained families are found to have credible claims for asylum. Katy Murdza, who works with families at the detention center in Dilley, Texas, says no families have been deported from Dilley this year. The only other major family detention center in the country, in Karnes City, Texas, might not be a family detention center much longer: ICE is reportedly considering converting it into an in adult-only facility. That would further reduce ICE’s capacity to hold migrant families.

In other words, family detention is generally short-lived and pointless—but it comes at a great cost. ICE spends about $290 million per year—nearly $320 per person per day—to detain 2,500 parents and children at a time.

Trump inherited an overwhelmed immigration court system, but his administration’s policies, such as blocking judges from closing low-priority cases, have only made it worse. The case backlog has grown by more than 200,000 under Trump, to about 855,000 cases. These long waits can make it more likely for migrants to present weak asylum claims and then live and work in the United States while their cases are pending, since asylum-seekers become eligible for work permits after about six months. Others do not end up applying for protection and become undocumented. Immigrant advocates have long pressed the government to hire more judges and asylum officers to process asylum claims and eliminate backlogs. The Trump administration has instead chosen to focus mainly on detention and deterrence.

Its other policies having failed, the Trump administration is left to rely on a legally dubious initiative to force some asylum-seekers to wait in dangerous Mexican border cities while their cases are decided by US judges. The plan will make it nearly impossible for many, if not most, asylum-seekers to find lawyers in the United States, and their initial hearings have been predictably dysfunctional. The policy, commonly known as Remain in Mexico, began in San Diego in January and has now expanded to Calexico, California, and El Paso. But as with its predecessors, the policy has a good chance of being struck down in court. The American Civil Liberties Union and other groups will be in court on Friday to try to persuade a federal judge in San Francisco—an Obama appointee—to block the policy.

ICE is also moving forward with a regulation that would let it detain families indefinitely by withdrawing from the court settlement that prevents it from detaining families for more than 20 days. But the rule, which has not yet been finalized, is also almost certain to be challenged in court. Dolly Gee, a progressive federal judge in Los Angeles, oversees the settlement agreement and has already ruled against the administration on family detention, citing its “tortured interpretation” of the court settlement. If she blocks the rule, the administration will have exhausted just about all of its current options for deterring migrant families.

There’s an element of strategy to the Trump administration’s claims of helplessness in the face of rising numbers of migrant families. It wants Congress to pass legislation that would allow it to detain families indefinitely and deport them more quickly. Under another president, Congress might consider some of the legislative changes favored by the Trump administration. But Democrats are unlikely to concede anything to a president who has crudely painted immigrants as drug dealers and rapists.

That leaves the Trump administration where it is now: hoping that at least one of the California judges gives it what it wants, and ready to blame them if they don’t.