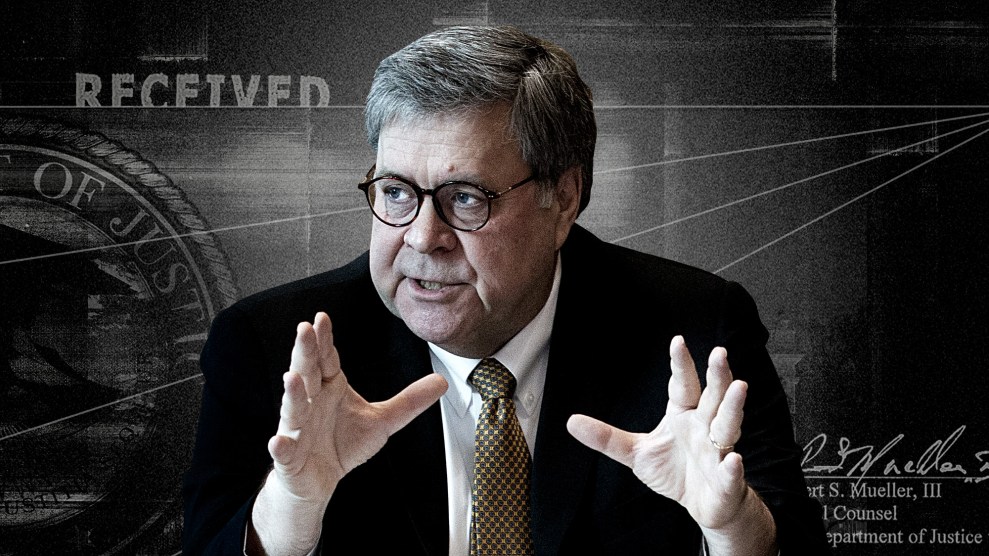 At his spin-before-release press conference on Thursday morning, Attorney General Bill Barr repeatedly bolstered Donald Trump’s mantra. “No collusion,” he said multiple times. And he gave the president a big pass on obstruction of justice, noting that Trump had been sincerely “frustrated” by the Russia investigation—as if that is a legitimate excuse. It was a great big PR wet-kiss for Barr’s boss.

His no-collusion comments were predictable. There has been no evidence that Trump and his lieutenants directly conspired in a criminal fashion with the Russian operators who hacked Democratic targets or those who ran a covert social media campaign in 2016 to sow chaos and help Trump. The issue has been whether Trump and his crew helped the Russian attack in other ways. For instance, Barr noted that no one associated with the Trump campaign “illegally” participated in WikiLeaks’ dissemination of material swiped from the Democratic Party entities and Hillary Clinton campaign officials. But his use of the word “illegally” raised Twitter eyebrows immediately. Was he suggesting that some Trumpers—Roger Stone, perhaps—did participate in this portion of the Russian assault on an American election, though it was not a crime?

On the obstruction front, Barr said that he and Deputy Attorney General Rod Rosenstein had disagreed with Special Counsel Robert Mueller on Mueller’s interpretation of legal theories related to Trump’s actions that might have constituted obstruction of justice. So the bottom line here: Obstruction remains an open question; read the report.

Moreover, Barr’s spin hid the basic foundation of the Trump-Russia scandal. Barr pointed out that the Russian government “sought to interfere in our election process.” That is, Putin’s attack was no hoax. Yet Trump and his crew, during the campaign and afterward, repeatedly denied that any such attack was underway or had occurred. Famously—or infamously—Trump at a press conference with Vladimir Putin in July 2018 said he saw no reason not to believe Putin’s denials.

During the election, when it mattered the most, Trump and his folks kept saying there was no Russian assault. They echoed Putin’s disinformation: Moscow is doing nothing. That provided cover for the Kremlin and helped it get away with this operation. And at the same time, they were enthusiastically interacting secretly with Russians. Donald Trump Jr., Paul Manafort, and Jared Kushner met with a Russian emissary whom they were told would give them dirt on Clinton. Foreign policy adviser George Papadopoulos through much of the summer of 2016 was trying to set up an “off the record” connection between the campaign and Putin’s office. All of that might well have been regarded as encouragement by Moscow. (So might have Manafort’s direct collusion with Russian nationals.) None of these facts are disputed. They raise the question: If Trump and his aides did not commit crimes, did they still engage in treachery and betrayal?

Barr, of course, did not address this. He stuck to the limited issue of whether there was any direct Trump involvement in the Russian attack. He pointed out that Mueller did investigate links and contacts between Trump campaign associates and Russians but did not uncover any “conspiracy to violate US law.” Yet not all misconduct is criminal conspiracy.

Barr was doing all he could to concentrate on possible criminality to distract from demonstrable wrongdoing. Since he was (rather deliberately) speaking before anyone listening could read what he was talking about, there was no way to tell if Mueller’s report explores this distinction and covers what occurred beyond possible crimes. Barr decided to contextualize the report before releasing it—an unorthodox decision—and now the contents of the report will have to catch up to the spin.