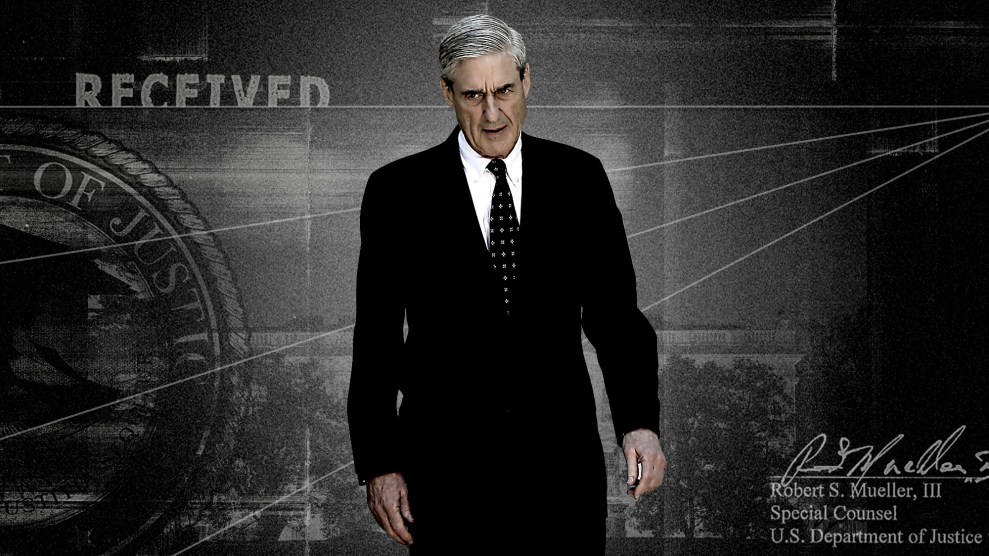 Since Richard Nixon resigned over Watergate, conventional wisdom on political scandals has been reduced to an axiom: “It’s not the crime, it’s the cover-up.” In other words, scandal-plagued politicians tend to get caught concealing bad deeds. This idea is a fallacy. After all, we only hear about the covers-ups that fail. Cover-ups often work—and that appears to be one takeaway from Robert Mueller’s report on Russian inference in the 2016 election.

The report does expose President Donald Trump’s alleged obstruction of justice, extensive lying by Trump and his aides, and the Trump campaign’s willingness to profit politically from Russia’s hack-and-dump efforts, while denying Moscow was orchestrating this attack on the election. The report also notes that Trump’s staff often stopped his efforts to obstruct justice: “The president’s efforts to influence the investigation were mostly unsuccessful, but that was largely because the persons who surrounded the president declined to carry out orders or accede to his requests.”

But Trump succeeded in thwarting key aspects of Mueller’s inquiry. By refusing to cooperate with the investigators and using his pardon power and other means to encourage witnesses to mislead investigators or decline to cooperate, the president prevented Mueller from conclusively answering questions about the Trump campaign’s interactions with Russia.

After more than a year of negotiations between Mueller and Trump’s lawyers, the president refused to agree to be interviewed by the special counsel’s office. He would only answer written questions about Trump-Russia contacts—but no questions related to any possible obstruction of justice. His written answers revealed little. Trump said more than 30 times that he could not recall in response to specific queries from the prosecutors. The report was blunt: Trump’s replies were “inadequate.” Mueller considered subpoenaing Trump to force him to sit for an interview but ultimately declined to do so because the resulting court fight would have caused “substantial delay” in completing his investigation. Trump, whose lawyers have said they feared he would have perjured himself in an interview, successfully ran out the clock on the request. Americans presumably know less as a result.

Trump also encouraged his longtime adviser Roger Stone to refuse to cooperate, with significant cost to the probe. Stone appeared to accurately predict WikiLeaks releases in 2016, while claiming he had communicated with Julian Assange, the group’s founder. Stone now says he never had contact with Assange and exaggerated his contacts with WikiLeaks to promote himself. Still, he was indicted in January in part for lying to Congress about those contacts. Mueller’s report suggests Stone did give the Trump campaign information on WikiLeaks. Rick Gates, a former top Trump campaign aide, told Mueller that Trump, after receiving a phone call during a drive to LaGuardia Airport, told Gates that WikiLeaks had more releases coming. Though the call’s timing and the caller’s identity seem to be redacted, other information indicates the caller was Stone, who was an informal Trump adviser in 2016. Cohen testified before the House Oversight Committee in February that he had overheard Stone telling Trump that WikiLeaks planned to release Democratic emails ahead of the Democratic National Convention. And Stone’s indictment revealed that he shared information about WikiLeaks’ plans with senior Trump campaign aides during the campaign. The Trump campaign, Gates told investigators, worked to benefit from WikiLeaks’ release of hacked emails, even planning a messaging campaign aimed at capitalizing on the group’s expected release of Clinton emails.

Stone said before and after his arrest that he would not testify against Trump, statements that won notice from Trump. In a November 28, 2019, interview, cited by Mueller, Trump praised Stone as “very brave” for refusing to flip. Days later, Trump tweeted that Stone had shown “guts.” This encouragement may have contributed to Stone’s refusal to offer an honest accounting of his contacts with WikiLeaks. As a result, there is still no clear answer to a key question in the Trump-Russia scandal: Did Trump and his advisers interact with WikiLeaks as it participated in the Russian plot to influence the election to help Trump?

Trump, of course, could clarify what occurred. But the president told Mueller in a written answer that while he spoke to Stone “from time to time” during the campaign, he had “no recollection of the specifics of any conversations I had with Mr. Stone between June 1, 2016 and November 8, 2016.” That is a striking claim. Trump says he remembers talking with Stone but nothing about what they discussed. Trump campaign contacts with WikiLeaks were clearly central to Mueller’s probe. But Stone’s alleged false statements and Trump’s supposed memory lapse impeded the investigation of this matter. By wielding his pardon authority and unique power to stiff an interview request, Trump crippled a key piece of Mueller’s probe.

Trump seemingly had similar success with Manafort. Around seven pages of the Mueller report detail public and private efforts by Trump and his lawyers to use the prospect of a pardon to discourage Manafort from cooperating with Mueller. The report notes that “during Manafort’s prosecution,” Trump “made it known that Manafort could receive a pardon.” It reveals that Gates claimed that in January 2018 Manafort told him that Trump’s lawyers had effectively dangled a pardon if the two of them stonewalled Mueller. “Manafort told Gates it was stupid to plead, saying that he had been in touch with the President’s personal counsel and repeating that they should ‘sit tight’ and ‘we’ll be taken care of,’” the report says.

For the next nine months, Manafort refused to plead guilty or cooperate. He seemed to give up only after his conviction on tax and bank fraud charges in Virginia. After that, he pleaded guilty to obstruction of justice, conspiracy, and other charges, agreeing to cooperate with Mueller. But prosecutors charged that Manafort kept seeking Trump’s favor by using the cooperation deal to funnel information on Mueller’s inquiry to Trump’s lawyers and lying repeatedly to prosecutors and a grand jury. US District Court Judge Amy Berman Jackson ruled in February that Manafort had lied about issues including his role in promoting a settlement to armed conflict in Ukraine that would essentially hand control of part of eastern Ukraine to Moscow.

On August 2, 2016, while working as Trump’s campaign chairman, Manafort met at a Manhattan cigar bar with a longtime Russian Ukrainian business associate, Konstantin Kilimnik, to discuss topics including a so-called “peace plan” for Ukraine. Kilimnik—whom the FBI assessed to have ties to Russian intelligence—wanted Manafort to seek Trump’s support for this deal, which would allow the creation of an autonomous region in eastern Ukraine. The plan was secretly backed by Viktor Yanukovych, the former pro-Russian president of Ukraine, whose 2014 ouster led to Russia’s invasion of the country. (Manafort had made millions as a political adviser to Yanukovych and his political party.) The proposal aimed at installing Yanukovych as head of the region.

Manafort told Mueller that the plan was “backdoor” means for Russia to gain control of eastern Ukraine. Mueller says Manafort agreed with Kilimnik that the plan needed a “wink” or “slight push” from Trump to succeed. Manafort told prosecutors he had rejected the plan in August 2016. But “when confronted” with an email that contradicted his claim, he admitted that he continued to discuss the plan with Kilimnik in 2017 and 2018.

Manafort, according to the Mueller report, was discussing this plan with Kilimnik while Russia was intervening in the 2016 election to help Trump and afterward. Was there an implied quid pro quo? Mueller’s office couldn’t find it. It did not uncover evidence that Manafort discussed the plan with Trump or his aides. But Mueller also says Manafort cannot be trusted. “While Manafort denied that he spoke to members of the Trump Campaign or the new Administration about the peace plan, he lied to the Office and the grand jury about the peace plan and his meetings with Kilimnik,” the report says. It also notes that Mueller’s investigators could not review all of Manafort’s communications, due in part to his use of encrypted applications to hide messages. Andrew Weissmann, a top prosecutor under Mueller, said in February that Manafort’s peace plan talks went to “the heart of what the special counsel’s office is investigating.” But Mueller did not get to the bottom of the issue. His report suggests that might be because Trump induced Manafort to lie.

Mueller was never expected to prove Trump did not conspire with Russia. You can’t prove that negative. But the report falls far short of the vindication that Trump claims. Mother Jones counted 37 instances where Mueller’s report says it could not “determine,” “find,” “uncover,” or “establish” facts related to alleged Trump campaign coordination with Russia. These investigative shortcomings resulted in good part from false statements, stonewalling, and questionable memory lapses by key witnesses.

The Trump-Russia scandal for now seems less like Watergate and more similar to the Iran-Contra affair, in which members of Ronald Reagan’s administration secretly sold arms to Iran and covertly used the proceeds to illegally fund the contra rebels in Nicaragua fighting the socialist government there. Watergate ended with the culpability of Nixon and his aides. Iran-Contra never achieved such clear closure. Independent counsel Lawrence Walsh’s 1993 report on that scandal concluded that top Reagan advisers had worked to scapegoat senior national security staffers “to protect the Reagan Administration” and the 1988 campaign of George H.W. Bush, who as vice president had been aware of the Iran-Contra scheme. Bush had been investigated by Walsh—and, it later turned out, had lied about his knowledge of the plot. But Bush, at the end of his presidency, pardoned six officials convicted of crimes in the scandal. He acted on the advice of his attorney general, William Barr, who then as now appeared bent on protecting the president he served. “I favored the broadest pardon authority,” Barr said later. “In for a penny, in for a pound.”