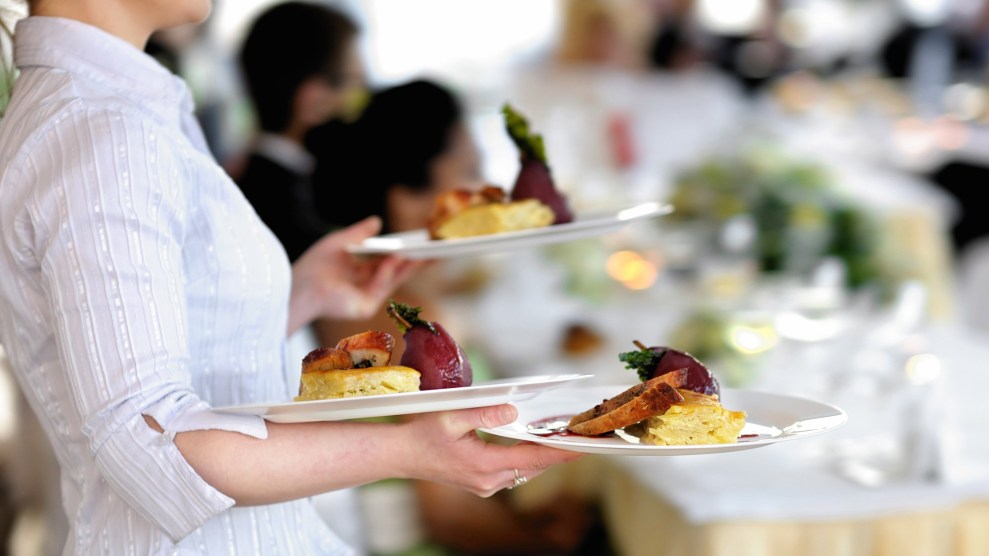 “It’s the first comprehensive federal legislation to address workplace harassment in the wake of #MeToo,” says Emma Boorboor, deputy organizing director for UltraViolet, a women’s rights advocacy group involved in crafting the bill. “It’s definitely bold legislation that responds to the needs of working people and sets out a vision of where we need to go and what we need to do to prevent harassment and assault in all workplaces.”

A record number of women running for and elected to Congress has brought further attention to the pervasive culture of sexual harassment and assault thrust into the spotlight by the #MeToo movement. While high profile cases in Hollywood drew the focus initially, low-wage workers and those in service and domestic positions were less in the spotlight—though this group has long been particularly vulnerable and is disproportionately made up of women and people of color. A 2017 analysis by the Center for American Progress found that more than a quarter of sexual harassment charges over the past decade were filed in industries dominated by service-sector workers, led by accommodation and food service jobs.

WATCH LIVE: Introducing the #BeHEARD Act with @RepKClark and @RepPressley and courageous leaders and advocates. Let’s put an end to harassment in the workplace and protect ALL workers in our country. https://t.co/AsZwV8687q

“When we started work on the Be HEARD Act, we’d heard a lot about abuses of power in Hollywood and in Congress. What we wanted to do was shine a spotlight on workers who were not in those headlines,” Sen. Murray said Tuesday at a press conference, flanked by restaurant, domestic, and factory workers and their advocates. “No matter who you are or where you work—whether you are the only woman on the board, or a janitor, or a farm worker, you should be treated fairly, respectfully, and with dignity.”

“We’d heard a lot about abuses of power in Hollywood and in Congress. What we wanted to do was shine a spotlight on workers who were not in those headlines.”

A key element of the new bill focuses on service sector employees who receive tips, most of whom work in the restaurant industry—one of the largest and fastest growing private-sector employers, with around 13 million workers. These employees are some of the lowest paid. About two-thirds of workers earning the federal minimum wage (which is $7.25) or less are in service occupations, mostly food preparation and serving, according to the Bureau of Labor Statistics.

Almost 80 percent of restaurant workers reported high levels of harassment from customers, according to a 2014 report by Restaurant Opportunities Centers (ROC) United. A big part of the problem stems from the United States’ tipping system. The practice was first popularized in the mid-1800’s, after slavery came to an end. When the federal minimum wage was first set in 1938, a separate hourly wage for tipped workers was established. As of January, workers in 17 states are only required by federal law to make the “tipped minimum wage”—just $2.13 an hour. “We’ve got a two-dollar wage increase over 150 years for basically the largest employer of low-wage women in America,” says Saru Jayaraman, co-founder and president of ROC United.

Some states require workers to earn the state’s standard minimum wage before tips, though it’s a tiny number—just seven. The rest fall somewhere in the middle. That means that in the majority of the country, there is enormous pressure on these restaurant workers to keep the customer happy, whatever that might entail. While women make up just over half of all restaurant employees, they account for two-thirds of tipped restaurant workers. “Sexual harassment is fundamentally about power, and wages are such a huge part of a woman’s power,” Jayaraman says.

Tipped workers in states using the tipped minimum wage were twice as likely to experience harassment as women in states that pay the same wage for all workers.

A major directive of the Be HEARD Act would take aim at this problem by getting rid of the federal tipped minimum wage all together. Data suggests this could put a major dent in sexual harassment. The ROC study found that tipped workers in states using the tipped minimum wage were twice as likely to experience harassment as women in states that pay the same wage for all workers. “It is unjust to depend on the generosity of others to pay our bills instead of knowing how much money we will make each week,” said Venorica Tucker, a 70-year-old restaurant worker who’s worked in the hospitality industry most of her life and spoke at the press conference. “You can’t stand up for yourself because the customer pays your wages not your employer, and employers imply the customer’s always right.”

Other parts of the legislation could be a boon for low-wage workers more generally. Notably, the bill would establish a grant program that funds legal assistance for low-income employees, and, perhaps even more significantly, it would broaden civil rights protections for all workers. Title VII of the 1964 Civil Rights Act prohibits employers from discriminating based on sex, race, and religion, which includes harassment, but the law currently only applies to businesses with 15 or more employees, leaving swaths of workers unprotected, like many domestic and farm workers, for instance. A 2018 congressional oversight report revealed that simply because they work at small businesses, 10 to 17 percent of US workers cannot bring these discrimination claims federally against employers, and only 37 percent of states have nondiscrimination laws that cover employers with one or more employees.

Low-wage workers, already often particularly vulnerable to abuse because of their gender and socioeconomic or immigrant status, then are also frequently exempt from federal protections since they commonly work as independent contractors or as one of only a few employees. The vast majority of domestic workers fall into this category, according to Mónica Ramírez, gender justice campaigns director for the National Domestic Workers Alliance. “There’s very few opportunities to seek justice if they’re harmed.”

At the press conference, Adriana Cazorla, a domestic worker from Washington state, described former employers wrestling her or asking her to clean the house naked, and denying her payment when she escaped. “For many years, I felt I needed to stay silent,” she said in Spanish. “I want to be heard. No one should have to go through the things that I have gone through.”

The new bill would expand protections to small business employees and independent contractors as well as interns, and volunteers would also receive protection. While other components of the legislation address harassment in the workplace more broadly, and also add legal protections for workers based on gender identity and sexual orientation, greater protection for the most vulnerable workers is particularly essential to tackling the problem as a whole, according to advocates.

“People are really starting to understand and starting to grapple with the epidemic of sexual harassment across industries,” Boorboor says. “To end sexual harassment and sexual violence in our country, there are specific changes that need to be made to lift up women in low-income industries, and those are the structural changes that are really going to make a huge difference.”

Speaker after speaker shared their personal stories Tuesday, including Rep. Pressley, who saw harassment firsthand during her years working in hotels. “I’m thinking about the hotel workers whom I worked alongside for six years when I was scrapping money together to help my family financially,” she said. “I’m thinking of my mother, Sandy, and my daughter, Cora, my past, and our country’s future. I am moved by each and every one who stand beside me today, by your courage, your strength, and your willingness to speak truth to power.”

“We’re trying to make the law better for everyone, including those that are least protected,” Ramírez says. “The workers in our country who are performing low-paid jobs are the backbone of this nation. They’re doing the work that makes all other work possible.”