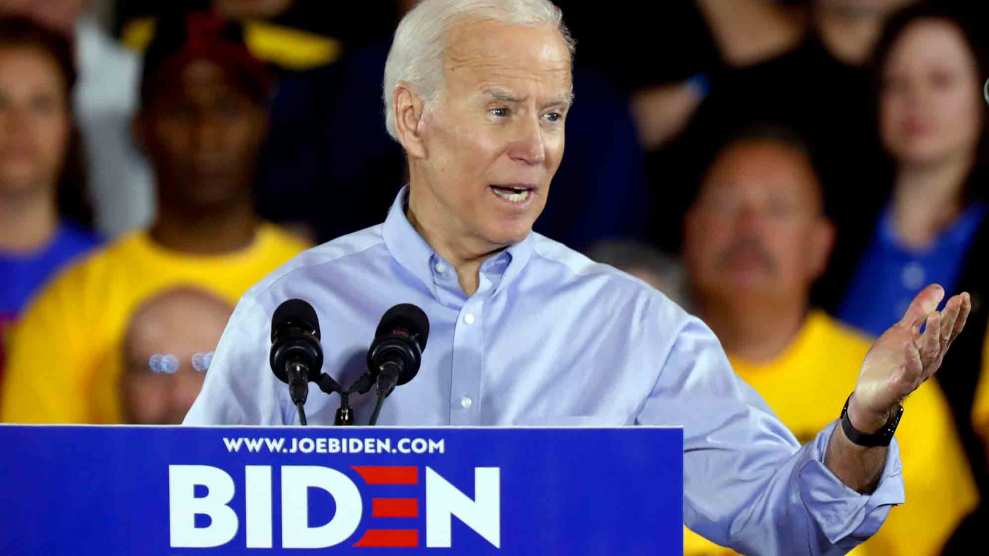 Former Vice President Joe Biden held the first rally of his 2020 presidential bid on Monday at a Teamster union hall in Pittsburgh. The candidate’s speech, which was under 30 minutes, foregrounded stories of people facing economic hardship, lamented political rancor, and offered glimpses of Biden’s comparatively moderate message in a primary season that, before his entrance into the race, had featured left-leaning Sen. Bernie Sanders atop polls of active candidates. While the Vermont senator’s name was never said onstage, many people in attendance were quick to criticize his campaign.

Pittsburgh’s industrial roots and union history played backdrop to Biden’s first public event, staged before 600 people in an aging union hall often rented out for weddings. The event was choreographed to suggest that Biden, who was born in Pennsylvania, could win the state in November 2020 by luring back traditional Democratic voters who stayed home or flipped sides in 2016, handing Trump a narrow victory. Biden said he’d chosen the city for his campaign launch because it represented places made up of “hardworking, middle-class Americans.”

“We…can’t have a nominee that’s too far left.”

International Association of Fire Fighters President Harold Schaitberger, whose union formally endorsed Biden on Monday morning, gave the rally’s first speech, where he made the argument explicitly. “He speaks to and connects with those workers who didn’t believe the last Democratic nominee heard about them, cared about them, and felt that their historic votes for the Democratic candidate were maybe just being taken for granted,” Schaitberger argued.

“In a field of good people putting themselves forward this primary season, the most important factor that we must determine in the Democratic nomination process is who can win,” Schaitberger continued in a barb that seemed targeted at Sanders, who has long described himself as a socialist. “Let me shoot straight with you, and this might not be popular in parts of the Democratic Party, but we…can’t have a nominee that’s too far left. It’s just that simple. A candidate that has high-minded ideals, maybe honorable ideas, but little chance of winning.”

Many attendees agreed. “I’m shopping,” Pat Martin-Carr, a retired school psychologist, said, explaining that she had yet to settle on a candidate. “I’m looking for who can win. I like some people, but it’s not about who I like. It’s about who can win…I don’t want someone too progressive.”

Brandon Groves, a 38-year-old social worker from nearby Wheeling, West Virginia, said that Biden was his “early favorite” of the 2020 candidates. “I’m not a big fan of Bernie,” Groves said, citing his position on restoring voting rights to felons. “I don’t like how far left the Democratic Party is going.”

The Biden campaign’s rollout strategy, which at one point was expected to also include an event in Charlottesville, Virginia, that would have been focused on white nationalist violence, evolved as his formal announcement grew nearer. In the end, no Charlottesville event took place, and Biden made only a perfunctory mention of Pittsburgh’s Tree of Life shooting and Saturday’s California synagogue attack during his speech on Monday. Instead, he focused his remarks on the dignity of work and a need to protect Americans harmed by corporate greed. “The basic bargain that used to exist, that Democrats and Republicans used to agree to, has been broken,” Biden claimed.

Biden endorsed a nationwide $15 minimum wage, argued anti-compete clauses that prevent low-wage workers from taking new jobs should be outlawed, and said there should be a reduction in onerous professional licensing requirements for jobs like hair-braiding. On health care, Biden distanced himself from candidates pushing Medicare for All and trumpeted the success of the Affordable Care Act, which was passed into law while he was serving as Barack Obama’s vice president. “We have to move on and finish the job,” Biden said. “Whether you’re covering it through your employer or on your own or not, you all should have a choice to buy into a public option for Medicare.”

Earlier this month, Sanders drew a crowd of several thousand to a weekend rally in a park near the campuses of the University of Pittsburgh and Carnegie Mellon. The event, along with Biden’s, make them the only Democratic presidential candidates to have so far made significant public appearances in Pennsylvania, a perennial swing state which, until Clinton’s defeat, had been carried by the party’s nominee since 1988. The Pennsylvania primary is not scheduled until late April, and candidates have mostly been focused on states that vote or caucus far earlier. In a party eager to take down the president, Biden’s choice of a launch venue suggested an early focus on the general election.

“I came here, Biden said, “because, quite frankly folks, if I’m going to be able to beat Donald Trump in 2020, it’s going to happen here.”