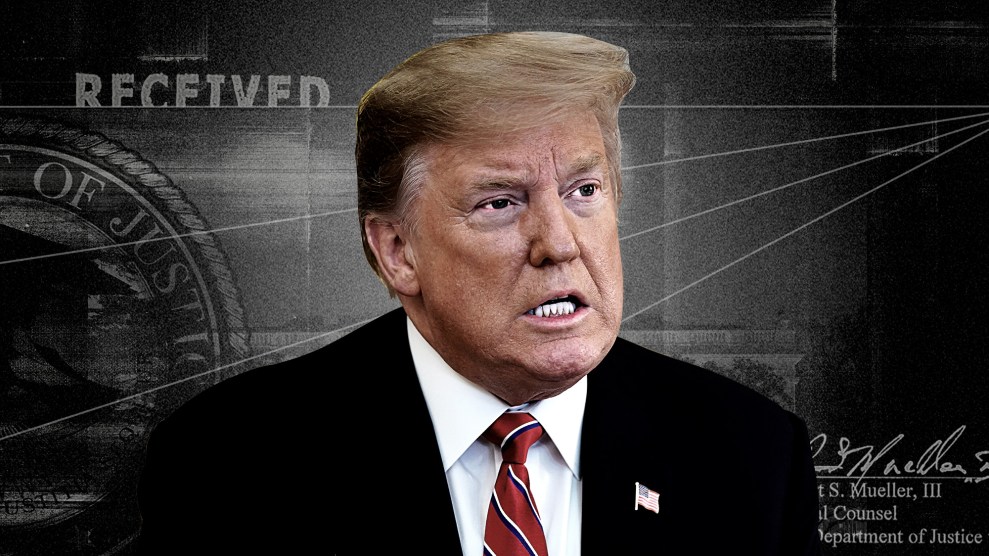 The long-awaited report by special counsel Robert Mueller confirms what we already knew: that Donald Trump and his campaign privately interacted with Russia while Putin’s regime was preparing—and then carrying out—an attack on the 2016 US presidential election; that Russia’s goal (as early as the start of 2016) was to help Trump become president; that Trump and his campaign had good reason to believe Putin’s regime was behind the ongoing assault (but kept insisting Moscow was doing nothing); and that Trump and folks in his orbit have lied about much of this.

Lies, lies, and more lies. They lace this report.

The basics of the Trump-Russia scandal were well established long before Mueller concluded his investigation, because so much of it had taken place in public view—Trump repeatedly echoing Russia’s false claims of innocence, for example. Other elements had been exposed by media reports—including Trump’s pursuit of a secret Moscow project while he was running for president, as well as the June 2016 Trump tower meeting, during which top Trump aides gathered to participate in what they were told was a Moscow plot to help Trump get elected. Numerous lies had already been exposed, including Trump saying he had nothing to do with Russia, and he and Donald Trump Jr. claiming that the Trump tower meeting had only been about adoption policy.

Yet the Mueller report—while, as expected, not revealing any further criminality beyond the indictments already brought during the investigation—reinforces the case that much wrongdoing occurred on the part of Trump and his crew.

Here is just one overview Mueller provides in the report:

During the 2016 campaign, the media raised questions about a possible connection between the Trump Campaign and Russia. The questions intensified after WikiLeaks released politically damaging Democratic Party emails that were reported to have been hacked by Russia. Trump responded to questions about possible connections to Russia by denying any business involvement in Russia—even though the Trump Organization had pursued a business project in Russia as late as June 2016. Trump also expressed skepticism that Russia had hacked the emails at the same time as he and other Campaign advisors privately sought information [redacted] about any further WikiLeaks releases.

Lying and subterfuge—not crimes, but that’s what Mueller accuses Trump of engaging in. And given that this particular redaction probably refers to longtime Trump adviser Roger Stone, whose lying-to-Congress case is still pending, this portion suggests that Trump himself ordered Stone to be in contact with WikiLeaks, while Julian Assange’s outfit was being used by the Russians as part of their covert operation to help Trump. Pause for a moment: A presidential candidate apparently directed a henchman to make contact with—perhaps collaborate with—an ongoing attack on American democracy.

Another page of the report that is full of redactions shows that after WikiLeaks released emails swiped from the Democratic National Committee, Trump was keen on getting information about future WikiLeaks dumps—even as, as Mueller points out, Trump and the campaign were publicly dismissing the notion Moscow was intervening in the election. Trump, at the time, called “this whole thing with Russia” a “total deflection” and said that it was “farfetched” and “ridiculous.”

Trump also proclaimed at that point, “I have nothing to do with Russia.” Yet, according to the report, when his then-fixer Michael Cohen questioned this denial, Trump told him that the potential Moscow tower project had not yet been finalized: “Why mention it if it is not a deal?” Trump said, despite the fact that a letter of intent had already been signed. In other words, Trump was willing to lie about a substantial conflict of interest.

The report also details how Trump helped fashion a public statement—to be issued in the name of Donald Trump Jr.—that falsely described the June 2016 Trump Tower meeting as nothing more than a discussion of adoption policy. Another section of the report describes how Trump tried to force his own White House counsel, Don McGahn, to lie and say that Trump never ordered to him to fire Mueller. (Trump had.) McGahn refused to do so.

Lies, lies, and more lies. They lace this report. And as Mueller notes:

[A]lthough the evidence of contacts between Campaign officials and Russia-affiliated individuals may not have been sufficient to establish or sustain criminal charges, several US persons connected to the Campaign made false statements about those contacts and took other steps to obstruct the Office’s investigation and those of Congress. This office has therefore charged some of those individuals with making false statements and obstructing justice.

But read that carefully. George Papadopoulos, Stone, Cohen, and former National Security Adviser Michael Flynn were each charged with lying. But Mueller is saying that he did not charge all the persons who lied, just “some” of them. (Trump and Trump Jr. refused to be interviewed by the Mueller team.)

The report is full of more information about the curious actions of Trump’s people. Trump campaign chair Paul Manafort—who publicly denied the campaign or he had any Russian connections—is shown colluding with a former business partner who was (according to the FBI) tied to Russian intelligence, discussing a supposed peace plan for Ukraine that would benefit Russia. Manafort was also passing internal campaign information to Oleg Deripaska, a Putin-friendly oligarch, while running Trump’s campaign.

Mueller has demonstrated that the president is a liar.

And it turns out that on May 16, 2016—months before the Russians pushed the button on their election attack—Papadopoulos, a Trump foreign policy adviser, told Australian diplomat Alexander Downer that he had been informed by a Russian cut-out that Moscow could assist the Trump campaign by anonymously releasing information damaging to Clinton. His memory, though, was hazy on whether he shared this news with anyone inside the campaign. (He would tell an Aussie diplomat but none of his colleagues?)

In the summer of that year, Papadopoulos and other Trump campaign aides discussed setting up a meeting in September that would occur with representatives of the “office of Putin.” That is, they considered this outreach to Putin while Putin was attacking the United States. The meeting never occurred. Papadopoulos declined to assist Mueller’s investigators in deciphering his handwritten notes about this potential get-together. He said he could not read his own handwriting. Moreover, Mueller notes that he never was able to get a full explanation of what Carter Page, another Trump foreign policy adviser, was up to when he visited Moscow in July 2016.

Then there’s obstruction. The report is full of details about actions Mueller investigated when trying to ascertain if Trump obstructed justice—and legal experts and commentators will chew over all the details and legal interpretations. But in a concise, one-paragraph conclusion, Mueller notes that “if we had confidence after a thorough investigation of the facts that the President clearly did not commit obstruction of justice, we would so state.” There is no such stating.

Trump defenders and Russiagate skeptics on the left will certainly point to this report and wave the Trump-did-not-conspire-directly-with-the-Russian-government-hack-and-dump-and-social-media-attack flag. But Mueller has demonstrated that the president is a liar. He has shown that Trump and his campaign made it easier for Moscow to pull off its attack on American democracy by asserting there was no attack. He has raised troubling questions about Trump’s adherence (or lack thereof) to the rule of law. He has added details to the known narrative of puzzling interactions between the Trump camp and Russia. He has reminded the public that an election was attacked by a foreign adversary (to help Trump) and that the president has not fully acknowledged that.

Mueller has demonstrated that the Trump-Russia scandal is neither a hoax nor a conspiracy theory. He has not exonerated Trump. He has shown that even if Trump has not committed crimes, the president of the United States is guilty of many serious misdeeds and transgressions.