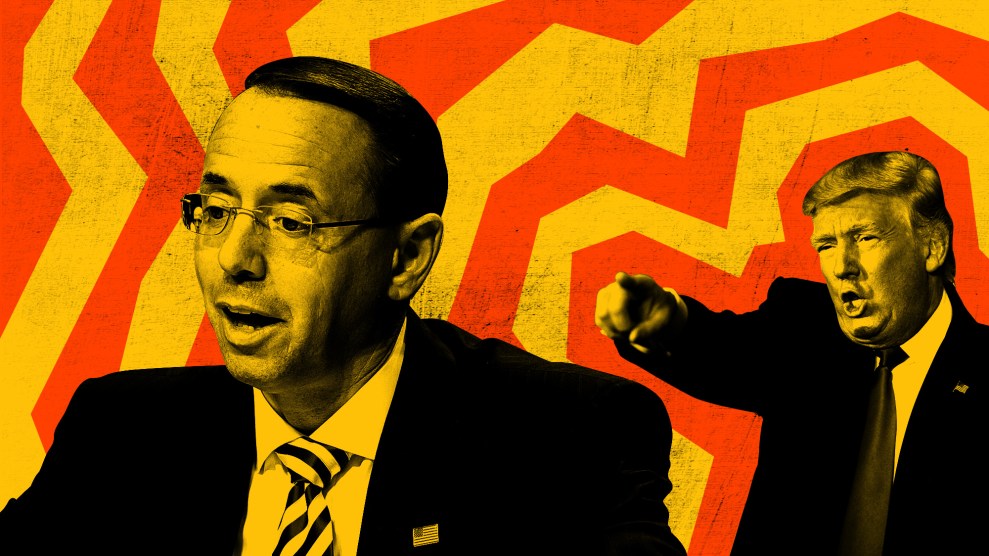 Deputy Attorney General Rod Rosenstein submitted his letter of resignation to President Donald Trump on Monday, capping a contentious two years that culminated in the release of the Mueller report.

Rosenstein will officially leave the Justice Department on May 11, likely after the Senate has confirmed Jeffrey Rosen as his replacement. In the letter, he does not mention the Mueller report, instead focusing on the department’s political neutrality.

“Political considerations may influence policy choices, but neutral principals must drive decisions about individual cases,” he wrote. “We enforce the law without fear or favor because credible evidence is not partisan, and truth is not determined by opinion polls. We ignore fleeting distractions and focus our attention on the things that matter, because a republic that endures is not governed by the news cycle.”

There were many points over the last two years when Trump appeared ready to fire Rosenstein. On one such occasion last year, he reportedly considered firing Rosenstein, only to order instead that special counsel Robert Mueller be fired; he eventually relented on that demand after the White House counsel, Don McGahn, refused to comply with Trump’s directive. Trump is known to demand loyalty, and he has long been suspicious of Rosenstein. Last summer, Trump complained that Rosenstein is “from Baltimore” and that “there are very few Republicans in Baltimore, if any.” In fact, Rosenstein, who served as a US attorney under both George W. Bush and Barack Obama, is a Republican from Philadelphia and resides in the Washington suburb of Bethesda, Maryland.

Rosenstein’s role overseeing the Russia investigation, which Trump has repeatedly described as a “witch hunt,” made him a target of Trump supporters in Congress and conservative cable news pundits. Last year, Republicans on the House Intelligence Committee released a memo compiled by the staff of committee chairman Devin Nunes (R-Calif.) claiming that the Russia investigation was tainted by FBI misconduct. Rosenstein was widely perceived as a target of the memo, which alleged that the FBI had acted in bad faith when it obtained a surveillance warrant for Trump campaign adviser Carter Page in 2016 and noted that Rosenstein later approved an application to extend that warrant. Intelligence Committee Democrats and national security experts refuted the claim that anything improper had occurred.

Republicans began to turn up the heat on Rosenstein in the spring of 2018. That April, Nunes threatened to impeach Rosenstein and FBI Director Christopher Wray if the FBI did not turn over a document used to launch the Russia investigation, which it soon did. Also in April, Rep. Mark Meadows (R-N.C.), who heads the conservative Freedom Caucus, threatened to hold Rosenstein in contempt of Congress or to impeach him if the bureau did not rapidly comply with a subpoena from congressional Republicans for records related to Hillary Clinton, former FBI Deputy Director Andrew McCabe, and the FBI’s use of secret surveillance warrants. (Trump personally ordered that documents related to the Russia investigation be released in September. He subsequently amended his demand to allow the Justice Department’s Office of the Inspector General to first review the documents to prevent harm from releasing classified information.)

Trump reportedly again considered removing Rosenstein last year after FBI agents raided the home, office, and hotel room of Trump’s personal attorney, confidant, and fixer, Michael Cohen, who pleaded guilty to eight criminal charges. The raid, which was personally approved by Rosenstein, according to the New York Times, enraged Trump and set off days of speculation that he might fire Rosenstein or Mueller.

In September, the New York Times reported that the deputy attorney general had discussed mounting an effort to remove Trump from office by invoking the 25th Amendment and had brought up secretly recording the president. Rosenstein denied the report and survived the episode.