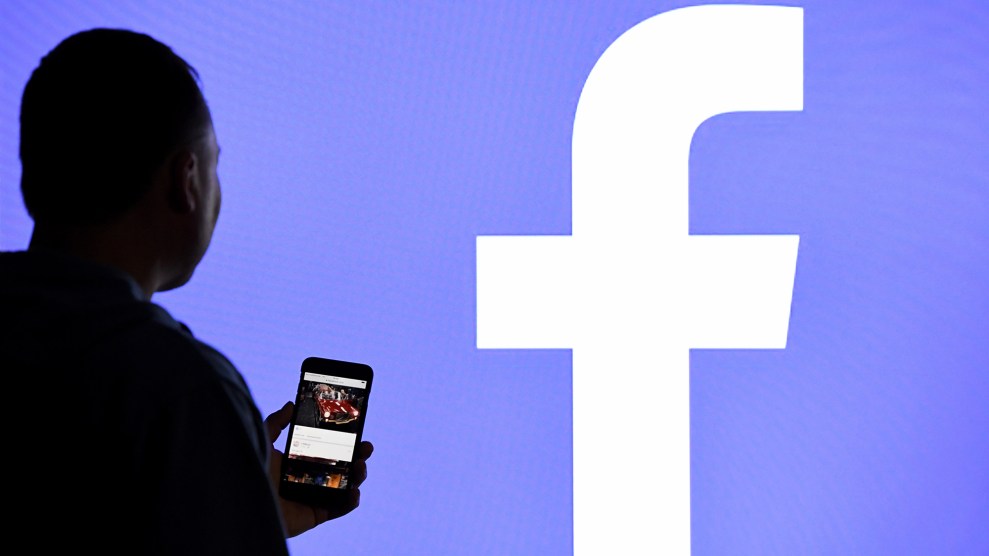 When you visit Facebook, you might see an ad from President Donald Trump’s reelection campaign featuring Cecilia from Pennsylvania, a Democrat who stands with Trump’s decision to build a wall along the southern border. If you’re a man, Cecilia might appear as an attractive young woman in Harry Potter–style glasses. If you’re a woman, she may be more likely to appear as a different young woman in a factory setting. In fine print at the bottom, the ads state: “Actual Testimonial. Actor Portrayal.” But that’s not quite true: Both Cecilia in glasses and Cecilia in the factory come from stock videos at istockphoto.com, respectively categorized as “Smart Adult Beautiful Serious Worker in Glasses” and “Female Engineer Walking Towards Camera in Workshop.”

This is all part of the Trump campaign’s vaunted Facebook advertising operation. Since Trump’s election in 2016, his digital strategist, Brad Parscale, has bragged that he won the election on Facebook, placing more than 50,000 ads each day to micro-target voters on the platform. Today, Parscale is the campaign manager for the president’s 2020 campaign. And thanks to a 2018 policy change at Facebook, its operations on the social media platform are available to watch in real time.

After revelations that Russia had used Facebook to help elect Trump and that the firm Cambridge Analytica had illicitly harvested Facebook data for the Trump campaign, the company sought to win back public trust through greater transparency. So a year ago, Facebook rolled out a database of all political ads on the platform, an ever-growing archive going back to May 2018. The database shows how much each campaign is spending, the number of ads the campaigns have bought, and who sees each ad, broken down by age, gender, and state. This data provides a glimpse into the Trump campaign’s micro-targeting operation, which appears to be throwing a whole lot of approaches—and Cecilias—at the wall to see what sticks.

The Trump campaign has spent far more on Facebook ads than any rival campaign—unsurprising given that the campaign has been around longer and has magnitudes more cash to spend. Still, the numbers tell a story of a campaign investing heavily in Facebook, a platform where it can reach millions of voters and—just as important in this early stage of the race—test the performance of its ads. At the time of writing, the campaign and its associated fundraising committee have spent $11,326,128 on 196,352 ads in just under a year.

That comes to less than $58 per ad. The reason is that different iterations of the same content count as distinct ads. Many of the ads run for just a day and are identical or nearly identical to others. (Reporter Judd Legum, in his newsletter Popular Information, counted 217 ads asking supporters to wish Melania Trump a happy birthday later this month.) That’s precisely the point. Targeting slight variations of ads to different groups allows the campaign to test which Facebook users respond to which messages. That’s why it’s not surprising that most (but not all) iterations of the ad featuring Smart Adult Beautiful Serious Worker in Glasses Cecilia appear to target men, while Female Engineer Walking Towards Camera in Workshop Cecilia appears to be viewed more by women. (The Ad Library’s limited search functions make it difficult to conduct an exhaustive review of the ads and state definitely which are seen more by which groups.)

It’s unclear from Facebook’s database whether there’s much rhyme or reason behind the campaign’s ad strategy on the platform. It is running so many ads at a price of less than $100, garnering fewer than 1,000 views apiece, that it’s unclear whether it’s getting the sample sizes it needs to perform a useful analysis of the data it gets back. In some instances, it’s hard to grasp the reason behind the ad targeting: One iteration of an ad featuring 76-year-old Lisa from Indiana reached only Arkansas men between the ages of 25 and 34.

It’s also not clear how much of the ad targeting is directed by the Trump campaign and how much comes from Facebook’s own algorithms, which show ads to the people most likely to click on them. According to recent research by researchers at the nonprofit tech firm Upturn and computer scientists, Facebook directs ads to different users based on the image in the ad, even when the text and targeting parameters are the same.

Cecilia is far from the only purported Trump supporter—it’s not clear that the testimonials are any more real than the “actors” delivering them—who varies by age and appearance from ad to ad. Melissa, a supposed member of the military from Florida, may be white or Latina. Howard, a black man from New Mexico, may be in his 20s or a senior citizen. Nancy from Nevada is variously elderly and middle aged, while Gloria from California’s iterations include a curly-haired thirtysomething and blonde millennial in a meadow.

While the various Cecilias come from stock photos, in other instances the campaign uses photo ops put on by the White House. Earlier this month, Trump hosted a press conference with people who had been released early from prison due to the sentencing reform bill that Trump signed in November. The press conference generated images of Trump alongside formerly incarcerated African Americans, and the campaign is currently using those images in dozens of ads that tout Trump’s commitment to criminal justice reform and his pledge that “I am fighting for ALL Americans.” These ads appear to be targeted with a clearer strategy in mind. They are shown in key swing states where African American voters will play a key role in choosing the next president, including Georgia, Florida, North Carolina, Pennsylvania, Ohio, and Michigan. Facebook doesn’t reveal whether the Trump campaign is steering these ads toward African Americans on the platform, but if the campaign is as digitally advanced as Parscale claims, it is likely doing so. (Even though Facebook has cracked down on racial targeting of ads for housing, lending, and employment, it still allows political ads to be displayed only to people Facebook has identified as likely to belong to a particular race.)

This week, the Democratic consulting firm Bully Pulpit Interactive analyzed Trump campaign ads from the past few weeks and found that the campaign is spending about 54 percent of its Facebook advertising money on ads that mention immigration. In a sense, it’s unsurprising that the ads would reflect the president’s No. 1 policy issue. But the whole point of micro-targeting on social media is to send specific messages to people who are likely to be swayed by them. Instead of tailoring messages to different populations, the campaign is choosing to reinforce the immigration message that already dominates the president’s strategy.

Bully Pulpit Interactive also found that the campaign is spending 44 percent of its Facebook ad budget on reaching senior citizens. Once again, this appears to be an active effort to shore up the campaign’s most loyal supporters, who skew older. (Democratic candidates, the analysis found, are courting younger voters on the platform.)

Even if the stock images change from one ad to the next, the Trump campaign’s overall message and target audience seem to be staying largely the same.