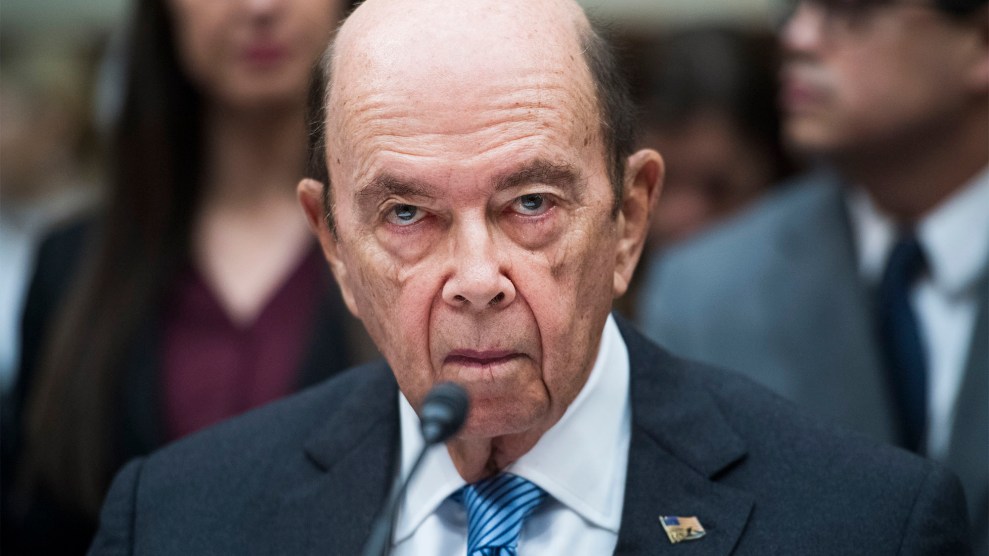 A nine-word question that the Trump administration added to the 2020 census heads to the Supreme Court on Tuesday, with the potential to derail the entire census and shift power to the Republican Party for the next decade.

The administration added the question—“Is this person a citizen of the United States?”—in March 2018, claiming it was needed to better enforce the Voting Rights Act. The decennial census hasn’t had a citizenship question since 1950, and civil rights groups say the question will depress responses from immigrants who worry it could be used to initiate deportation proceedings against them. If large numbers of immigrants don’t respond to the census, the areas where they live could lose representatives in Congress and federal funding, transferring economic and political power to whiter and more Republicans areas. The Census Bureau opposed the addition of the question, saying it could cause as many as 6.5 million people not to respond to the census and increase the cost of conducting the census by millions of dollars.

Three federal courts have ruled against the citizenship question, with one federal judge from California saying it “threatens the very foundation of our democratic system,” but the Supreme Court will have the final say. The court will hear oral arguments on Tuesday, in a case that both sides agree will be one of the most consequential for democracy in decades.

The case stems from a lawsuit filed by Democratic attorneys general from nearly 20 states, led by New York. The consequences are big: The census determines how $880 billion in federal funding is allocated, how much representation states receive, and how political districts are drawn. “Given the stakes, the interest in an accurate count is immense,” Judge Jesse Furman of the Southern District of New York wrote in January in the first ruling striking down the citizenship question. “Even small deviations from an accurate count can have major implications for states, localities, and the people who live in them—indeed, for the country as a whole.”

The administration’s explanation for why it added the question to the census has been repeatedly undermined by evidence and testimony in the case. Commerce Secretary Wilbur Ross, who oversees the Census Bureau, wrote in March 2018 that the citizenship question was needed for “more effective enforcement” of the Voting Rights Act, but voting rights lawyers say that’s patently untrue. Six former heads of the Justice Department’s Civil Rights Division, who served in both Democratic and Republican administrations, filed a brief with the Supreme Court saying the question will “deter Latino and other voters from responding to the census” and thus “undermine enforcement of the Act.” (In a deposition under oath, John Gore, the former assistant attorney general for civil rights in the Justice Department under Trump, agreed with a lawyer for the ACLU that the question was “not necessary” to enforce the Voting Rights Act.)

Ross also told members of Congress he had not discussed the question with White House officials, but he later admitted that he had conversations about it with “senior administration officials,” including anti-immigration hardliners. Then-White House chief strategist Steve Bannon put Ross in touch with Kris Kobach, vice chair of the administration’s voter fraud commission, who told Ross it was “essential” that the citizenship question be added to the 2020 census.

Kobach never mentioned the Voting Rights Act in an email to Ross in July 2017 but wrote that the absence of a citizenship question “leads to the problem that aliens who do not actually ‘reside’ in the United States are still counted for congressional apportionment purposes.” That suggested that a key reason for adding the citizenship question was to allocate political representation on the basis of the number of legal residents in a district or state rather than the total population, a radical change that would significantly diminish political representation for areas with large numbers of immigrants, like New York and California. (Some conservatives groups have taken this a step further by pushing for only citizens to be counted.)

Judge Furman ruled that Ross “violated the law” and “violated the public trust” by adding the question, a conclusion two subsequent federal courts agreed with.

Still, there’s a good chance the Supreme Court could rule in favor of the Trump administration. The conservative majority on the court has consistently endorsed Republican-backed voting restrictions and extreme gerrymanders, issuing decisions in the past decade that gutted the Voting Rights Act, endorsed aggressive voter purging, upheld racial gerrymandering in Texas, and declined to rein in partisan gerrymandering. A decision upholding the citizenship question could have the most lasting impact of them all.