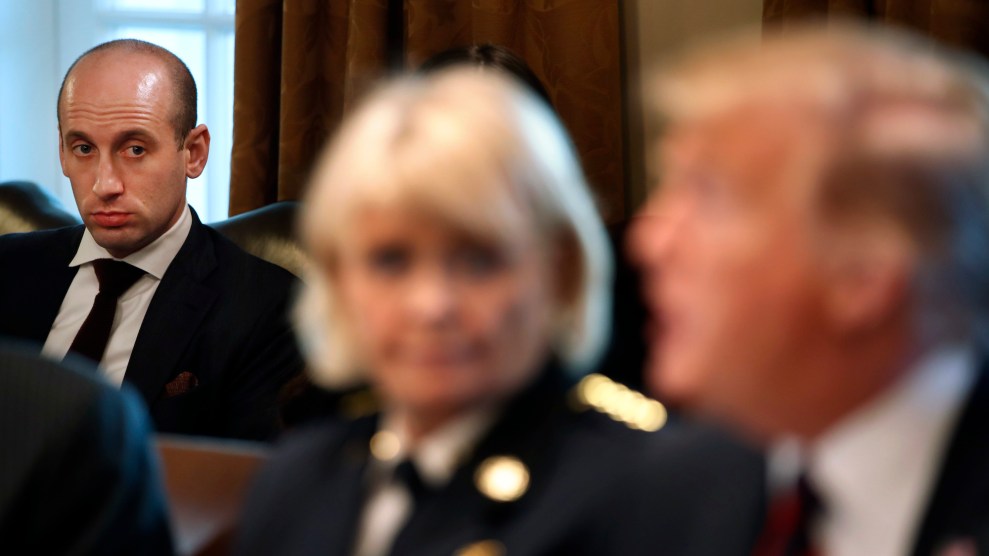 The Department of Homeland Security’s four most important immigration officials are its secretary, the director of Immigration and Customs Enforcement, the head of US Citizenship and Immigration Services, and the commissioner of Customs and Border Protection. Since Friday, President Donald Trump has forced out the first two, moved toward firing the third, and promoted the fourth. The moves, all of which were unexpected, signal a new phase of Trump’s flailing efforts to deter immigrants: Instead of blaming Congress, Mexico, and judges, he is now getting rid of his own people without any coherent plan for how it will help him achieve his goals.

The Washington Post reported last week that Trump has told Stephen Miller, his top immigration adviser, that he is now in charge of all immigration and border policy. With the number of families crossing the southern border at a record high, Miller is deflecting blame away from the White House and onto DHS. On Friday, Miller succeeded in getting Trump to pull his nominee for ICE director, the agency’s acting head, Ronald Vitiello. On Sunday, Trump forced out DHS Secretary Kirstjen Nielsen, whom Miller also disliked, and announced that he would replace her on an acting basis with CBP Commissioner Kevin McAleenan. In the midst of what Trump has declared to be a national emergency at the southern border, the United States will have no permanent leader at DHS, CBP, or ICE. At DHS, ICE, and USCIS, the deputy directors are also serving on a temporary basis.

Now Miller is reportedly pushing Trump to fire Lee Francis Cissna, the head of USCIS, the DHS agency that handles legal immigration. Cissna is a methodical hardliner who is arguably doing a more effective job of keeping immigrants out of the United States than any other Trump official. USCIS is in the process of implementing a rule to deny green cards to immigrants who are likely to use public benefits like Medicare, a move that could reshape the future of legal immigration. What Miller hopes to gain by getting rid of Cissna is unclear. Even the Federation for American Immigration Reform, a Miller ally that seeks to eliminate almost all legal immigration, believes firing Cissna would be a “colossal mistake.” The New York Times reported on Monday that Cissna is expected to leave government soon.

The president is now getting rid of his own people without any coherent plan for how it will help him achieve his goals.

Miller and Trump had no clear endgame in getting rid of Vitiello and Nielsen, either. Nielsen was the face of the administration’s disastrous—and ultimately abandoned—family separation policy. Lacking any influential allies after her mentor, John Kelly, stepped down as White House chief of staff in December, she had little power to push back against Miller. Pulling Vitiello’s nomination made so little sense that some ICE officials and Senate staffers initially thought it was a clerical error, according to the Washington Post. “Ron’s a good man,” Trump said on Friday, “but we’re going in a tougher direction.” Trump did not say what that new approach will look like.

NBC News reported on Monday that Trump has been pushing since January to reinstate a family separation policy. DHS is contemplating a policy called “binary choice,” which would force parents to choose between getting locked up together with their children indefinitely and being separated from their children, who would be released while the parents are placed in adult detention centers. McAleenan hasn’t ruled that out option, according to NBC. CNN reported on Monday that Trump wants an even more aggressive family separation policy than the one implemented last spring. “He just wants to separate families,” a senior administration told the network. Nielsen resisted Trump’s most recent family separation push, according to CNN.

If Trump and Miller were looking to replace Nielsen with someone more unapologetically anti-immigrant, McAleenan is likely to disappoint them. Unlike Trump’s other picks to run CBP and ICE, McAleenan has never been a Border Patrol officer. He majored in political science at Amherst and studied law at the University of Chicago, married a Salvadoran immigrant, and worked at two major law firms before running CBP’s operations at the Los Angeles International Airport. He was appointed deputy commissioner at CBP by the Obama administration in 2014.

McAleenan is respected by colleagues from the Obama administration, who see him as competent, intelligent, and not intensely ideological. “This is a surprise in the sense that this administration likes bluster,” former acting ICE director John Sandweg told BuzzFeed. “That isn’t McAleenan. He is a man of substance.” McAleenan avoids Trump’s race-baiting, and it is almost impossible to imagine him mocking asylum-seekers, as Trump recently did. Still, those differences can obscure McAleenan’s role in Trump’s crackdowns. Last year, McAleenan was one of the three agency heads who signed a memo pushing to Nielsen to adopt a family separation policy. It was Border Patrol agents under McAleenan’s authority who referred parents for prosecution, causing them to be separated from their children.

The White House is reportedly considering Rick Perry, the former Texas governor and current energy secretary, and former Virginia attorney general Ken Cuccinelli to run DHS on a permanent basis. Perry attacked Trump’s approach to immigration in 2015 as “a toxic mix of demagoguery and nonsense.” Cuccinelli’s record would seem to be more in line with Trump’s, but that hasn’t stopped right-wing pundit Ann Coulter from labeling him and Perry “total 100% open borders Republicans.” (Coulter has highlighted Cuccinelli’s support for a procedural move at the 2016 Republican convention that was designed to embarrass Trump.)

Trump has already exhausted most of his options for trying to deter Central American families from seeking protection under US asylum laws; aside from a still-active policy that forces some asylum-seekers to wait in Mexico, he’s either abandoned his policies amid popular outcry or had them blocked in court. Bringing back systematic family separation just as the 2020 campaign is intensifying could be politically disastrous for Republicans. But Trump doesn’t seem to care. He promised his base that he would stop people from coming to the United States and reportedly believes that family separation was the most effective thing he did to achieve that. He and Miller may now be removing any obstacles to bringing it back.