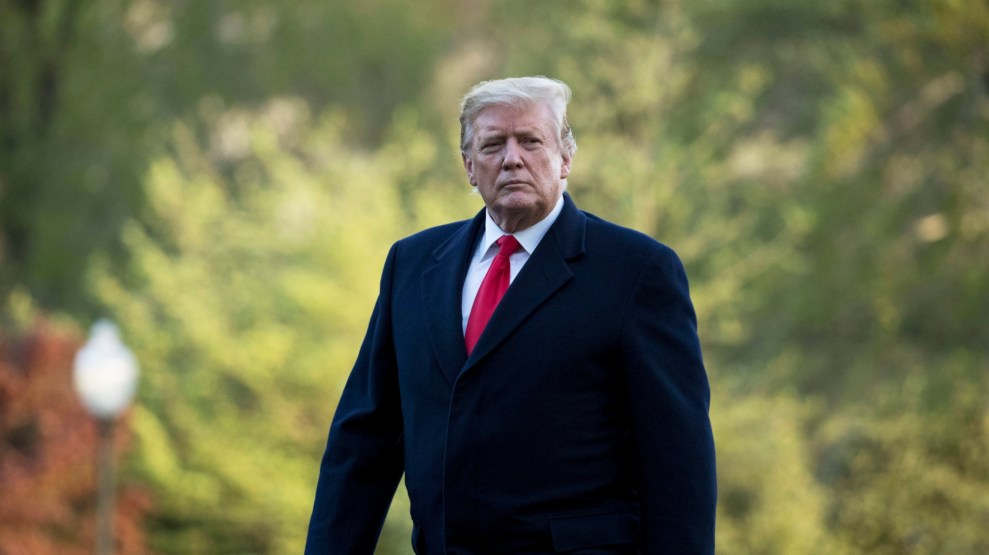 Despite President Donald Trump’s vocal opposition to America’s longstanding wars—”great nations do not fight endless wars,” he said in his State of the Union in February—yesterday he vetoed bipartisan legislation that would have ended US support for the Saudi Arabia-led war in Yemen, a conflict the United Nations says has caused the world’s largest humanitarian crisis. Trump’s second-ever veto strikes down legislation that would have invoked the War Powers Resolution to pull the United States out of a foreign conflict for the first time the resolution was passed in 1973.

“From a president elected on the promise of putting a stop to our endless wars, this veto is a painful missed opportunity,” said Rep. Ro Khanna (D-Calif.) in a statement following the veto. Khanna’s War Powers Resolution passed in the House earlier this month, and a version of which the Senate approved in March. On Monday, Khanna told me that he remained hopeful that the president would sign off on the legislation, or at least agree to a meeting to discuss it, remarking that the measure was “consistent with his view in calling for greater restraint in our foreign policy.” He noted that his bill had the support of some of Trump’s most ardent supporters in Congress, including Reps. Matt Gaetz (R-Fla.), Mark Meadows (R-NC), and Jim Jordan (R-Ohio). Even Breitbart published an article that framed the bill positively and referred to the “push from globalist forces for [Trump] to veto it.”

“My argument to the president is that this war was started in 2015, so he’d be ending a war that began before he assumed office,” Khanna told me. “It’s absolutely historic that we passed the War Powers Resolution in both the House and the Senate for the first time in American history. The president could make history by signing this and be the first president in recent times to limit his own executive power.” Khanna said he thinks Trump’s “instincts” are more in line with his congressional allies in Congress, but that “he’s surrounded by [advisors] who have a much stronger view of the projection of executive power.”

The New York Times reported that National Security Adviser John Bolton and Secretary of State Mike Pompeo opposed the measure. In his veto message to the Senate, Trump pushed back against the congressional effort to tie his hands, writing, “This resolution is an unnecessary, dangerous attempt to weaken my constitutional authorities, endangering the lives of American citizens and brave service members, both today and in the future.”

The president’s comments earned praise from the foreign minister of the United Arab Emirates, a main Saudi ally in Yemen. On Twitter, he wrote, “President Trump’s assertion of support to the Arab Coalition in Yemen is a positive signal of US resolve towards America’s allies,Common strategic interests are best served with this clear commitment.”

The four-year-old war has caused tens of thousands of civilian deaths and left 24 million people—80 percent of the country’s population—in need of assistance. The country remains on the brink of famine, and one million people are suffering from a cholera outbreak. While the war has largely been defined by the Saudi-led coalition’s indiscriminate bombings and an aid and food blockade, the United States has supported Saudi Arabia with intelligence sharing, arms and ammunition, and until late last year, midair refueling for its planes.

Despite Trump’s veto, Khanna said the passage of a War Powers Resolution—spearheaded by him and Sens. Bernie Sanders (I-Vt.) and Mike Lee (R-Utah) in the Senate—“sends a clear signal to the Saudis that they need to lift their blockade and allow humanitarian assistance into Yemen if they care about their relationship with Congress.”

“I am confident that this is a nation that is wary of war, that understands we have made a strategic blunder by being involved in as many wars overseas as we have,” Khanna said on Monday, noting the possibility of a veto. “There is a bipartisan emerging coalition that says enough with these bad, unstrategic wars, let’s build our capabilities here at home. On that issue, I think you can get broad consensus.”