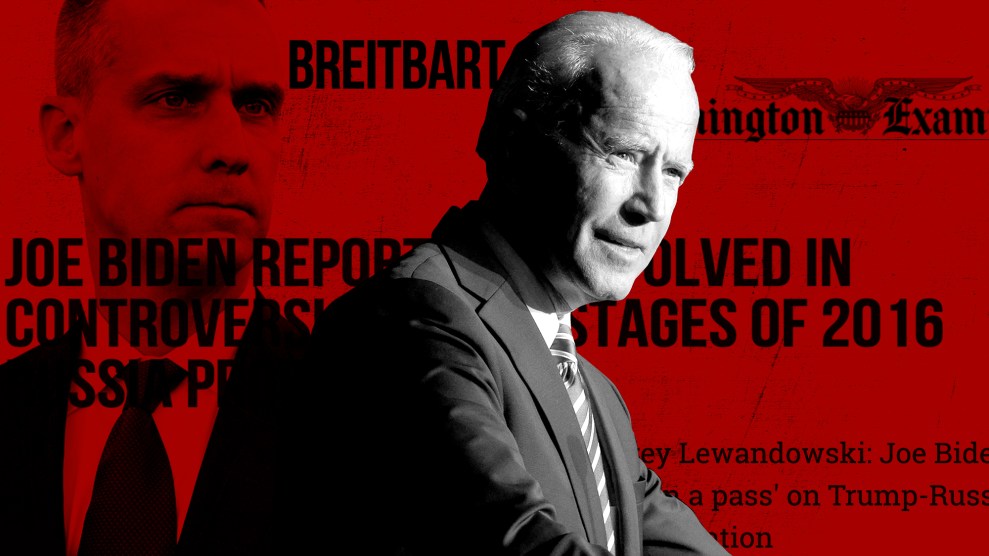 That didn’t take long. Joe Biden had barely joined the 2020 presidential race when the right-wing disinformation machine began cranking out the newest iteration of its Deep State conspiracy theory, with this version claiming the former vice president was part of a government cabal that cooked up a supposedly phony Trump-Russia scandal to keep the reality television celebrity from gaining the White House. This certainly is an easy charge to debunk—that is, if you care about facts—but it’s still likely that this unfounded notion will take hold in the fever swamp of Trump-encouraged and Fox-fueled conservative paranoia.

Days after Biden declared his presidential bid in late April, Restoration PAC, a conservative political action committee generously funded by a Republican billionaire, posted on Facebook a video titled “Joe Biden’s Involvement in the Fusion GPS/Steele Dossier.” For right-wingers, any Biden connection to this document would mean that the Democratic 2020 frontrunner was in the middle of the plot against Donald Trump, for the theory pushed by Fox Newsers and others holds that the memos written by former British intelligence officer Christopher Steele during the 2016 campaign—which alleged Trump was directly in cahoots with Moscow—triggered the FBI’s Trump-Russia probe that morphed into special counsel Robert Mueller’s investigation in 2017. The basic foundation of this conspiracy theory, though, is wrong: The FBI’s inquiry began in late July 2016 not because of the Steele memos but due to the US government receiving information from another government (the Australians) that a Trump campaign foreign policy adviser, George Papadopoulos, had been privately told that Russia had dirt on Hillary Clinton—a trove of emails—that could be used against the Democratic candidate. (Want a source for this? See the last page of the infamous Nunes memo.)

Still, conspiracy theorists of the right—led by Sean Hannity—continue to insist the Steele memos were concocted to kick-start an FBI investigation that would crush Trump (before Election Day or after it—the conspiracizing gets hazy at times). So tying Biden to Steele’s work is a way to implicate the ex-veep in the purported Deep State attack on Trump. And that’s red meat for Trumpers.

The error-filled video disseminated by Restoration PAC is introduced with a bold caption—”Let’s not forget how [Biden] helped spread the Russian collusion lies!”—and claims that the Trump-Russia investigation was nothing other than the “Washington swamp’s effort to overturn the results of the 2016 election.” So what role did Biden play in this? The video points to a “secret” meeting in the White House in January 2017 with outgoing President Barack Obama, FBI Director Jim Comey, National Security Adviser Susan Rice, Deputy Attorney General Sally Yates, and Biden. The video, shot in a shadowy animation style with ominous music, does not state what transpired at this get-together, but presumably it had something nefarious to do with the Steele memos, which would soon be published by BuzzFeed News. But there’s nothing here to implicate Biden or anyone else in an anti-Trump coup. Nevertheless, the point is clear: Biden somehow was in on it. Whatever it was.

This lazy attempt to rope Biden into the dark forces that allegedly conspired against Trump would be easy to dismiss, except Restoration PAC is an outfit with plenty of resources. It has mostly been a vehicle for Richard “Dick” Uihlein, the CEO of shipping and industrial supplies company Uline, to funnel millions of dollars into the coffers of Republican political candidates. In 2018, Uihlein donated $37 million to super PACs supporting Republicans running for the House and Senate (making Uihlein the fourth largest super PAC donor in the nation), and Restoration PAC received over $8 million of that. During the 2016 Republican presidential primary, Uihlein supported the bids of Wisconsin Gov. Scott Walker and then Sen. Ted Cruz. But he later donated to a pro-Trump super PAC and after the election dumped $500,000 into the Trump inauguration committee. With deep pockets filled with Uihlein cash, Restoration PAC—which now targets pro-choice Democrats as “the party of death” and pushes for Trump’s border wall—is well-poised to inject misleading information into the 2020 race.

In recent days, the bogus Biden-Steele connection has been hyped by other right-wing media. On May 23, Corey Lewandowski, the former Trump campaign manager, appeared on Fox Business Network and, after calling the Trump-Russia investigation a “distraction,” suggested that Biden had helped orchestrate this so-called hoax:

The person who has gotten a pass on this so far is Joe Biden, because I believe that the investigation, which was launched, came from somewhere inside the White House to green light Clapper, Comey, and Brennan to start this investigation into Donald Trump for no valid reason…It came from the highest levels of the government. And Joe Biden has not answered what he knew and when he knew it of how this investigation began.

Again, there is no mystery about how the inquiry was launched. The US intelligence community became concerned in the middle of 2016 about both Russian intervention in the election and Russian interactions with the Trump campaign—after Russia hackers attacked Democratic targets and stolen emails were publicly released to hurt the Clinton campaign—and it initiated a probe that proceeded cautiously. (These Deep Staters, who supposedly wanted to crush Trump, leaked nothing about the investigation!) Yet Lewandowski was pushing the canard that the investigation was fabricated by the Obama White House and expanding this unsubstantiated notion to tar Biden as a co-conspirator. (The conservative Washington Examiner dutifully reported Lewandowski’s remarks on Biden as news.)

Coincidentally—or not—Breitbart jumped into the fray the next morning with an article headlined “Joe Biden Reportedly Involved in Controversial Early Stages of 2016 Russia Probe.” What was the big scoop? That in 2017 the Washington Post reported that Biden had taken part in White House meetings about Russia’s attack on the 2016 election. Yes, really. That’s it. The vice president was indeed part of the small group of Obama administration officials who held a series of meetings in the summer of that year, as the Post put it, “to weigh the mounting evidence of Russian interference and generate options for how to respond.”

How could this be scandalous or controversial? Referring to the “Russia interference investigation,” Breitbart breathlessly explained, “Part of the efforts eventually involved unsubstantiated and ultimately discredited charges made by the Christopher Steele dossier that Trump campaign officials were colluding with Russia.” These meetings, however, were not sparked by the Steele memos. They were focused on what was becoming increasingly clear to US intelligence and the Obama White House: Russia was waging information warfare against American democracy to screw with a presidential election. Conflating these sessions with the Steele dossier is ludicrous. Yet the goal seems to be to do whatever it takes to link Biden to Trump’s favorite conspiracy theory.

A pro-Republican super-PAC, Lewandowski, Fox Business Network, the Washington Examine, Breitbart—you can see the conservative transmission belt in play, as they all work to gin up a sham story about Biden. This is how disinformation often operates. Toss out unconfirmed or false assertions and get others to cite and repeat them. Make unsubstantiated and fact-free connections and hope the impression sticks. Trump mouthpiece Rudy Giuliani recently tried to whip up a scandal about Biden and Ukraine—and appears to have failed. But Trump and his henchmen have had some success at manufacturing diversions to draw attention from the Trump-Russia scandal and to create fake controversies centered on Deep State machinations and purported spying on Trump. Now with Biden leading the Democratic pack, they want to draw the former vice president into their dark and sketchy fantasies. And what’s next? The Wall Street Journal‘s editorial page? Hannity? QAnon? Congressional hearings? A Trump tweet? This may be a small brush fire at the moment, but the disinformation artists of the right will surely do what they can so that it blazes on.