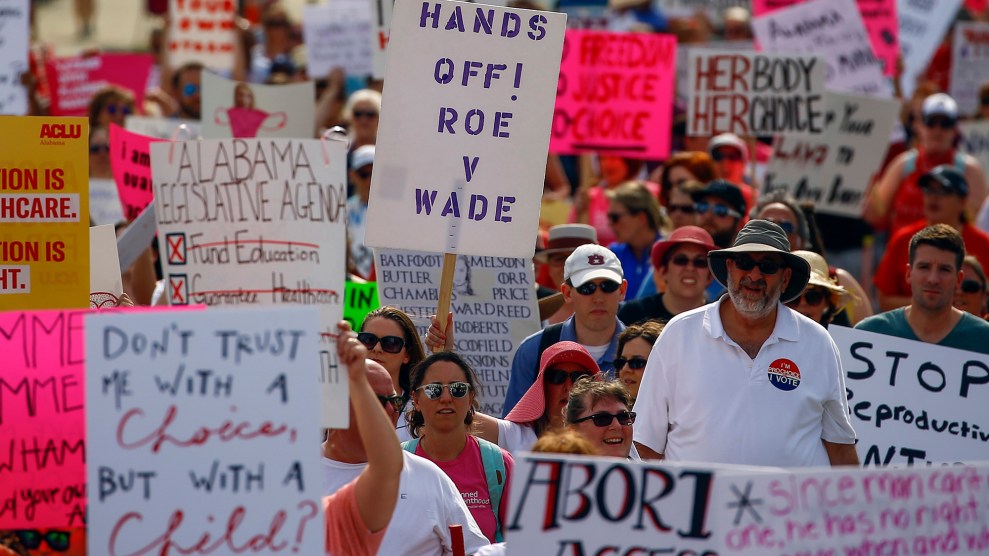 A month ago, Amanda Reyes was working in relative obscurity, trying to protect women’s reproductive rights in a state that was always hostile to them and was becoming increasingly more so. Then, Alabama’s assault on abortion rights reached a new height last week, as Gov. Kay Ivey signed the most restrictive abortion ban in the country. Now Reyes, the 30-year-old president of the Yellowhammer Fund, is dealing with a barrage of attention and donations—with press calls coming from as far away as Sweden and Spain; celebrities like singer Maggie Rogers and politicians like Sen. Bernie Sanders urging their supporters and followers to raise money for the group; and Portland Trail Blazers fans even pledging to donate $1 for every point the team scored during a NBA conference finals game.

All the attention is already paying huge dividends: The Yellowhammer Fund is on track to help fund three times as many abortions as last year.

“I am floored, I am literally speechless,” Reyes tells Mother Jones. “I am a very positive person, but I would never have anticipated that…. Because we tried to work so hard for years to get anyone to engage with us.”

“I am floored…. We tried to work so hard for years to get anyone to engage with us.”

The Yellowhammer Fund is one of many grassroots abortion funds across the country that help low-income women pay for abortions and plan the logistics. They have popped up in the past few decades, since Roe v. Wade secured a woman’s right to abortion in 1973 and states have subsequently worked to restrict access to the procedure and financially cripple clinics. In the state of Alabama, there are now only three abortion clinics, and in neighboring Mississippi there is only one. At last count, six states in the US, in fact, had only one clinic. So local abortion funds often work together, since many of the women they help might need to cross state lines to get to the closest abortion clinic; over 70 funds, including the Yellowhammer Fund, are part of the National Network of Abortion Funds, which helps coordinate financial support and collaboration among local outfits.

These funds have gotten more attention as conservatives have ratcheted up their attacks on abortion over this past year. 2019 has seen an unprecedented number of extreme abortion restrictions introduced in and pushed through statehouses—an aggressive effort to undermine or overturn Roe in the face of a Brett Kavanaugh-confirmed Supreme Court. In the span of a week, Alabama passed its ban, Georgia passed a law outlawing abortions after six weeks, and Missouri’s eight-week ban was sent to the governor’s desk for signature. In response, people wanting to have an immediate impact are turning to local groups supporting women—including abortion funds like Yellowhammer Fund and Access Reproductive Care-Southeast, as well as providers like Planned Parenthood. Spontaneous social media campaigns are bringing in tens of thousands of dollars at a time, though much of the money raised has come through small donations. In the two days after Alabama lawmakers passed the ban, the National Network of Abortion Funds raised over $260,000.

It was just three years ago that Reyes and some friends were working as escorts at an abortion clinic in Tuscaloosa, and the idea of creating an abortion fund was a pie-in-the-sky dream. During the 2016 presidential race, they noticed radical rhetoric ratcheting up and a big uptick in anti-abortion protesters at the clinic and across the country. Then Trump won, pushing Reyes and her group of friends to actually turn their aspiration into a reality. In January 2018, they funded their first procedure.

Then Trump won, pushing Reyes and her group of friends to actually turn their aspiration for an abortion fund into a reality. In January 2018, they funded their first procedure.

In addition to providing money for the procedure itself, the Yellowhammer Fund helps women with planning for it and paying for travel and lodging, which can be huge barriers. They also walk confused and overburdened people through the complex legal restrictions around the procedure, like the complicated process required for parents to give consent for a minor’s abortion.

In total, the group helped fund 314 abortions last year. In Alabama, abortions cost around $500 in the first trimester and $700 to $2,100 after that. Due to budgetary limitations—their budget was less than $85,000 last year—they’ve only been able to focus on second trimester procedures. But because of the recent influx in donations, the Yellowhammer Fund will be able to fund at least 1,000 procedures in 2019.

The fund also now plans to launch what Reyes calls a “reproductive justice center,” which will provide condoms, menstrual products, emergency contraception, diapers, formula, baby clothes, and other resources to prevent pregnancy or to help women support the children they have. Reyes says it’s their response to crisis pregnancy centers, which are nonprofits commonly set up near abortion clinics and are aimed at counseling women against the procedure. They are often religious and have been known to provide false medical information.

It hasn’t been easy to keep the fund afloat over the past two years. Unlike Planned Parenthood, for instance, which provides many other services like pap smears and STI testing, the Yellowhammer Fund focuses solely on abortion, specifically helping women who can’t afford the procedure. It can be difficult and expensive to reach and support the individuals most in need, but these organizations play a particularly crucial role in states like Alabama where women have less state-funded support. Broadly, the women who need help are disproportionately poor women of color—the same women who bear the brunt of abortion restrictions. In Alabama, there are few resources for mothers living in poverty. It has one of the lowest rankings for quality of health care and is one of the 14 states that has refused to expand Medicaid, meaning it is a real challenge for poor women to access care. Notably, the state has a high infant and maternal mortality rate, the latter of which has risen 21 percent since 2016.

Working with the most marginalized communities on the biggest lightning rod issue, especially in the South, has meant that Yellowhammer Fund has had to fight for visibility. “Getting a platform is really hard for us. We’re a local grassroots organization that mostly focuses on mutual aid,” Reyes says. “We don’t do a lot of things that people really see as press-worthy. It’s not sexy. It can be really boring, really frustrating, really sad and demoralizing work.”

“We don’t do a lot of things that people really see as press-worthy. It’s not sexy. It can be really boring, really frustrating, really sad and demoralizing work.”

Locally, even more progressive politicians and public figures who are pro-choice have tended to steer clear of groups like the Yellowhammer Fund. For instance, during Alabama’s 2017 special-election Senate race between now-Democratic Sen. Doug Jones and Republican Roy Moore, Reyes and others in her group consistently appealed to Jones, who is pro-choice, on social media, asking him to directly confront Moore, who is staunchly anti-choice, on the importance of abortion rights. But they had little success. (Sen. Jones recently called the new abortion ban “shameful.”) And when Alabama voters last fall were considering Amendment 2, a trigger ban that would make abortion illegal if Roe were overturned, the Yellowhammer Fund asked then-candidates if they would include a few questions in their phone banking about the amendment to help jumpstart conversation about the issue. Only one candidate, Will Benton, agreed. Amendment 2 later passed, and Benton lost his race for the Alabama House of Representatives to state Rep. Rich Wingo, a supporter of the state’s recent ban.

Reyes argues that the reluctance of even friendly politicians to speak directly about the issue has created a major opening for anti-abortion activists’ success. “The reason that we’re in this situation right now is because we refuse to talk about it,” she says. And ceding morality on the issue to conservatives by talking about abortion like a regrettable but “necessary evil” or adopting opponents’ language like “pro-life,” she adds, dangerously perpetuates the stigma around abortion.

“But I think that maybe now that we’re here, it might not be too late,” she adds.

“The language for so long has been that the way we make change is electorally and legally through the court system,” Reyes says. But “the kind of response that we have seen so far is making me really hopeful that people are really seeing that there are multiple ways that you have to fight this.”

None of the recent extreme abortion restrictions or bans are yet in force, either due to legal challenges or later enactment dates, and all remain currently unconstitutional under Roe. But while the political and legal battles play out, women seeking abortions are caught in limbo. Along with the Yellowhammer Fund’s flood of recent support has come waves of confused and scared callers. As the Alabama abortion ban moved through the statehouse, the Yellowhammer Fund’s phones were ringing constantly with women scared that they’d no longer be able to get the procedure they’d been saving up for or already scheduled. So, for now, getting women the information and support they need is where the Yellowhammer Fund’s focus lies. As their Twitter page currently announces: “YOU CAN STILL GET AN ABORTION IN ALABAMA!”