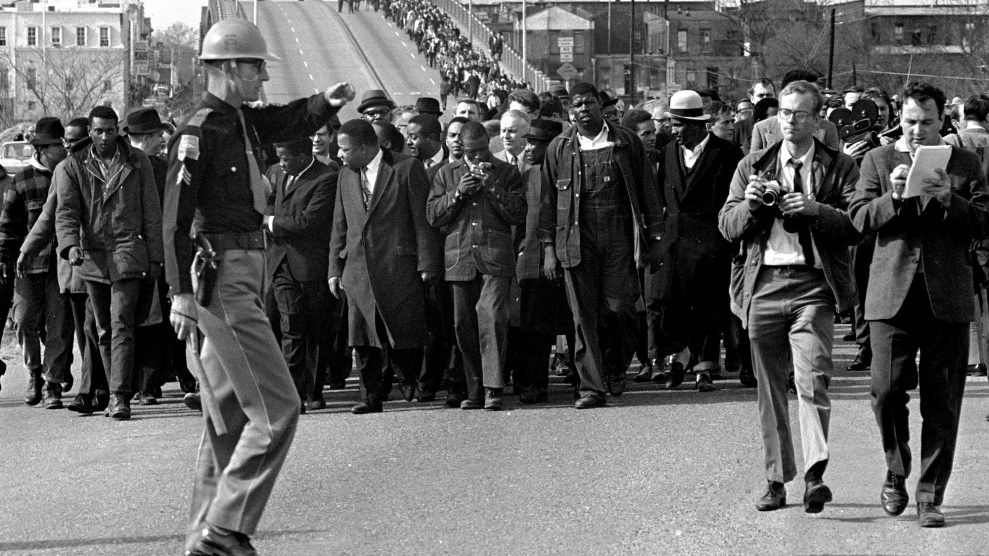 Demonstrators, including Dr. Martin Luther King, Jr., stream over an Alabama River bridge at the city limits of Selma, Ala.AP

This story was first published by ProPublica.

The exuberant greeter, who said her name was Wanda, hugged each of the secretaries of state as they walked through the doors of Dexter Avenue Baptist Church. “Thank you for being here,” she said as each crossed into the small, orange-brick building.

It was, she said, “hallowed ground.” Martin Luther King Jr. had preached here for six years and organized the Montgomery bus boycott in the church’s basement. The church is only feet away from the Alabama State Capitol, on whose steps Jefferson Davis was sworn in as president of the confederacy. At the end of Dexter Avenue is the Court Square Fountain, once the site of a slave trade.

Wanda greeted those arriving on the second day of the “Democracy Tour” organized by Michigan Secretary of State Jocelyn Benson and Alabama Secretary of State John Merrill — a three-day visit to Alabama’s most historically significant civil rights monuments and museums for the chief election administrators of 18 states. It was the first time election administrators had done such a tour, and they made clear to note there were 11 Republicans and seven Democrats in attendance.

The event had provoked a fair degree of online anger. Some people demanded to know why more secretaries of state were not in attendance. Others criticized certain officials for being there at all, citing the controversial voting requirements enforced in their states. What struck many as an awkward juxtaposition was made all the more striking when the secretaries of state joined hands and, at Wanda’s enthusiastic insistence, sang “We Shall Overcome.”

“Come on!” she shouted, commanding them to sway first to the left.

They sang, swaying as instructed:

Maine Secretary of State Matt Dunlap, a Democrat, was asked about the scene and the array of those in attendance.

“People are going to have to figure out how to justify their own feelings,” Dunlap said.

The organizers said the event, at its core, was meant to be an immersive historical experience. Neither the organizers nor the speakers made overt connections to present-day issues of alleged voter suppression or fraud. Instead, they tried to simply take in the facts of the civil rights movement. Graphic photos of lynching victims were displayed. Scholars of history and victims of violence spoke, and Mary Liuzzo Lilleboe — the daughter of Viola Liuzzo, the civil rights activist who’d driven from Detroit to march in Selma, Alabama — attended the full trip alongside the secretaries.

He walked away when asked about student voting issues, only offering: “New Hampshire is the easiest state to vote in.”

The event’s last stop was on Highway 80’s mile marker 111, where Liuzzo and passengers in her Oldsmobile were shot and killed by members of the Ku Klux Klan.

Among the secretaries of state in attendance who are currently enmeshed in controversy over voting rights was New Hampshire’s, Bill Gardner, a Democrat. In July, a New Hampshire law will go into effect that will prevent voters from casting a ballot unless they pay to register their cars in the state and get a New Hampshire ID. Gardner, who supported the bill, saw dozens of students, crossed legs and clasped hands, stage a sit-in inside of his office the very week of his visit to Alabama. Ten students were arrested.

Gardner was hesitant to be interviewed about the event, criticizing ProPublica’s coverage of President Donald Trump’s now-disbanded voter fraud commission, of which he was a member. ProPublica, for example, reported on the commission’s potentially illegal use of personal email and flawed plan to find ineligible voters on the rolls. He walked away when asked about student voting issues, only offering: “New Hampshire is the easiest state to vote in.”

Georgia Secretary of State Brad Raffensperger, a Republican, was also in attendance. He took office this year when the former secretary, Brian Kemp, won the governorship in an election fraught with claims of racially motivated voter suppression. Court battles in the state are still raging, and Democrats in the U.S. House of Representatives are investigating whether polling places last fall were either moved or closed inappropriately. “There’s no truth to it,” Raffensperger said of any suggestion of voter suppression.

Raffensperger said he was happy to be on the tour and had found it moving. He said he was “very grateful for the change in the South — it’s moved our country forward.” But the violence and discrimination activists such as Martin Luther King Jr. had fought against were gone, he said, citing record turnout and registration. “Those barriers, if they were ever there, obviously they’re not there in Georgia today.”

Others saw more obvious connections to the present.

Louisiana’s Kyle Ardoin, a Republican, seemed genuinely affected by the tour. While others politely chatted, he was often silent as he considered what was before him. Louisiana’s Legislature is today racked by a debate over voter registration matters, and Ardoin said the history of the struggle for the vote, and specifically registration, wasn’t something he’d previously understood.

“I now have the perspective of both sides,” he said.

Kansas Secretary of State Scott Schwab, a Republican, was also there. He took over from Kris Kobach, who oversaw the implementation of some of the state’s most stringent voting policies only to lose in court over what a judge ruled were exaggerated accusations of voter fraud. Schwab has been moving slowly away from Kobach’s approach since taking office, relinquishing the office’s ability to prosecute voting crimes and opening dialogue with local civil rights groups.

“I was not there to lecture them about their individual states’ voting rights, but rather to remind them of the sacred ground that they were sitting in.”

“We’re not pushing policy, so hopefully that relieves some of the pressure on those who think we are trying to push voter suppression,” he said. He added that the trip helped him grasp the historical implications of his new role, which he sees as administrative — a far cry from his predecessor’s view. “It gave me a historical pinpoint where I can go back and say: ‘Here’s why we do what we do. Here’s why we give access. Here’s why we make it simple to vote,’” he said. Schwab said he’ll be processing the experience, and what it means for his outlook on policy, for a long time to come.

Rep. Terri Sewell, a Democrat who represents Selma and the surrounding area in Congress, spoke at her home church, the Brown Chapel AME Church in Selma, which was used as a base before the historic march across the Edmund Pettus Bridge five decades ago.

Sewell is the only Democratic representative from Alabama and is the sponsor of the Voting Rights Advancement Act, which would restore a provision of the Voting Rights Act struck down by the Supreme Court in 2013. It would re-create a process to determine which states and localities must pre-clear elections laws with the federal government.

“I was not there to lecture them about their individual states’ voting rights, but rather to remind them of the sacred ground that they were sitting in,” she said. “Do I hope that they find true inspiration in their own walks and about their own states’ requirements for voting? Yes.”

Benson, a Democrat from Michigan, has led these tours before, though not for election officials. She worked in Montgomery for the Southern Poverty Law Center, researching hate crimes, when she first experienced the tour for herself. She’s taken students from Wayne State Law School, where she was once dean, in hopes they’d become voting rights attorneys, and even players from the NFL who she hoped would use their platforms to advocate for voting rights.

While her previous trips may have been focused on modern voting rights advocacy, she said this trip was not intended to force secretaries to reckon with warring accusations of suppression and fraud. “We have a history that’s common to all of the work that we do, and let’s learn about it through the eyes of those that lived it. That was it,” she said. But the experience of seeing these things firsthand, she said, “can’t help but change or impact how [the secretaries] view their roles, as continuing on the work of those who came before them.”

Merrill, a Republican who helped Benson — a new secretary — organize the tour, agreed. Merrill has been secretary in Alabama since 2015 and lamented the recent loss of the ability for elected officials from both parties to come together and learn without suspicions of deception. “We have a difference of opinion on some [voting] issues, but we aren’t fighting each other,” he said. The secretaries coming together to learn about this history, without hostility and in good faith, inspired him.

Nellie Gorbea, the Democratic secretary of state in Rhode Island, felt the tour provided necessary time for the secretaries to mull over these issues. “I had expected more of an opportunity to have conversations [about modern voting policy] among the secretaries … but I found myself having some of those conversations on my own,” she said, adding that she believes that it will continue to come up as the secretaries meet privately in the future. “The U.S. is a big country, and I think that one of the challenges we have is understanding the other’s perspective in ways that bring us to points of consensus, and having shared experiences is crucial to get there.”

On the final day of the trip, the secretaries’ bus stopped at the foot of the Edmund Pettus Bridge. They’d retrace the steps of the civil rights marchers whose brutal assault in March 1965 helped lead to the Voting Rights Act. The light rain had stopped, and Selma police, who snapped their own pictures of the scene, had closed off the bridge.

The procession began quickly but slowed. Ardoin walked arm in arm with Liuzzo Lilleboe, and while some chatted among themselves, others silently processed, taking in the scene. Just before the apex of the bridge, Benson stopped the secretaries to remind them of what had awaited the marchers on the other side, and they continued.