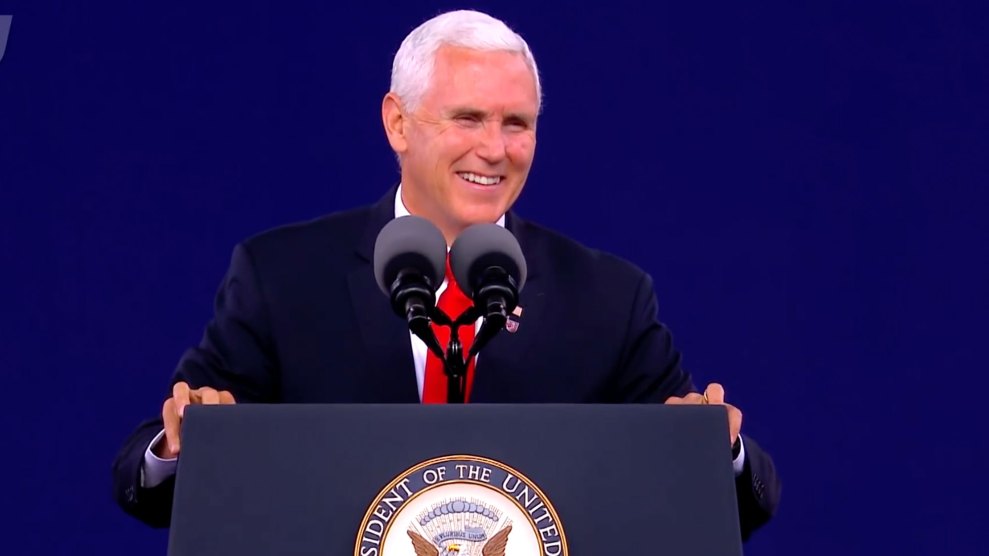 Vice President Mike Pence, in a commencement speech on Saturday, told the graduating class at Liberty University that they were about to enter a world where they “need to be prepared to meet opposition” for being Christian.

“Some of the loudest voices for tolerance today have little tolerance for traditional Christian beliefs,” Pence said, calling himself “a brother in Christ.” “As you go about your daily life, be ready.”

According USA Today, during his address in Lynchburg, Virginia, the vice president cautioned students that they’d be asked to not just tolerate things that violate their faith, but to endorse them.

“Throughout most of American history, it’s been pretty easy to call yourself Christian,” Pence said. “It didn’t even occur to people that you might be shunned or ridiculed for defending the teachings of the Bible. But things are different now.”

Pence spoke about how it’s become “fashionable” to attack people of faith—referencing recent criticism of his wife, Karen, for returning to teach at a private Christian school, saying they “faced harsh attacks by the media and the secular left.” The school does not allow gay students and requires employees to affirm that marriage should only be between a man and a woman. He also hit on the abortion ban signed into law this week in Georgia, lamenting that “a bevy of Hollywood liberals said they would boycott the entire state.”

The speech comes after a long week for Liberty University president Jerry Falwell Jr. Just a few days ago, Reuters revealed that before Falwell endorsed then-candidate Donald Trump, the president’s former lawyer and fixer, Michael Cohen, helped Falwell prevent “racy” photos from becoming public. (For more, in light of the report, my colleague Abigail Weinberg reviewed all the times Falwell served as a booster for Trump on Twitter and in interviews during the 2016 campaign.)

USA Today also reports that Pence has been invited to give another commencement speech at Taylor University, a Christian school, but the students there seem to have more mixed feelings than Liberty’s. More than 12,000 people have signed a petition to cancel Pence’s appearance, including students, staff, and alumni.