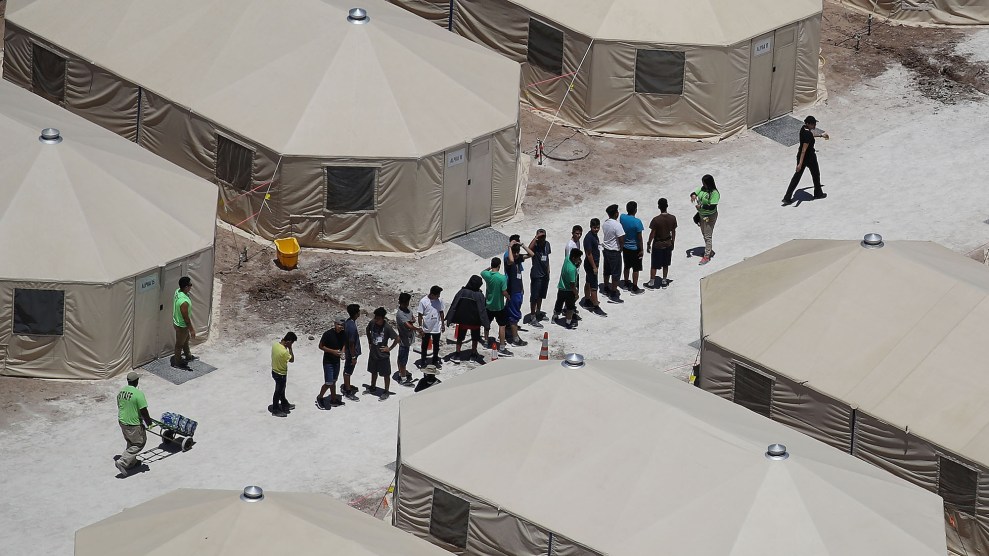 Children and workers at a now closed Health and Human Services tent encampment in Tornillo, Texas, in June.Joe Raedle/Getty

Even the Trump administration agrees that children who arrive at the border alone should live with parents or relatives in the United States while their immigration cases are decided rather than stay in government shelters. Department of Health and Human Services assistant secretary Lynn Johnson put it bluntly in an interview with National Public Radio last year: “The government makes lousy parents.”

Yet last May, after Immigration and Customs Enforcement officers shifted tactics, the number of kids in the government’s custody quickly climbed to a record high of more than 14,000. And now, as children remain in shelters that contract with HHS for far more time than they used to, the Trump administration is asking Congress to provide emergency funding so that it can shelter up to 23,600 migrant children at a time.

On Wednesday, the Trump administration requested $4.5 billion of emergency funding to address what it called an “immediate humanitarian crisis” at the southern border. Nearly two-thirds of that money—$2.88 billion—would go to sheltering children who cross the border without their parents. Unlike single adults and families whom the Department of Homeland Security is responsible for, unaccompanied children must be transferred to HHS’s Office of Refugee Resettlement. (ORR is not an immigration enforcement agency and is tasked with protecting children’s welfare.)

The administration is also requesting an additional $341 million so that Immigration and Customs Enforcement can detain more adults and families. The request comes less than three months after Congress told ICE to significantly cut the number of immigrants it detains.

Evelyn Stauffer, an HHS spokeswoman, said in a statement that the emergency funding is needed to address a “dramatic spike” in the number of children being sent to HHS after being stopped at the border. It’s true that ORR is on pace to take a record number of unaccompanied children into custody this year—but not by a margin that would require keeping nearly 24,000 children at its shelters. The bigger shift under Trump is that unaccompanied children are remaining in government custody for longer than they used to: Between 2016 and 2018, the average length of time children spent in ORR custody increased from 38 days to 60 days.

Why the longer stays? Children are usually released from government custody after parents or close relatives come forward to sponsor them. Last May, HHS and DHS entered into an information-sharing agreement that made it easier for those sponsors to be arrested if they were found to be undocumented. In June, HHS began fingerprinting all adults living in the homes of potential sponsors of unaccompanied children. The two changes are what likely caused the increase in custody times. By December, when HHS abandoned the household-wide fingerprinting requirement so that children could be released to sponsors more quickly, the number of children in government shelters had reached a record high of nearly 15,000. In 2015, ORR could hold fewer than 8,000 children at a time.

In February, Congress blocked the Trump administration from arresting sponsors identified through the information-sharing agreement. Children have gone from spending an average of 89 days in government shelters between October and December to 66 days between January and March, according to HHS spokesman Kenneth Wolfe. In April, HHS Secretary Alex Azar told Congress that his department had been releasing children more quickly recently, even though it was dealing with an increase in Guatemalan teenagers, who were harder to release because they were less likely to have relatives in the United States.

Even so, HHS’s 2019 budget requested that Congress provide up to $200 million in new “contingency” funding if the department needed to take care of more unaccompanied children than expected. This March, the department asked Congress for about $740 million in its 2020 budget request, citing “the historical, significant variability in program needs.” Just over a month later, the Trump administration is asking for $2.8 billion to cover a seven-month period.