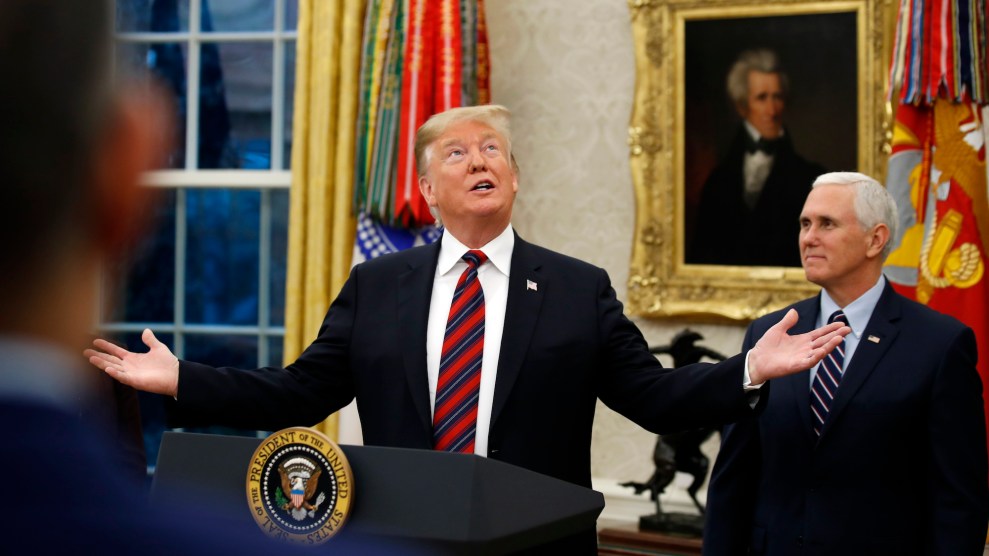 President Donald Trump speaks during a naturalization ceremony in the Oval Office in January.Alex Brandon/AP

Last year, President Donald Trump killed a bipartisan Senate bill that fully funded his border wall because it did not dramatically cut legal immigration. On Thursday, Trump unveiled an immigration plan whose central feature is a massive increase in high-skilled immigration and which wouldn’t result in any decline in legal immigration. Confused?

It’s not actually that complicated. The plan developed by Trump’s son-in-law Jared Kushner has no chance of becoming law. It is simply a messaging document for the 2020 campaign, designed to give Trump cover when he inevitably reverts to his preferred mode of portraying immigrants as snakes and other unspecified animals. Trump is not against immigration, the argument goes; he just wants certain kinds of highly skilled people.

Here’s what is known about Kushner’s plan, which is not an actual bill and may never become one. It would boost skills-based immigration from 12 percent to 57 percent of total immigration, while keeping overall legal immigration at about 1.1 million green cards per year. Prospective immigrants would be awarded points based on criteria such as offers for high-paying jobs, English language skills, and advanced degrees. To offset the nearly fivefold increase in skills-based immigration, Trump wants to eliminate the diversity visa lottery, which provides 50,000 green cards per year to citizens of countries with low rates of immigration to the United States. The plan would also limit family immigration, which allows relatives of legal US residents to immigrate, to children and spouses. That would stop immigrants from sponsoring siblings, and potentially adult children and parents, for green cards.

If the new high-skilled immigrants are anything like today’s, the main effect of the proposal would be a large increase in the number of immigrants from Asia. China, India, and the Philippines, are home to more than 80 percent of the people outside the United States whose employment-based visas have been approved by the State Department but are being held up by annual caps on how many visas can go to each country. Among people who are already in the United States and waiting to obtain permanent legal status—often immigrants working on temporary visas—78 percent were from India last year and 17 percent were from China. Just 5 percent were from the rest of the world.

Here are the education levels of all immigrants, which are lower than those for just recent arrivals:

Kushner’s proposal comes as the number of people crossing the southern border, generally Central American families seeking protection under US asylum laws, is at the highest level in more than a decade. His plan would address that by limiting asylum. The Trump administration has been pushing two policies for cutting asylum since 2017. One would seek to overturn a court settlement that prevents families from being detained for more than about 20 days—setting up a new deterrent to Central Americans thinking about coming to the United States. The other would reverse a law that makes it harder for the government to quickly deport Central American children. Democrats, who control the House, oppose both of those proposals.

How much Trump will talk about the new plan on the campaign trail remains to be seen. It’s hard to imagine the president, who’s surrounded himself with advocates of sharp cuts to legal immigration and routinely smears immigrants, celebrating a massive spike in immigration from Asia. In his announcement of the new plan from the White House Rose Garden on Thursday, began by focusing, as usual, on border security and the need to crack down on asylum-seekers. He then made a lethargic case for revamping America’s “totally dysfunctional” legal immigration system so that it favors “genius.” Trump argued that the current system of prioritizing family ties leads to a “random selection” of immigrants and undermines American values, even though family reunification has long been the bedrock of American immigration policy. (In reality, the Trump administration has worked to make life more difficult for high-skilled immigrants.)

Trump is traveling to New York for a fundraiser later on Thursday afternoon. The Washington Post reported that he was invited to attend an event celebrating the opening of a new museum at the Statute of Liberty, a perfect opportunity for Trump to showcase his newfound love of skilled immigrants. White House officials declined the invitation.

Christopher Ruddy, a longtime Trump adviser, is happy to see Trump moving in a more moderate direction, even if it’s only on paper. “The base is already with him,” Ruddy told the Post. “He could become a little more open on the immigration issue. I think it’s going to be very critical in states like Florida and Arizona.”

Not all of Trump’s allies are thrilled with the plan—especially not the nativists who heralded Trump’s rise and now fill his Department of Homeland Security. The anti-immigration Center for Immigration Studies supports a bill that Trump backed last year, which would cut legal immigration by about 40 percent. Now, the group’s executive director, Mark Krikorian, is no longer asking for that much from Trump.  “Even a little token cut would be OK,” Krikorian tweeted on Wednesday. But with support for legal immigration driven to historic highs by Trump’s xenophobia, the nativists can’t even get that anymore.