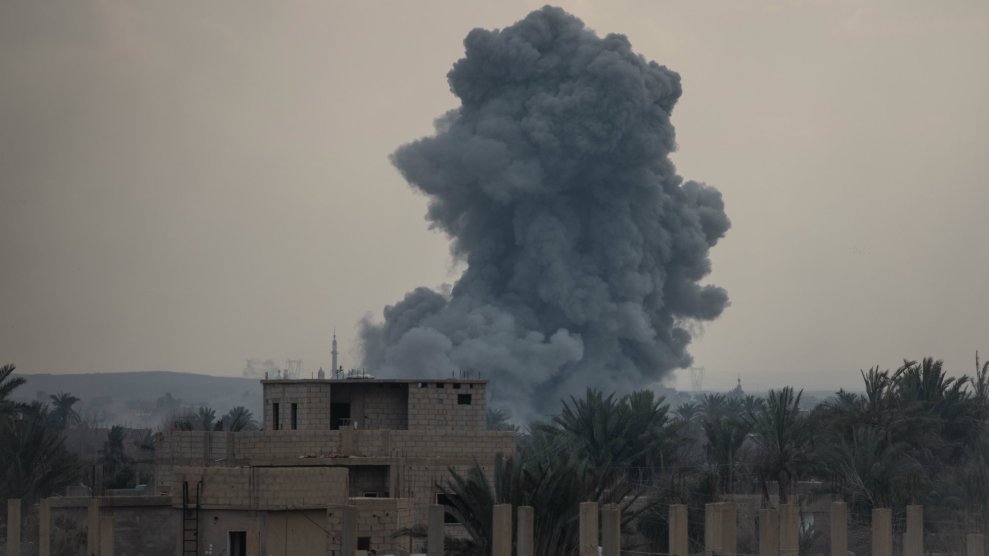 Airstrikes continued across Syria in February as the US-backed coalition worked to free the last vestige of territory from the Islamic State.Chris McGrath/Getty

The Pentagon acknowledged killing 120 civilians last year in four countries, according to a report submitted to Congress on Thursday. The figure falls far short of estimates determined by nongovernmental organizations and advocacy groups, and suggests the US military is not close to accurately accounting for the toll of its military ventures abroad.

“International NGO estimates of civilian harm are running at approximately ten times greater than DOD’s own estimates,” Chris Woods, the founder of Airwars, a London nonprofit that monitors civilian casualties across the globe, told Mother Jones. “There clearly is a systemic challenge here.”

The disparity is most stark in Syria and Iraq, where the United States has led more than 30 countries in a coalition against the Islamic State since 2014. This past year, Airwars concluded that more than 800 civilians were killed as a result of the coalition’s military action against ISIS, but the military in its report only confirmed 42 deaths. One explanation for this large discrepancy can be found in the slow process American officials use to determine civilian deaths. At least 70 strikes that may have killed civilians are still under investigation from 2017.

“These numbers simply are not credible.”

“These numbers simply are not credible,” Hina Shamsi, director of the ACLUs National Security Project, said in a statement. “As the Trump administration doubles down on the secrecy of its killing of civilians abroad, Congress needs to continue exercising its oversight power.”

When Congress first required the Pentagon to produce this annual report last year, its figures for 2017 were similarly skewed. Despite conducting more than 10,000 strikes to oust ISIS from its strongholds in Raqqa and Mosul, the US acknowledged fewer than 500 civilian deaths across all conflicts that year, including in Afghanistan and Africa. (The Pentagon did not break out specific figures for just the campaign against ISIS.) In this year’s report, DOD revised its previous report to include the deaths of 793 civilians in 2017 from those bloody campaigns, an astounding 59 percent increase in just one area of the world over the total global casualties described by the US for that year.

Lawmakers did flex their oversight muscles this time around. The Pentagon failed to break out individual strikes by date and location last year, as required by Congress, but individualized these figures this year and included total civilians killed per region instead of just an aggregate figure. The report also was delivered on time, as opposed to last year when it was submitted a month past its deadline and was met with criticism from advocacy organization like the ACLU, which said, “The administration’s low death claims cannot be meaningfully tested and therefore cannot be trusted.”

Glaring gaps continue to cloud the overall picture, but there were some improvements in the Pentagon’s overall level of transparency. Strikes were broken down by date, which helps advocacy groups fact check them, and the total civilians killed in specific areas of the world were included. The US neglected to include any strikes in Syria and Iraq from November, a time when Airwars was “tracking the highest reported civilian harm from Coalition actions since the capture of Raqqa,” or from December. The report says 28 other events that may have caused civilian deaths continue to be investigated, but without these figures, the aggregate data for 2018 remains incomplete.

The undercounting of fatalities is not restricted to Iraq and Syria. The report found only 76 civilians were killed in Afghanistan in 2018 due to US military action, despite the United Nations finding more than 400 deaths from “international military action” that year. This difference, officials noted in the report, was due to the UN lacking “access to all the information relevant to assessing whether civilian casualties resulted from US military actions in any particular instance.”

Further problems arise in Somalia, where the US has escalated its nearly two-decade fight against al-Shabaab, a terrorist offshoot of al-Qaeda, after Trump relaxed strike requirements there in March 2017. Americans began dropping bombs at a pace of more than 10 airstrikes per month, killing at least 230 terrorists, but US Africa Command still did not acknowledge a single civilian death since its creation as a combatant command in 2008. The discrepancy troubled independent researchers who had been interviewing witnesses of American airstrikes and family members of those believed to have been killed in them. Brian Castner, a former Air Force officer and Amnesty International senior crisis advisor, traveled to Mogadishu last year with several colleagues to figure out what the US had been missing. Their findings, which culminated in a bombshell report released by Amnesty in March, identified five airstrikes that it believed were responsible for at least 14 civilian deaths.

Africa Command sharply denied the initial report, noting in a nine-paragraph statement that its “post-strike analysis,” which uses “intelligence methods not available to non-military organizations,” found that “no AFRICOM airstrike resulted in any civilian casualty or injury.” That defense crumbled just 16 days later when Gen. Thomas D. Waldhauser, senior military officer for American forces in Africa, admitted that an April 2018 attack in central Somalia killed two civilians. In response to the Amnesty International report, Waldhauser had ordered a review of all 2017 airstrikes and uncovered a “reporting error” which led to Africa Command not realizing its mistake at the time. Curiously, the April attack was not one of the airstrikes featured in Amnesty International’s report—Castner told Mother Jones his group looked into the incident but was unable to verify the outcome—which leaves open the possibility that several other strikes, in addition to the ones already flagged by advocacy groups, resulted in civilian casualties undetected by the military.

“It feels sometimes like the United States is waiting for us to do the investigation and the heavy lifting,” Castner said. “The obvious question is: Why are we doing this and why aren’t you?”