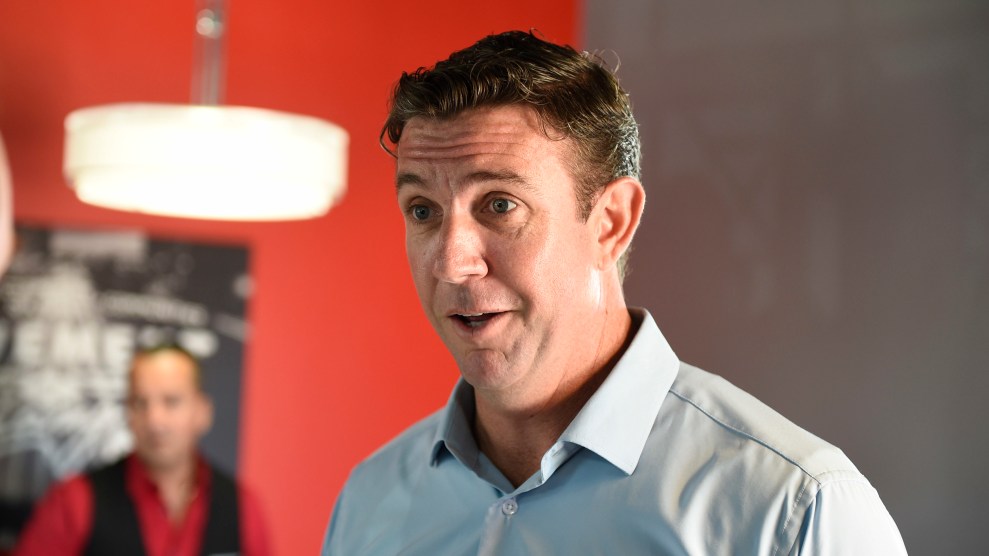 Rep. Duncan Hunter (R-Calif.) speaks during an interview at a call center on Nov. 6, 2018, in Santee, California. Denis Poroy/AP

On the evening of Oct. 27, 2015, Rep. Duncan Hunter (R-Calif.) met up with a lobbyist he knew through the D.C. social scene at a political event held at the Hamilton Hotel in the nation’s capital. Theirs was a professional relationship; she had supported his congressional campaigns in the past, having organized fundraisers and events for him. “That night, however, was not about business,” prosecutors from the Department of Justice wrote in toe-curling prose in a motion filed on Tuesday.

Around 11 p.m., the two left the hotel together, going to her home to engage in “intimate personal activities unrelated to Hunter’s congressional campaign or duties as a member of Congress.” At 1:23 a.m., he left her house, using campaign funds to pay for $42 in Uber fares to do so. For now, she is known only as Individual 17, and she is not the only one featured in stories involving booze or vacations or late-night and early-morning Uber rides that all point to meetings of an “intimate” and “personal” nature. Apart from I-17, there is also an I-14, I-15, I-16, and I-18. None is his wife.

“Without this evidence, the jury might be left to believe—wrongly—that Hunter’s ‘meetings’ with these women, and the associated expenditures, were work-related; after all, Hunter had professional connections to each of them. The intimate nature of these relationships is, in short, direct proof an essential element of the crimes charged in the indictment, and as such it must be admitted to show Hunter’s knowing illegal expenditures of campaign funds,” prosecutors wrote in making the case to admit their evidence, which they note is of a “voluminous nature” and includes eyewitness testimony, e-mails, text messages, phone logs, photographs, social media messages, and more.

The case against Duncan Hunter of the “Bros Caucus” is the gift that keeps on giving. The trial is scheduled for Sept. 10, and it promises to be every bit as entertaining as Tuesday’s filing. As a reminder: It was just three months after Hunter and his wife Margaret were hit with a 60-count indictment over allegedly misusing more than $250,000 in campaign funds that the voters of California’s 50th district reelected him—despite his inability to serve as a full-fledged members of Congress. Since the indictment landed, he’s been stripped of his committee assignments and isn’t even allowed to help craft bills.

But just because he’s had little official work to do doesn’t mean he hasn’t been busy. In April, he attempted—and somehow failed—to illegally cross the border into Mexico in an effort to show how dangerously porous it is. According to the Border Patrol, he was actually 100 meters off his mark, and that turned out to be a good thing for him because one of the conditions of his release was not to leave the continental United States. In May, and again in June, he admitted to war crimes while defending the Navy SEAL Chief Eddie Gallagher, who has been charged with war crimes. Most recently, upon hearing the news that his wife Margaret had changed her plea from not guilty to guilty, he doubled down on previous claims that he is the target of a politicized Justice Department, that this is all the work of the so-called Deep State.

Below, we’ve collected everything Hunter and/or his wife allegedly purchased using campaign funds. The list includes beer, golf, more golf, more beer, vacations, Uber rides to and from the various homes of various “individuals,” Walmart, steak houses, and Star Wars swag. Included in the top-line numbers but alas unenumerated is the $600 we know he spent on plane tickets for his pet rabbit, Eggburt. In all, the indictment is a portrait of the good life, as envisioned by the social chair of a particularly ambitious Phi Delt chapter. We’ll update as warranted.

First, the top-line numbers. All told, the Hunters “illegally converted and stole more than $250,000 in campaign funds” to pay for personal goods and services, according to the indictment. This amount included:

And here’s the itemized tab, according to the indictment. It begins in January 2010, with a vacation to the Sierras to see Individual 14: