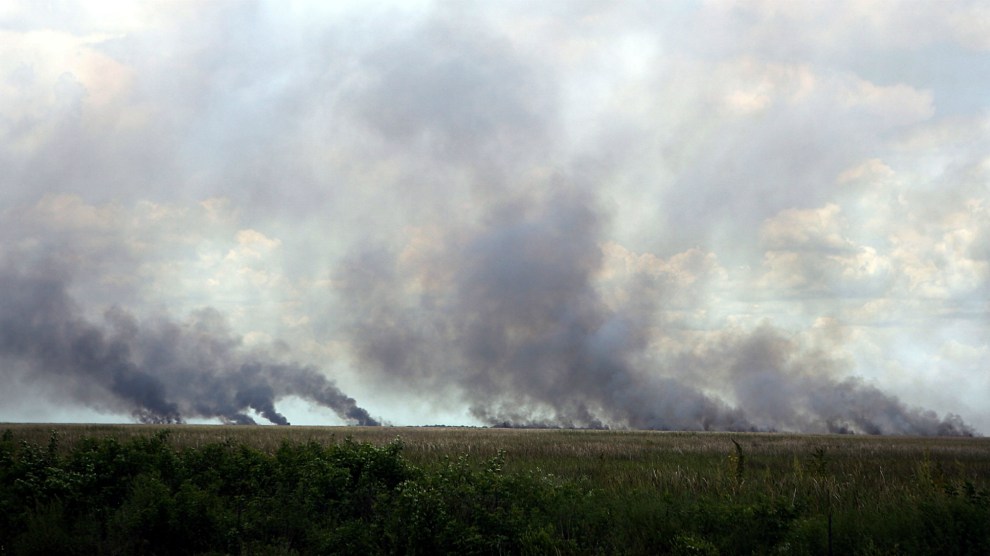 Wildfires burned in the Florida Everglades in 2007. Now there's another wildfire in the Everglades, right before the Democratic debates.Marc Serota/Getty

On Wednesday, the first Democratic debate will take place in Miami, Florida. The candidates will engage in what is sure to be a heated conversation about issues ranging from gun control to abortion rights. As all eyes turn to Miami, another fiery event is developing nearby.

Seventeen thousand acres and counting of public lands are aflame in the Florida Everglades, thanks to a brush fire sparked by an errant lightning bolt on Sunday night. Smoke from the fire has floated over the cities of Coral Springs and Parkland, prompting officials to send out advisories warning residents to stay inside.

It's two days before the Democratic debates in Miami where climate change is likely to be a big topic and as if on cue, there's a 17,000 acre wildfire in the Everglades pic.twitter.com/Ng2GYMYGaZ

According to the region’s Local 10 news, no firefighting crews have been called to combat the flames as of Monday afternoon; officials said they’re monitoring how the fire moves over the next eight to 10 hours. So far, none of the blaze has been contained. Rain is not in the forecast until Wednesday.

Florida isn’t the only state in the U.S. dealing with the fiery fallout of mismanaged forests and rising temperatures. Last week, Seattle Mayor Jenny Durkan announced plans to outfit five community buildings in her city to help residents deal with the impending smoke season. And California is facing an increased risk of wildfires this summer thanks to a wet winter that helped spawn new brush (aka kindling, once hot weather dries the brush out).

The average wildfire season is 78 days longer than it was in 1970, a side effect of climate change that should surely be a topic of conversation at the Democratic debates. Alas, the Democratic National Convention announced this month that it will not be hosting a climate-themed debate—a request made by various climate activist groups and presidential hopeful Jay Inslee. Maybe the smoke from the fire in the Everglades will convince the committee to change its mind.