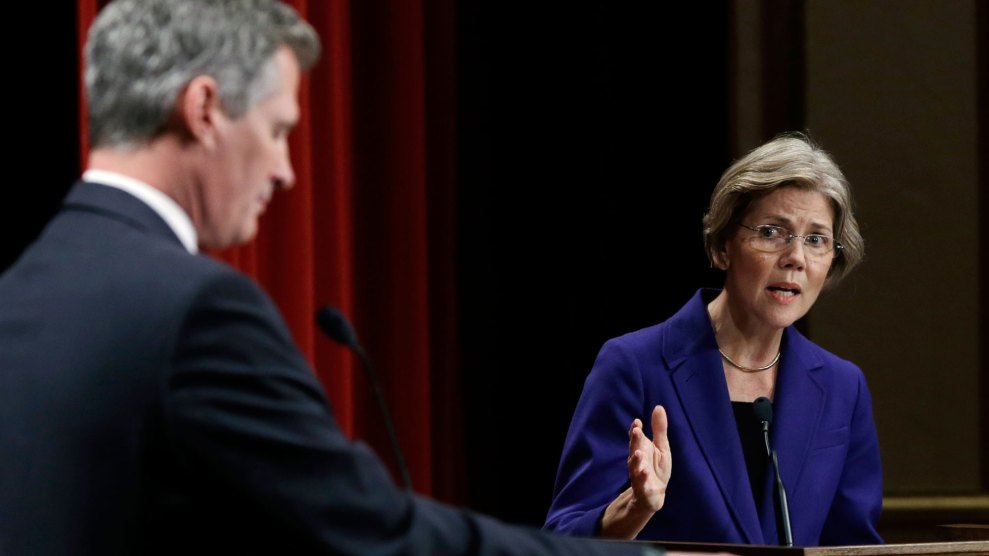 On Wednesday, Massachusetts Sen. Elizabeth Warren will join nine other candidates for the first of two Democratic presidential debates this week in Miami. Due to the size of the field, the 20 candidates who qualified are split between two nights, and the end result might feel anticlimactic. Two of Warren’s top 2020 rivals, former Vice President Joe Biden and Vermont Sen. Bernie Sanders, will take the stage without her on Thursday. But for Warren, it’s a chance to showcase her unusual talents as a debater, as she makes the case for herself to a national audience.

Unlike Sanders and Biden, Warren has never had to distinguish herself from the competition on a primary debate stage. But her three debates with Republican Sen. Scott Brown in 2012, and her experience as both a witness and interrogator at Capitol Hill hearings, offer a glimpse of how she could perform not just against her fellow Democrats but also, if she makes it that far, against Trump.

“She was so good at those debates we were in no hurry to reschedule,” says Eric Fehrnstrom,  a top strategist for Sen. Scott Brown. “The debates were helping her more than helping us.”

After chairing the panel established by Congress to provide oversight of the Wall Street bailout and later shepherding the Consumer Financial Protection Bureau into existence, Warren was already a progressive celebrity by the time she decided to run against Brown. But she was untested when it came to electoral politics. Polls in the run-up to the candidates’ first debate in September 2012 showed a tight race. Brown’s campaign saw an opportunity to make up ground.

“She was a first-time candidate. I thought we’d get an out-of-touch intellectual from the faculty lounge at Harvard,” says Eric Fehrnstrom, a top Brown campaign strategist.

From the first minute of the first debate, Brown tried to emphasize his opponent’s elite credentials and rattle her with insinuations about personal hypocrisy and opportunism. Brown, who had excelled in one-on-one debates with Democrat Martha Coakley during his 2010 special election by playing up his regular-guy bona fides, insisted on referring to his opponent as “Professor Warren” and criticized her in his opening statement during their first debate for identifying herself as Native American in questionnaires at Harvard and the University of Pennsylvania.

“Professor Warren claimed that she was a Native American, a person of color, and as you can see, she’s not,” Brown said.

“I was going to start this by saying that I think that Senator Brown is a nice guy, and that what this race is about is the issues,” Warren retorted.

Brown sounded caught off guard. “Uh, first of all I want to, uh, you’re a nice woman too,” he said.

During their debates, Brown flogged the list of corporate clients Warren had taken on as a private attorney and went after her repeatedly on her Native American controversy—correctly identifying a vulnerability that would dog Warren for years. But every time he did, Warren pivoted with metronomic persistence to the ideas of economic inequality and corrupt institutions that animated her run. Whenever the debate threatened to veer off course, Warren brought it back to her message.

Warren, Fehrnstrom says, “was a highly disciplined candidate” who thrived in the structured, “rules-based” format of the debate. “She is very adept at operating within those rules, and making sure everybody else operates within those rules. And then she goes back again and again to her core message—the middle class getting crushed by a rigged system—and it’s very effective.”

So effective, in fact, that it caused the Brown campaign to rethink its early eagerness to debate. When in late October 2012 Superstorm Sandy forced a postponement of a fourth and final face-off between the two candidates, Brown initially offered to drive Warren to the debate in his pickup truck to make it happen. But that was just bluster.

“She was so good at those debates we were in no hurry to reschedule,” Fehrnstrom says. “The debates were helping her more than helping us.” The fourth showdown was eventually scrapped.

Warren’s aptitude for debating shouldn’t come as a surprise. In her 2014 memoir, A Fighting Chance, she called debate her “one talent” in high school and she attended George Washington University on a full debating scholarship.

But to really understand what makes Warren tick as a debater, it’s worth looking at how she has conducted herself in the debate-ish format of Capitol Hill hearings, which—as a bankruptcy expert, government watchdog, and senator—Warren has experienced from all angles. As a witness, she was, as Brown would find, relentlessly on message and a stickler for rules. (Just watch this 2011 exchange with Rep. Patrick McHenry, a North Carolina Republican, when she was working with President Barack Obama to develop the Consumer Financial Protection Bureau.) As an interrogator, Warren has a knack for cutting through bullshit with a pointed question. She makes moments.

Tim Geithner was one of the first to experience it:

After Stumpf did resign, it was his successor, Timothy Sloan’s turn:

Perhaps the most revealing instance of Warren’s political jousting came in 2005 when she appeared before the Senate Judiciary Committee to testify against a bill backed by Biden, then a Delaware senator, to overhaul the nation’s bankruptcy laws. Warren believed the legislation would place a greater strain on working people; Biden, whose state is home to many credit-card companies, believed she was unfairly demonizing the industry.

So they went at it in a tense back-and-forth that got to the heart of where both of them were coming from ideologically. The exchange featured Biden at his most Biden—as my colleague Pema Levy has pointed out, persistent interruptions are his favorite weapon. But it was also Warren at her most Warren. Every time Biden jabbed, she redirected the discussion back to her message (which is still her message) about the people getting squeezed, and the people who are squeezing them. By the time it was over, Biden seemed ready to throw in the towel.

After Biden sought to redirect Warren’s ire to predatory interest rates (rather than fixing bankruptcy proceedings), she responded: “Senator, if you are not going to fix that problem, you can’t take away the last shred of protection from these families.”

“I got it, okay,” Biden said. He paused a beat and added: “You are very good, professor.”

For a variety of reasons—the number of candidates, the lack of popular interest in bankruptcy law, the existence of moderators—the 2020 Democratic primary is not likely to produce a single exchange as intense, as lengthy, and as revelatory as that back-and-forth from 14 years ago. Warren and the former vice president won’t even share a stage together until July, at the earliest. But if her rivals are smart, they’ll watch it a few times to prepare for facing Warren. Both Scott Brown and Joe Biden learned the hard way.