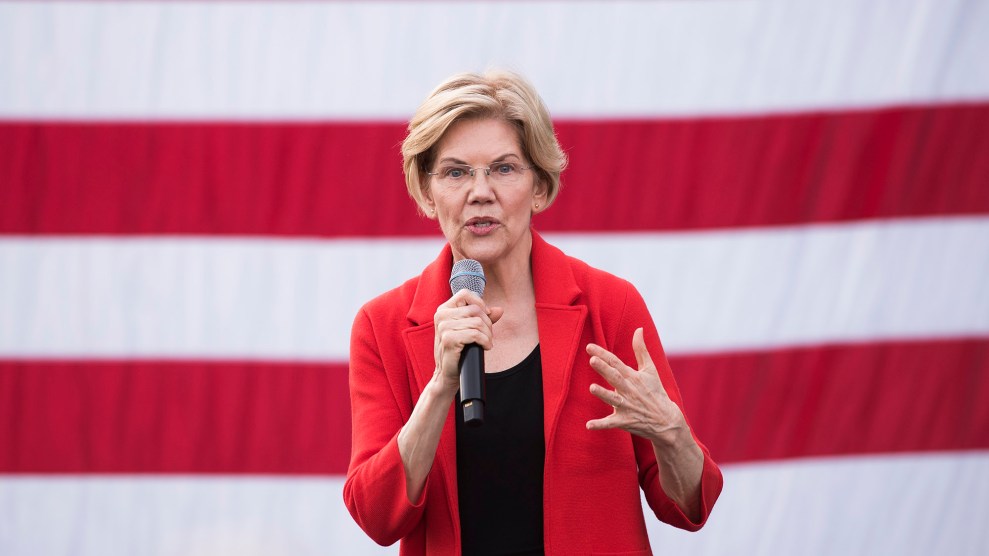 Sen. Elizabeth Warren at a campaign rally in VirginiaCliff Owen/AP

Elizabeth Warren is having what political reporters like to call “a moment.” This policy maven seeking the White House has risen to third place in the Real Clear Politics national polling average of Democratic voters, trailing frontrunner Joe Biden and second-placer Bernie Sanders but surpassing Kamala Harris and Pete Buttigieg. Better yet for Warren, she placed an eye-popping second in a YouGov/Economist poll released Wednesday, 4 points ahead of Sanders. And she has been scoring well in key primary states, running second in a recent Nevada survey and essentially tying for second in Iowa and California polls. These numbers have reasonably prompted headlines suggesting a Warren surge. But this uptick is more than a serendipitous development, for Warren has become the slow-and-steady candidate, slogging along and gaining ground inch by inch. That’s how the law-professor-turned-senator and her team have always seen her—and that’s all part of her plan.

How many Democratic presidential candidates do not have to explain why they’re in the race?

When Warren announced her presidential bid on the last day of 2018—an early entry into the fray—the commentariat consensus was that she was coming into the game with a self-inflicted injury: the DNA test she took in response to Donald Trump’s “Pocahontas” taunts that she said showed she did have (a smidgen of) Native American ancestry. A kitchen-table populist who used to sparkle with wit, smarts, and conviction on late-night comedy talk shows and who once was a Democratic idol, Warren was now portrayed as damaged goods—practically a non-starter, a once-upon-a-time golden prospect who had lost her shine. It was not uncommon to hear pundits muse that she should have run in 2016 when Warren stock was selling high. Surely, some political observers noted, she now lacked the quality most prized by Democrats: electability. Yeah, she was intelligent, sharp on the issues, and effective. (Has any other Democratic contender given birth to an agency that takes on the big banks and credit card companies?) But how could a wounded candidate do battle with Trump the Slasher?

But she persisted. (Sorry about that.) That is, Warren did have a plan. Not just a plan for this or that policy problem. She had a strategy for winning the Democratic primary and, possibly even better, a raison d’etre for her candidacy. And she and her crew knew that it was a plan that would be implemented with patience over a long haul in a super-saturated field and that it was based on a natural advantage: Democratic voters would understand why Warren was running. Unlike many of the other White House wannabes, she would not have to explain or brand (or rebrand) herself. She was, as the slogan now goes, the candidate with plans. She was an ardent champion of consumers, a foe of Big Finance rip-off artists, and a policy nerd who did sweat and understand the details—and who relished presenting polished proposals on practically anything. She would not have to devote time to introducing herself to the Democratic electorate or justifying her run for the White House—a task that burdens much of the Democratic field, including many of her Senate colleagues who have dived into the pool.

And this liberated Warren and her operation. The campaign’s strategists did not have spend time each day figuring out the rationale for her candidacy and how to sell whatever it was to potential voters. On a daily basis, she would do what she always has done and what she enjoys: talk about problems and potential solutions. This had an obvious benefit: Warren was being authentic. And her staff was freed from the burden of messaging—meaning, developing pitches until one works. (Remember the painful process Hillary Clinton’s campaign went through in this regard?)

The Warren gang was partially freed from another weighty responsibility: fundraising. Not all fundraising. But in February she announced she would not raise campaign cash via high-ticket dinners and receptions or through dialing-for-dollars calls to wealthy would-be donors. The campaign promoted this as a move demonstrating that Warren would not grant access to rich contributors; she would not be selling influence and would instead rely on small-dollar donors. What a contrast to the big-money politics that dominates both parties.

This decision that burnished her reformist credentials had a critical impact on the campaign: It unshackled her schedule. Most presidential candidates get tied down making begging-for-bucks calls to well-heeled folks and jetting to fundraisers (in the usual places: New York, Washington, Los Angeles, San Francisco, and a few other key cities).

Warren now could spend more time on the road speaking about problems and her plans. She went to Long Island City in Queens—where Amazon’s proposal for a big campus was shot down—and unveiled a plan to break up Big Tech. She pitched that plan at South by Southwest in Austin, Texas, too. She traveled to Puerto Rico to discuss how to improve the recovery programs in the lingering aftermath of Hurricane Maria. In Indiana and Michigan, she spoke about her economic plan that included “aggressive intervention on behalf of American workers.” She hit the Mississippi delta to push an ambitious affordable housing plan. She whistle-stopped in West Virginia and Ohio to promote a 10-year, $100 billion opioid crisis plan. Within the campaign, her aides saw this as similar to how Robert Kennedy campaigned for president in 1968. Perhaps that’s a bit over the top. But in any event, it’s not a comparison she or her aides are making publicly.

Warren also leapt into the contest early so her campaign could get a head start on building organizations in the first-up primary states. She decided not to horde money raised but to spend it on developing these structures. The political press noted her campaign had a high burn rate, meaning it was racing through the money it was bringing in. But Warren and her aides opted to invest early in the ground game. The Daily Iowan recently reported that Warren had more than 50 paid staffers across the Hawkeye State—the most of any campaign—and has “hosted a plethora of small organizing events” since early this year. Other campaigns have also raced to put up a grassroots operation in the kick-off states, but Warren got there ahead of most.

Much of the Warren campaign’s decision-making has been predicated on the assumption that come the end of 2019 and the start of 2020—in the weeks before the Iowa caucus in early February—there will be saturation coverage of the Democratic contest on social media and within the news media. In such an environment, costly television ads may not be so effective. Consequently, there is less need to bank money to pay for such spots and more reason to devote resources to on-the-ground troops. (The early California primary, though, may be a challenge for any candidate who has not built up a reserve of cash, for it can be tough to campaign in that big and delegates-rich state without buying ads in expensive media markets.)

Warren and her team also thought long and hard how she should deal with the press—and came up with a plan based on lessons learned. When she arrived in the Senate in 2013, she was already something of a media star. But she ratcheted back on her interactions with the Fourth Estate. There were fewer interviews, fewer exchanges with reporters. And her skills as a jouster diminished. She became rusty dealing with journalists. That had to change, and she and her advisers concluded she needed to rebuild these muscles and prepare for the debates and the high-pressure stretch of the campaign later this year when attention on her and other in-the-hunt contenders will be intense. So she has been giving reporters opportunities to question her on the campaign trail and throwing herself into numerous town hall meetings, spending time talking to and bantering with voters. The big idea: When there is more media focus on the campaign, she will be at the top of her game in communicating with reporters and voters.

What is particularly striking about the Warren campaign is just how closely she has stuck to the mapped-out plan she and her advisers drew up at at the start of the race. Warren wanted to be viewed as the candidate of substance who talks about serious matters—and who does this better than the rest. And she has come to occupy what pundits insist on calling that “lane,” elbowing aside other candidates, especially those other senators, who want to run on their policy chops. Warren’s prodigious production of policy proposals is now a punchline. But it’s a good punchline. On Twitter, a comedian asked, “Do you think Elizabeth Warren has a plan to fix my love life?” Warren quickly replied, “DM me and let’s figure this out.” And her campaign, leaning into this running joke, is selling t-shirts that say, “Warren has a plan for that.”

How many of the Democratic candidates have a mantra or a tagline? How many do not have to explain why they’re in the race? Only a few. And Warren, despite the political scars she entered the contest with, is one of them. She and her advisers had a clear idea of how she could succeed in this overflowing cast, and at this juncture, they look darn savvy. She’s still far behind Biden in the polls, but the name of the game now is to be close enough to exploit a possible Biden falter. The landscape of the 2020 race can certainly shift dramatically at any point. But it’s important to realize that for Warren, the woman with a plan, this burst is not merely a moment, it’s what she and her staff would call implementation.