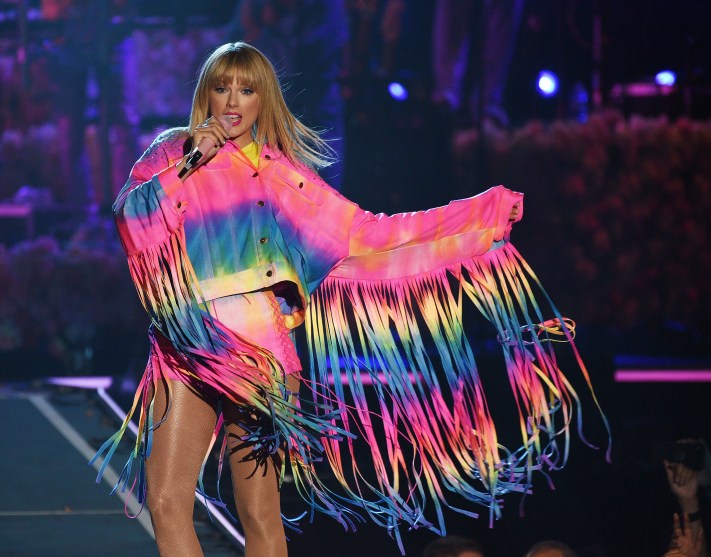 This week: “You Need To Calm Down” by Taylor Swift (Republic Records, 2019)

Why we’re into it: This is a great pop song, even if we can’t excuse the weak allyship.

From the moment the first beat hits, it’s clear this is a Taylor Swift song. In what’s become a signature of hers, the song comes in hot, wasting no time sinking its Swifty pop hooks into your ears. She arrives within the first few seconds on a bouncy synth beat, flipping iambs into trochees (“Patrón” is rendered “PUH-trone”). It’s catchy and fun, an earworm of a pop song, and it revives a bit of hope that her next album Lover won’t be the mess that “ME!” was. It is also, yet again, her take on trying to “own” the haters. In this case? Homophobes.

Under all the rainbows and catchy hooks, “You Need to Calm Down” is allyship misunderstood.

Earlier this month Swift posted a much-circulated letter addressed to her Republican senator, Lamar Alexander of Tennessee. In it she asked Hunt to support the House Equality Act, a sweeping bill that would protect LGBTQ people from discrimination in our workplaces, our schools, and in other public accommodations. It was a bold and unexpected move from the apolitical pop star. But that old, apolitical Taylor is dead. From old Taylor’s ashes has risen a new outspoken pop star who hopes she’ll release a more blatant political pop song.

🌈HAPPY PRIDE MONTH!!!🌈 While we have so much to celebrate, we also have a great distance to go before everyone in this country is truly treated equally. In excellent recent news, the House has passed the Equality Act, which would protect LGBTQ people from discrimination in their places of work, homes, schools, and other public accommodations. The next step is that the bill will go before the Senate. I’ve decided to kick off Pride Month by writing a letter to one of my senators to explain how strongly I feel that the Equality Act should be passed. I urge you to write to your senators too. I’ll be looking for your letters by searching the hashtag #lettertomysenator. While there’s no information yet as to when the Equality Act will go before the Senate for a vote, we do know this: Politicians need votes to stay in office. Votes come from the people. Pressure from massive amounts of people is a major way to push politicians towards positive change. That’s why I’ve created a petition at change.org to urge the Senate to support the Equality Act. Our country’s lack of protection for its own citizens ensures that LGBTQ people must live in fear that their lives could be turned upside down by an employer or landlord who is homophobic or transphobic. The fact that, legally, some people are completely at the mercy of the hatred and bigotry of others is disgusting and unacceptable. Let’s show our pride by demanding that, on a national level, our laws truly treat all of our citizens equally. 🌈🌈🌈🌈🌈🌈🌈🌈🌈🌈🌈🌈🌈 Click the link in my bio to sign the petition for Senate support of the Equality Act.

Swift has a lot of experience in dealing with haters and that experience shines when she’s singing about that. “Say it in the street, that’s a knock-out. But you say it in a tweet, that’s a cop-out.” It’s when she tries to include this idea that homophobes need to “calm down” that she falters and stumbles into the tropes that many queer people struggle with in their allies.

This “can you just stop?” attitude is where many allies fall short, not just Swift. LGBTQ people are still facing hatred, barriers, and violence, at astonishing levels. Governments around the world and here in the US are attacking us. We’re still fighting every day for our humanity to be recognized. The idea that we can just ask oppressors to stop stems from the same assumption that homophobia is nothing more than a character flaw; it’s right around the corner from the idea that “all sides” deserve respect.

It’s time for allies to evolve. LGBTQ people need accomplices now. An accomplice is someone who is putting as much on the line, maybe even more, than the other. An accomplice ends up in jail with you. An ally is someone you hope will answer your one phone call.

While “You Need to Calm Down” features a shoutout to the LGBTQ organization GLAAD and an allusion to those infamous homophobic protest signs, its message of allyship is half baked and loaded with the sentiment that queer people need to accept any handout of humanity allies provide.

Taylor is at her best when she’s her exaggerated self. That’s what’s always made her so fun. Within all the nonsense, there was a sliver of self-awareness. But “You Need To Calm Down” has no semblance of that. Instead it comes off like another #Pride campaign tailored to make money off of queer people.

Taylor’s not ill-intentioned at all; in fact, it’s quite the opposite. Allies aren’t bad people, no, no, no. It’s just that right now LGBTQ people don’t need allies. We need accomplices.